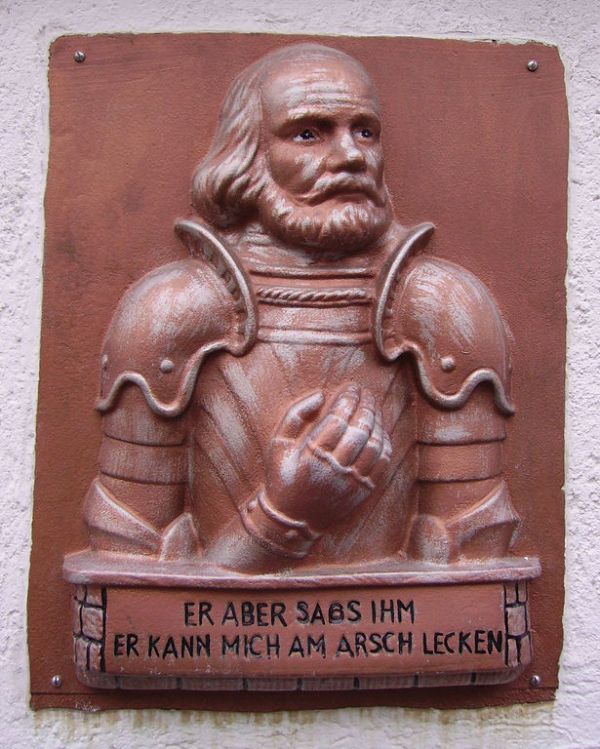 Götz von Berlichingen, born in 1480, was a notable knight and warrior, whether he was fighting for the Holy Roman Emperor, various kings and nobles, as a mercenary, or for his own purposes. He became a soldier as a teenager and continued fighting and leading armies in various forms until his old age, even after his right arm was amputated on the battlefield. Berlichingen commissioned an iron prosthetic hand, the second of which was so elaborately-designed that his fingers could hold a quill. But it was something else that really made Berlichingen a legend.

Götz von Berlichingen is perhaps best remembered for one of his witty catchphrases. In 1516, during the above-mentioned feud with Mainz, he was laying siege to a castle, attempting to lure the bailiff out on the ramparts. When the bailiff finally appeared, Götz famously said to him after an altercation: “Er solte mich hinden lecken!” or “Er kann mich im Arsche lecken!” Both phrases can be translated to “He can kiss my ass!” Saying this, he defiantly rode away. The phrases remained as an iconic symbol of his willful defiance and became known as the “Swabian greeting.” Today it is used throughout Germany as a witty and light comeback.

Read about the military leader with an iron hand and a witty tongue at Historic Mysteries. -via Strange Company