I grew up in a very warm, supportive, and loving family. So for me, it’s difficult to understand how somebody might not want to help a relative in need. Especially if that call for help means that you’ll spend some precious time with your loved ones.

The AITA community over on Reddit had a field day when one user, u/iri_baker67, a grandmother who has a 29-year-old daughter and 1-year-old grandson, asked for their verdict on her behavior. The grandma shared how she refused to babysit her grandson for free and explained why she wanted to charge her own daughter some serious cash for the privilege.

It’s a very frustrating post to read, and many redditors couldn’t believe their eyes. Scroll down for the grandma’s full story. When you’re done reading, let us know in the comments what you think about her actions and reasoning. Do you agree with most redditors that she was way out of line? Or do you think that things aren’t as black and white as they seem?

Bored Panda reached out to have a chat about babysitting with British comedy writer, author, and single mom Ariane Sherine, who has a 10-year-old daughter. “I personally ask relatives and friends to babysit first, as I know and trust them already, and would only then try contacting a professional babysitter if they were unavailable,” she told me what her approach is. “My daughter Lily has an adopted grandad called John who she adores and feels very safe with, so he’s my first point of call. He’s so much fun that Lily is nearly as happy being with him as she is with me.” Ariane has written a wide variety of books, including ‘How to Live to 100,’ and has recently brainstormed a range of funny and witty Christmas merch together with her daughter after she caught the coronavirus. Scroll down for the full interview. 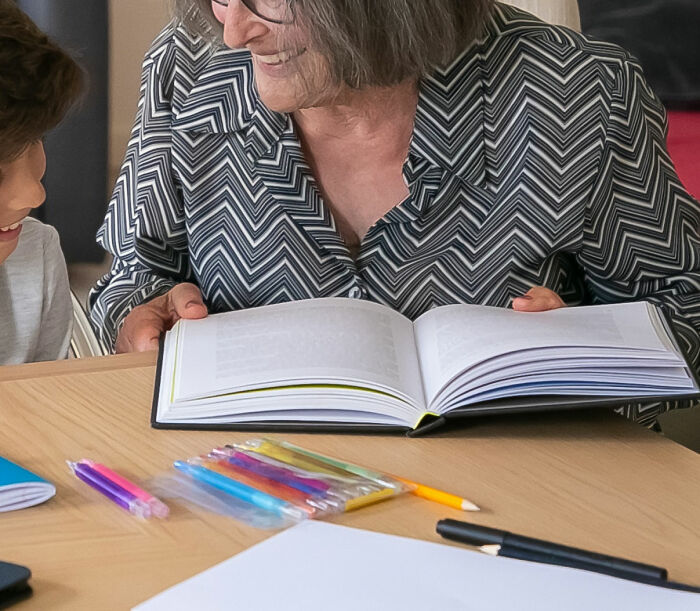 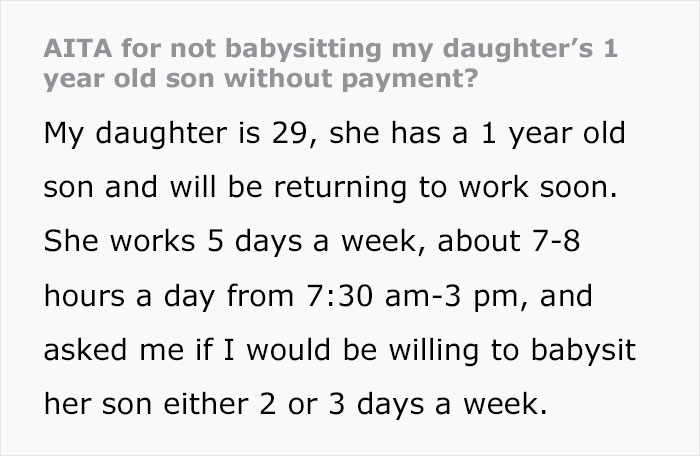 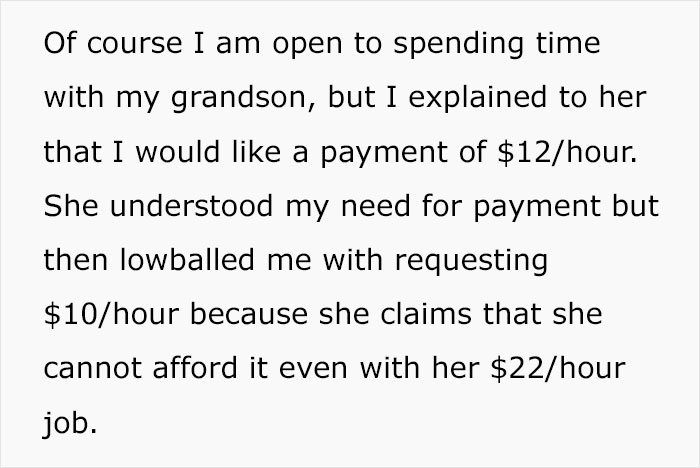 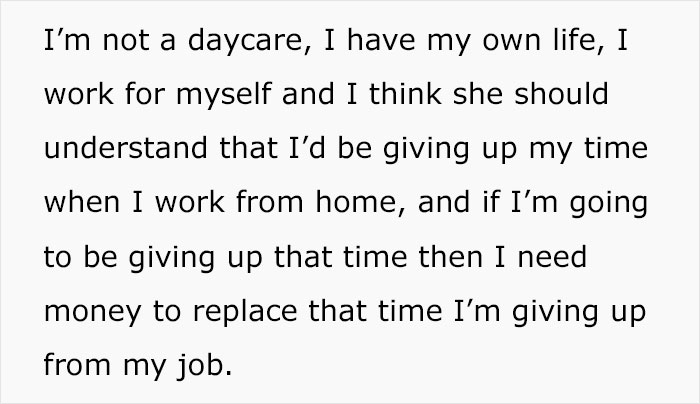 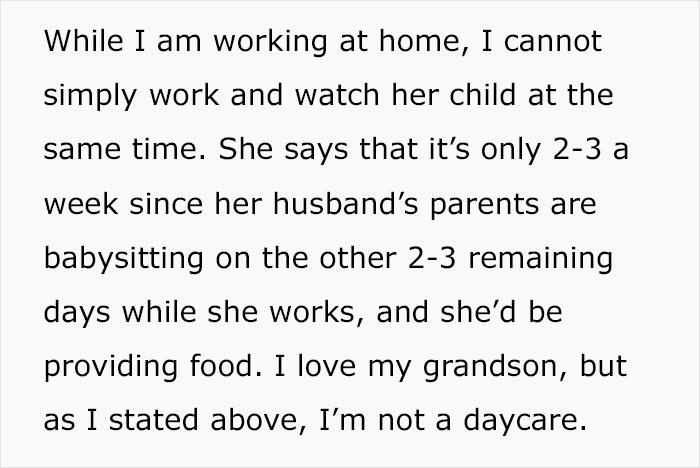 I was very interested to hear Ariane’s take on the link between age and maturity in kids. Here’s what she had to say to Bored Panda. “I think age and maturity are often linked—my daughter is very mature for age 10, but I’m also a very overprotective mum so I think it’ll be a long time before I’ll be ready to leave her at home alone. Even though it’s Christmas! I’m not Mrs. McCallister,” she quipped, referring to the ‘Home Alone’ films.

However, the mom noted that she’s been helping her daughter improve her level of independence. “I did help her with her independence by allowing her to go on a school camp retreat last month where I couldn’t speak to her for a week. It was pretty rough for me as I couldn’t contact her for the first time since she was born. She had a great time with her mates though and I’m pretty sure she didn’t miss me at all!” she said.

Ariane also told Bored Panda about how having a kid is a “huge adjustment” for new parents. “It’s hard to get the balance right between work, life, and family. I’m always working hard on some creative project and Lily can get very annoyed if she doesn’t have my full attention! One of the biggest challenges is adjusting your perspective and always putting the child first but also making self-care a close second priority. I don’t know if any parent ever gets it exactly right but the main thing is to try!”

The crux of the Reddit-using grandma’s argument is that she’s “not a daycare” and shouldn’t be doing anything for free because she “has her own life.” In her original post, the redditor wrote that she asked her daughter for 15 dollars per hour, however, she later edited her story to make it 12 dollars per hour. Some redditors thought that the grandma did this to make herself seem less guilty.

Personally, I think that’s a very cold and calculating way to go through life, but then again, I might be too cuddly and gushy of a Panda myself.

I think that money should only enter these sorts of babysitting situations in purely symbolic terms. Perhaps the grandma could ask for a wholesome cup of tea and a homemade meal as a reward. Or she could juggle her job with spending time with her one and only grandson. Then again, many internet users would probably say that being with your grandchild and helping your own daughter are rewards enough.

While many babysitters often don’t get paid enough and are undervalued by parents, some professionals stand to make quite a bit of money. For instance, a professional nanny revealed to me earlier that she used to get 700 dollars per week, on top of various perks. However, she stressed to Bored Panda the fact that plenty of babysitters have to deal with extremely demanding parents for a low wage.

“I think they [the parents] believe that it’s their child that they are raising the way they want to (which I do agree with, to an extent) and all rules should be blindly followed. But some nannies (like myself) have been in the field for many years and can offer valuable insight and advice, which they are rarely willing to take because parenting is so personal,” the nanny explained that lots of parents are unwilling to listen to any advice, even from a professional. They feel that they always know best.

“That’s the same reason I believe they often don’t want to offer adequate compensation: it’s personal. They’re (most likely, in my experience) paying you under the table, they’re trying to get a good deal, and they love their child. They don’t think that looking after their ‘precious angel’ is a job; it’s a treat. They would love to be home with their child all day, so I think they feel like it’s not a real job. It’s something you get to do, and they’re mad they have to pay someone to do it,” she told Bored Panda.

“They love their child, they’d do anything for their child. There’s a connection there that someone else could never have, and they can’t imagine not having that connection, so they treat it like it’s not a job, it’s a privilege. The ‘you’re so lucky you get to stay home with my baby while I have to go to work’ mindset, when in reality we leave our families to take care of yours; we don’t want to leave our families in the morning for work any more than you do, but it’s our job.”

Most Reddit users were unanimous: the grandmother was clearly in the wrong. Here’s what they had to say 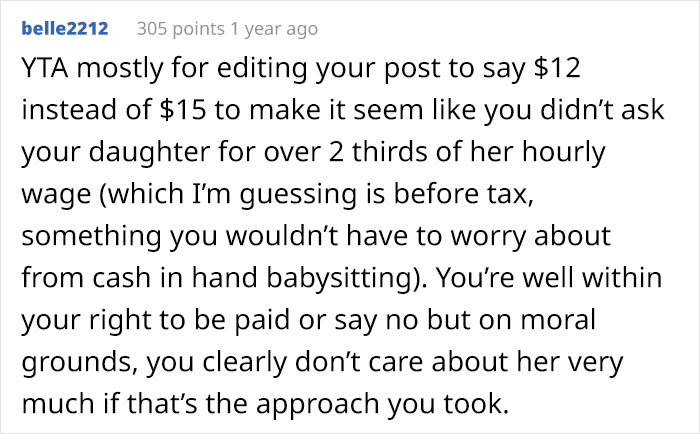 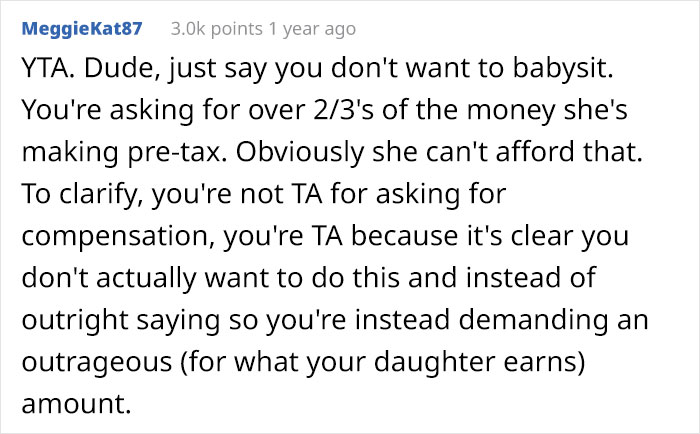 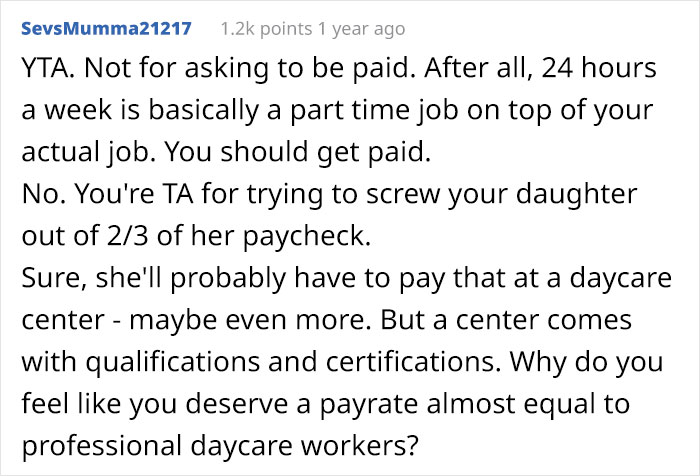 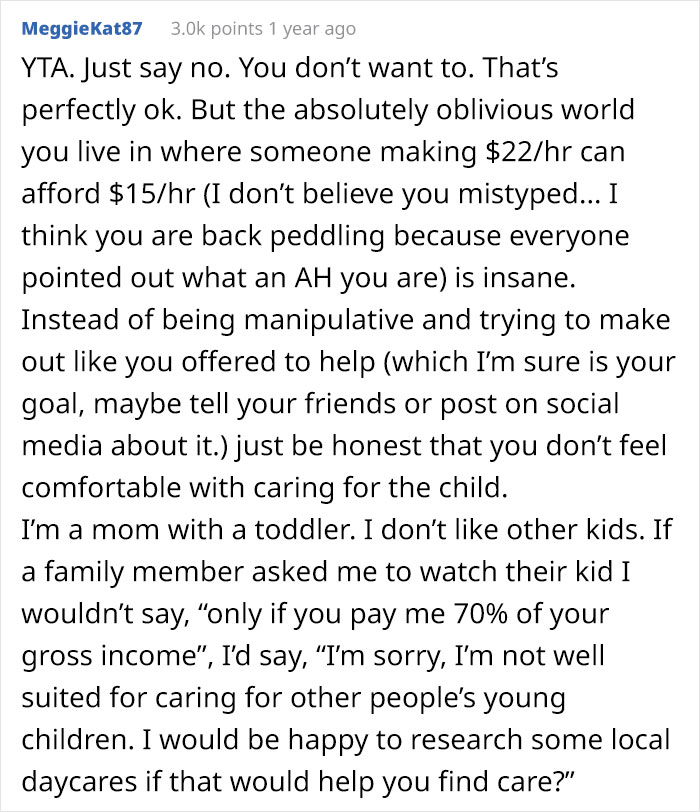 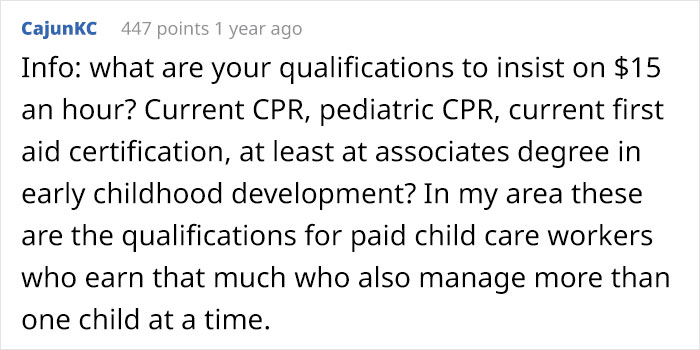 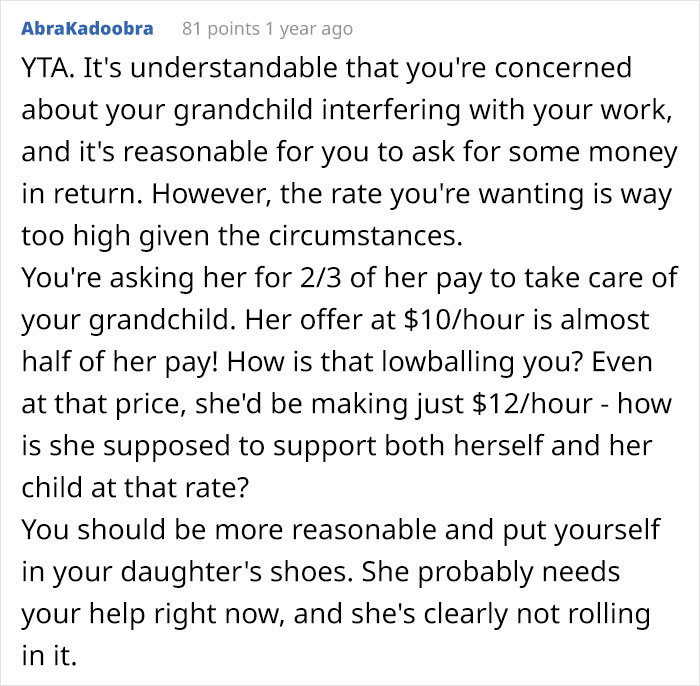 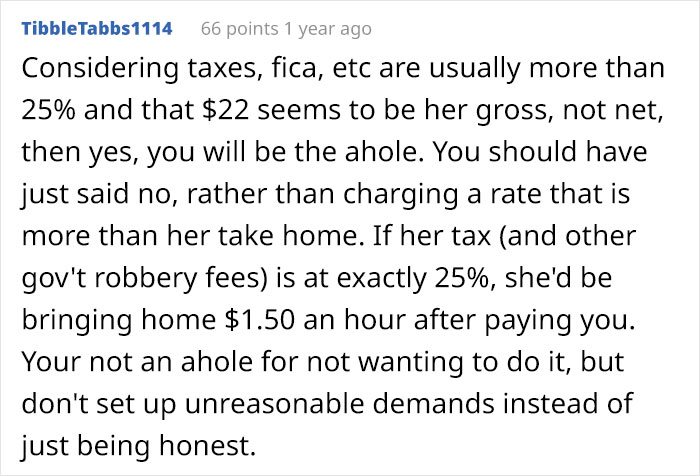 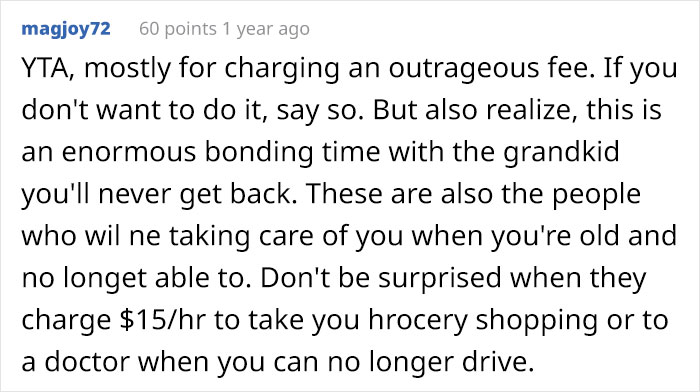 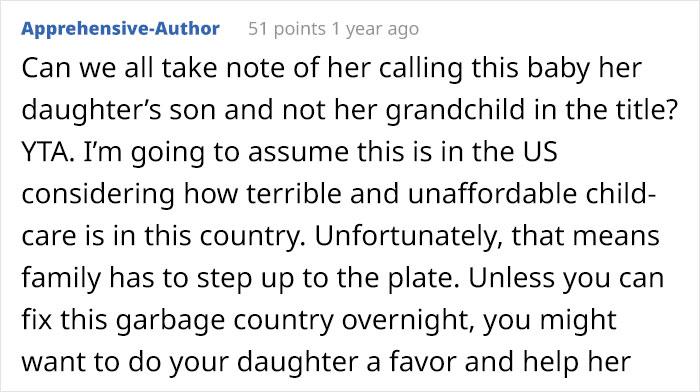 The post Grandma Asks For Two Thirds Of Daughter’s Salary To Babysit Her Grandson, Asks If That’s Wrong first appeared on Bored Panda.