When you’re in your 20s it can feel like you have to experience all that the world has to offer in the next 10 years, because afterwards, life changes too much. Or so they say. The dreaded 30s. The time when all your life’s expectations start doing front-flips and backflips at the same time, turning your brain into a never-stopping washing machine of confusion. Or so they say.

We’ve asked this question quite a few times now – what is the purpose of life? To some it’s the pursuit of happiness, to others it’s the pursuit of servitude to their community. It all leads to the same goal, which is satisfaction with the short amount of time we have to spend on the planet. Or you can spend it on the moon, your choice.

However, stories like this remind us that the joy of exploration doesn’t have to be linear or finite. Our childlike curiosity and craving for adventure and experiences isn’t limited to the first 30 years of our existence. And this 92-year-old grandma and her grandson are the perfect examples of just that, as they aim to visit all 63 US national parks. So how did they come up with such an adventurous idea? Let’s find out!

Brad Ryan, 42, and his 92-year-old grandma, Joy Ryan, decided to go on a trip of a lifetime and visit every single one of the US’ 63 national parks 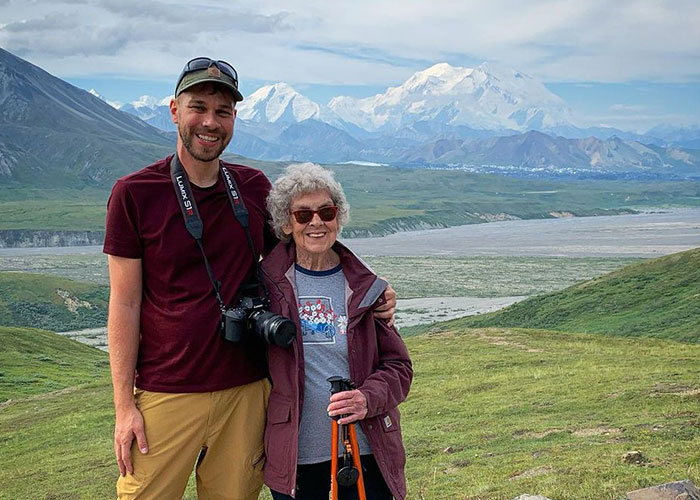 Brad Ryan, 42, and his 92-year-old grandma, Joy Ryan, decided to go on a trip of a lifetime and tick off every single one of the US’ 63 national parks. Ever since October 2015, they’ve been inching closer and closer to their goal, taking along all 60K of their followers curious to see their adventures. The pair have become quite the power duo!

Joy raised a beautiful family with her late husband, Bob, who she married on January 23, 1949. Sadly, he passed away around 20 years ago. Seeing her children grow up, and her grandchildren too, Joy seemed to take more joy from watching them live their own lives rather than experiencing her own to the fullest. She’d never seen the mountains, the ocean, nor the desert – only her little town. 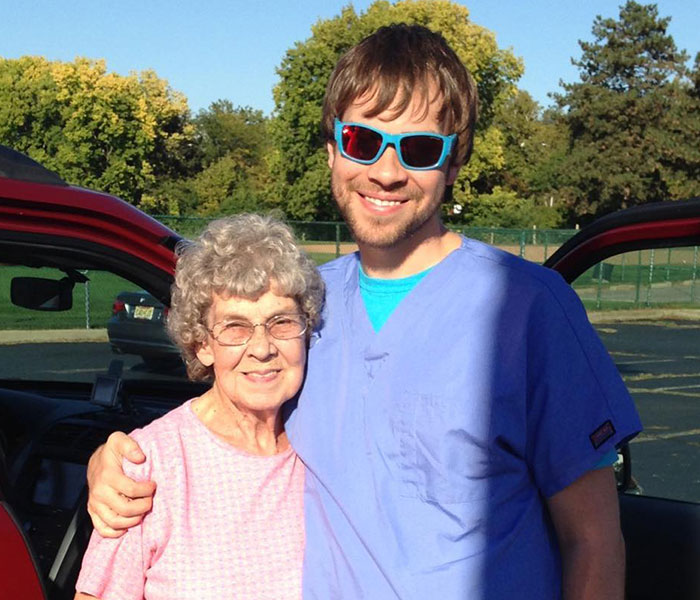 The pair weren’t always as close as they are at present. What inspired him to call her for the first time in a decade was his parents’ unfortunate divorce. He was also in a very dark place in his life following the suicide of a second-year classmate at his veterinary school.

“It was admittedly very awkward in the beginning,” Brad told FOX. “You can’t just pick up after ten years like nothing happened. So instead, you have to make a choice, and my choice was to just create something more beautiful.”

“The idea that she would just continue to sit on that front porch and continue to take that evening walk through a cemetery instead of being surrounded by the most wondrous living things on Earth was what I couldn’t stand,” Brad said. “So that was my cross to bear until the opportunity finally arose that I could get her in the passenger seat and take off.”

Their first trip was to the Great Smoky Mountains National Park, and although Brad worried for his grandma, she exceeded his expectations 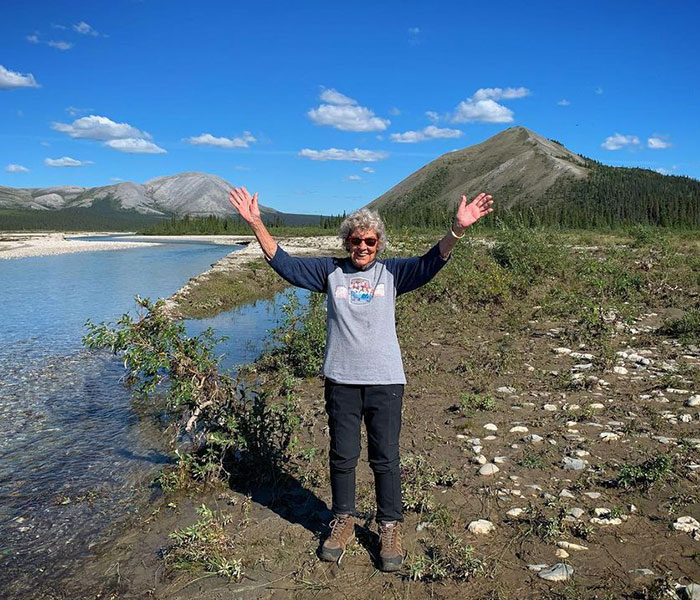 Seven years ago, Brad was considering what to make of a three-day weekend and came up with an idea that unexpectedly started something special. He asked his grandmother to join him on a trip to the Great Smoky Mountains National Park, and she excitedly agreed.

Although Brad wanted to do something sweet for his grandma, he was worried about the logistics and the potential difficulties they’d face due to her age and inexperience. But he was proven wrong. “That was my misperception of what age means and more importantly, what her spirit would allow her to do,” he said.

“That was my misperception of what age means and more importantly, what her spirit would allow her to do,” he said 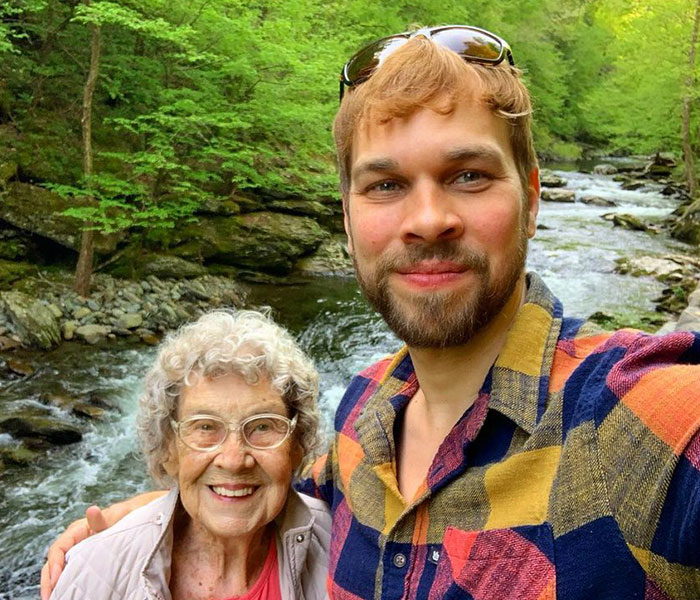 At one point in time, they visited 21 national parks in only 28 days! The only thing that slowed the pair down was the COVID-19 pandemic. Before restrictions hit, they’d been to 29 parks.

“All we could do was hope that things would change and that those opportunities would still be there and then be grateful for everything that we had been able to do and see up until that point,” Brad said. 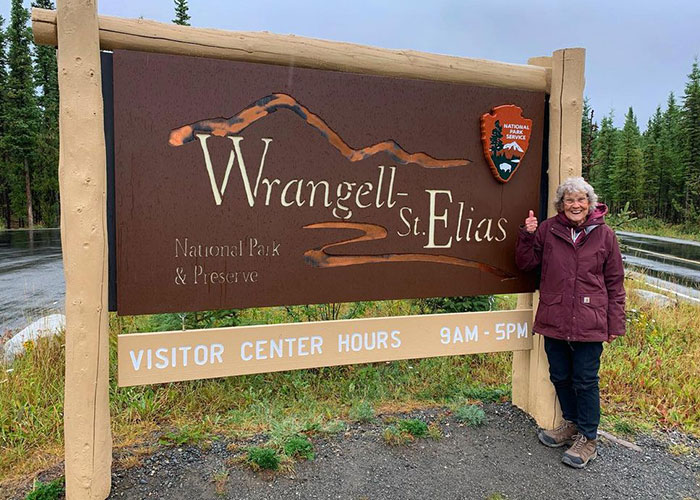 Brad decided to start documenting their adventures on social media, and they have steadily grown a very supportive community.

“We didn’t expect that,” Joy said. “He just put that on social media so the people back home in Duncan Falls knew what we were doing.” Not only did they gain fans, but strangers also started offering their homes as places to stay during their national park visits. 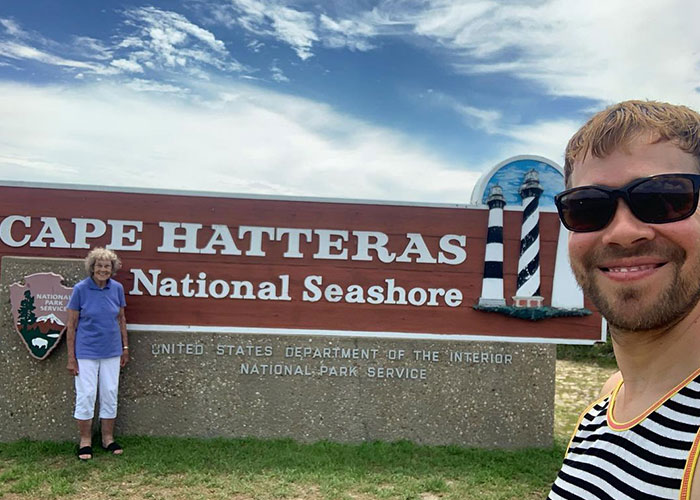 Before this, Joy had not seen much apart from her little town in Ohio. She’d never seen mountains, the desert, nor the ocean, and Brad was determined to change that 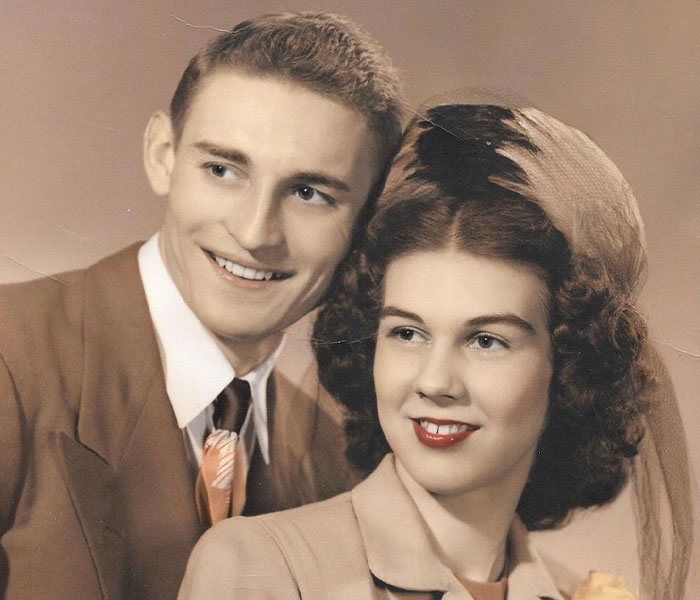 One of their wildest adventures yet took place in July 2021. They went to the eight national parks of Alaska. While there, white water rafting down class 3 rapids, hiking near glaciers and fjords, and seeing a wild animal were checked off Joy’s bucket list. “I always wanted to see the bears get the fish and I finally got to see it. And it was fun, it really was,” she said.

Jenny Anzelmo-Sarles of the National Park Service called the duo “an inspiration to us all.” She continued to say that “national parks are best enjoyed with the people we love, and it is clear to see that Joy and Brad share a special bond, which has been strengthened by their time traveling together.” 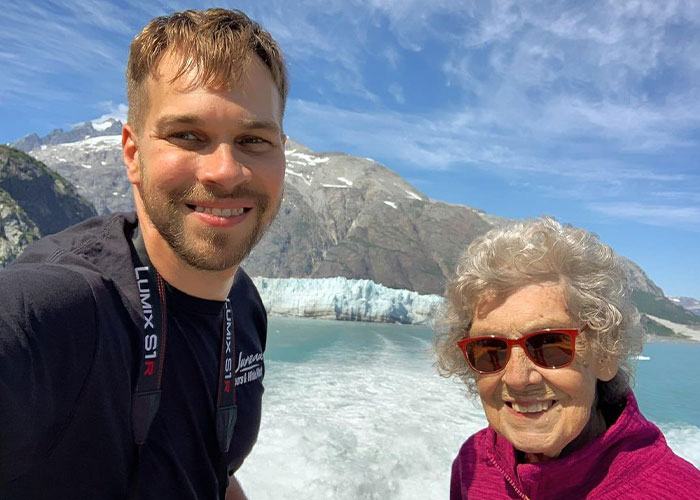 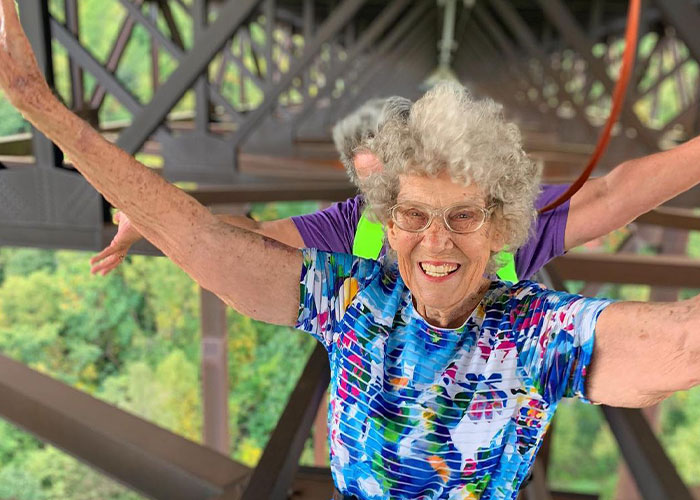 The pair have very nearly crossed every single national park off their to-do list. The one left is the National Park of American Samoa, which is more than 6,700 miles from the pair’s hometown of Duncan Falls.

Brad told Good Morning America (GMA) that finishing their incredible feat will be “bittersweet,” even though they are looking forward to the day they visit their final park. “It’s been a grand adventure, it really has,” Grandma Joy said. “It’s really been a beautiful, beautiful time. And I wouldn’t trade it for anything.” 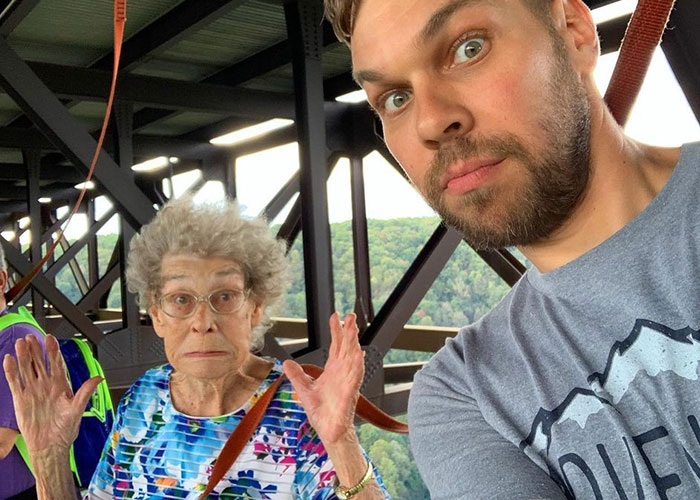 One of their wildest adventures yet was to the eight national parks of Alaska. “I always wanted to see the bears get the fish and I finally got to see it,” Joy said 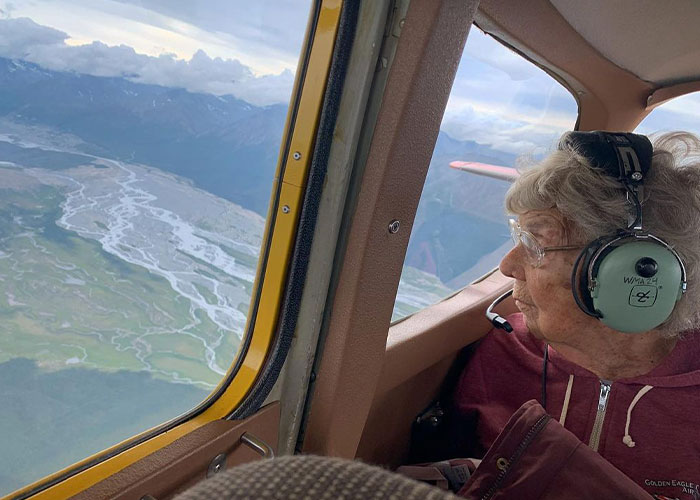 Grandma Joy gave credit to her optimistic outlook on life and the fact that she has “always tried to be positive.” “I’m looking forward to everything,” she said.

“I’ve got something to look forward to. We got one more to go, and I know we’ll make it because my health is that good.” She lives by the principle that you “don’t want to have to regret the next day that you didn’t do it.” 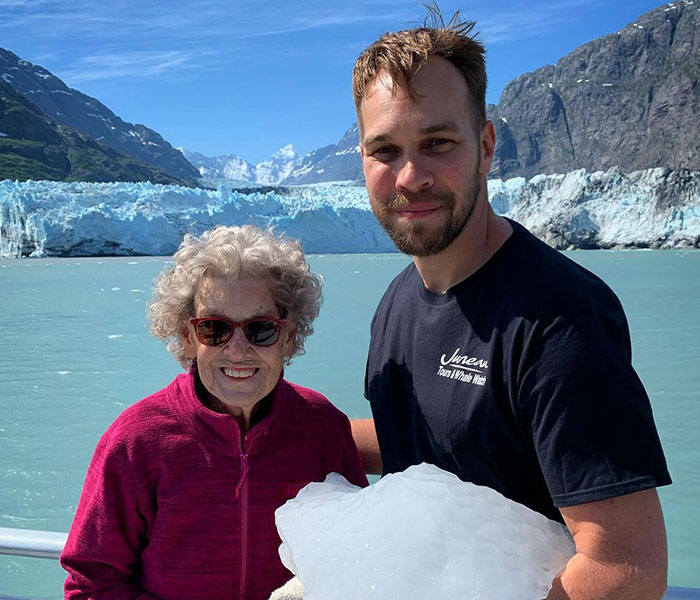 The last one on the list is the National Park of American Samoa, which is more than 6,700 miles from the pair’s hometown, and their trek will be complete 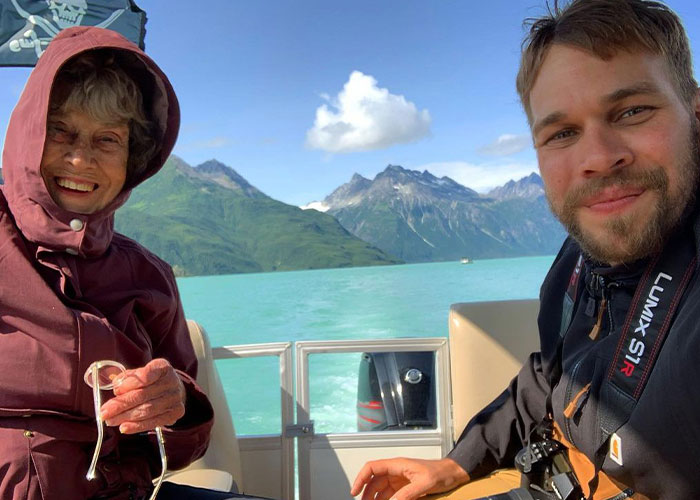 The pair continue to encourage everyone to seek out opportunities to explore. “We realize that not everybody is going to be able to travel to every U.S. National Park,” Brad said. “But there is some adventure to be found in every corner of the country and we hope that people will go out and seek that adventure.” 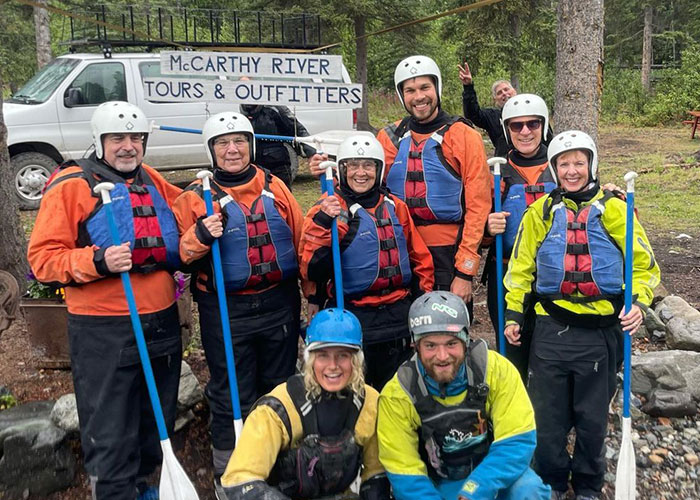 “It’s really been a beautiful, beautiful time. And I wouldn’t trade it for anything,” Joy said. The pair encourage everyone to go on adventures 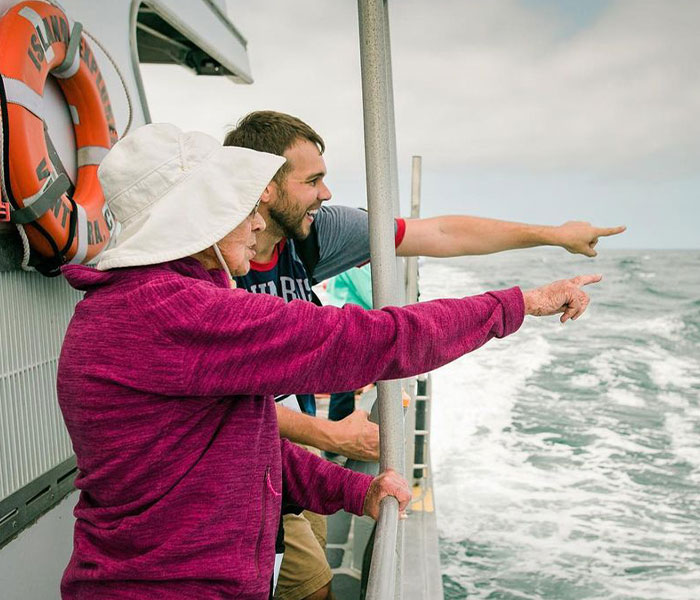 For those curious about visiting the national parks, Randy Olson has crafted an itinerary that would allow travelers to see every single national park in the 48 contiguous states without wasting any time.

This ultimate national park road trip covers 16,847 miles, and it would take you about two months to complete the loop if you’re going “at a breakneck speed.” I’ll leave the link to it here.

We wish Brad and Joy all the best and hope that their milestone trip is one to remember! 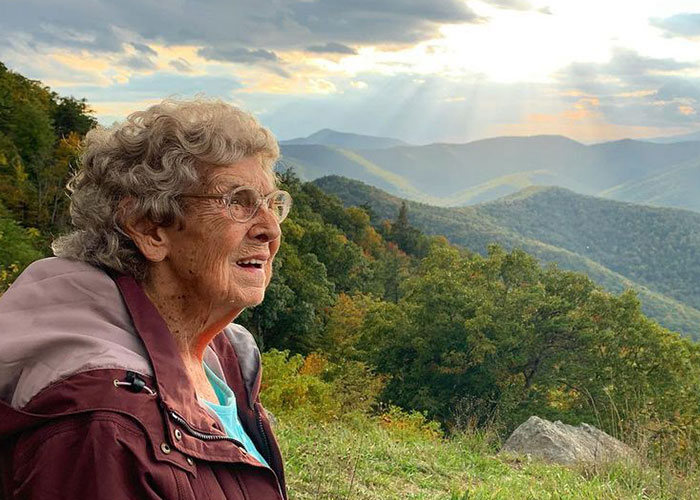 I shall leave you with one question from Brad: “If we’re lucky enough to live to be 85 or 92, how do we want that to look?” Let us know your thoughts in the comments below, and I shall wish you an adventure-filled day!

Don’t forget to upvote and follow the author for more! Toodaloo!

People adore this dynamic duo and it’s easy to see why – their relationship is super wholesome and inspiring. Leave your thoughts in the comments!

The post Grandson Takes Grandma To See The Mountains, It Turns Into An Adventure To Visit Every US National Park Together first appeared on Bored Panda.