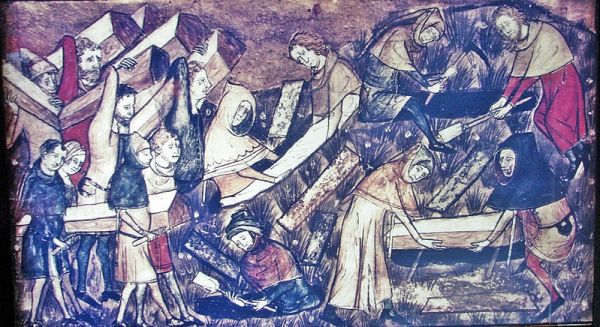 Forensic anthropologist Amelie Alterauge was unfamiliar with corpses being buried face-down until she found such a grave herself in 2014 in Switzerland. Burials in the prone position are exceedingly rare. Since then, she has compiled 100 cases of prone burials over a 900-year period to study them. In the early Middle Ages, some nobles and priests were buried face down to show humility even after death, and their graves show a great deal of respect. But things changed in the 14th century, which was when the plague began to ravage Europe.

As medieval Europeans tried to explain what they were seeing and hearing, they might have seized on ideas about the undead already circulating in Slavic communities of Eastern Europe: “We don’t have [the concept of] vampires in Germany,” Alterauge says, “but there’s this idea of corpses which move around” that is imported into western Europe from Slavic areas to the east not long after the first plague outbreaks take place in the mid-1300s.

Before the 1300s, medieval stories in German-speaking Europe described helpful ghosts returning to warn or help their loved ones. But in an age of epidemics they took on a different shape: revenants, or the walking dead.

“This shift to evil spirits takes place around 1300 or 1400,” says Matthias Toplak, an archaeologist at the University of Tübingen in Germany who was not involved with the study.

Turning to medieval folklore for clues, Alterauge and her co-authors found tales of nachzehrer, loosely translated as corpse devourers: restless, hungry corpses that consumed themselves and their burial shrouds, and drained the life force from their surviving relatives in the process.

Lacking understanding of disease, it only made sense that someone who died of the illness returned to kill family members, because they often developed the same disease. But how would burying someone face down help? Read the theories behind these discoveries at National Geographic. -via Damn Interesting