Relatives are wonderful people who will always come to the rescue in difficult times, who are ready to support, give useful advice or share something of their own at any time. But this is all, of course, only in an ideal world, and in our reality, everything is far from being so beautiful.

Many people, on the contrary, use family ties as a means of manipulation, or just sincerely believe that the status of a relative literally obliges a person to completely disinterestedly rush to help at any moment and share their things – even when they are completely unprepared for this.

Do you want any examples? Then here’s this post on the AITA Reddit community by the user u/aitathrowaway328, which has nearly 18.1K upvotes and over 2K different comments as of today. And yes, the heroine of this story in fact almost fell victim to manipulation by her relatives. 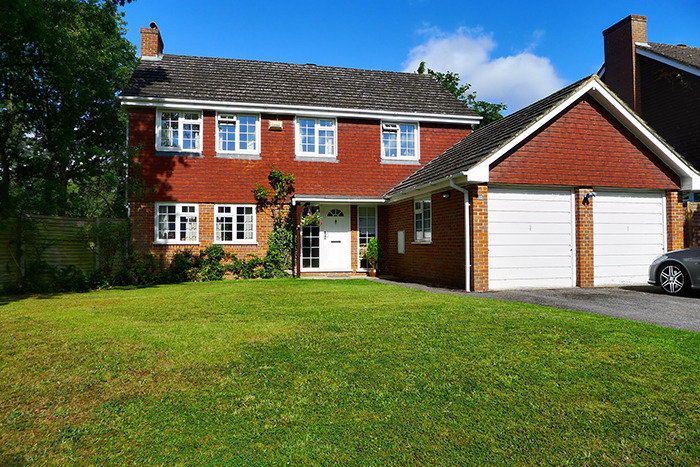 So, the author of the post is 23 years old and she recently lost her father. As the woman admits, it was a heavy blow for her, but none of the siblings supported her in difficult times. Perhaps, the Original Poster supposes, it’s because she had a different dad from them and that drove a wedge between them and her. 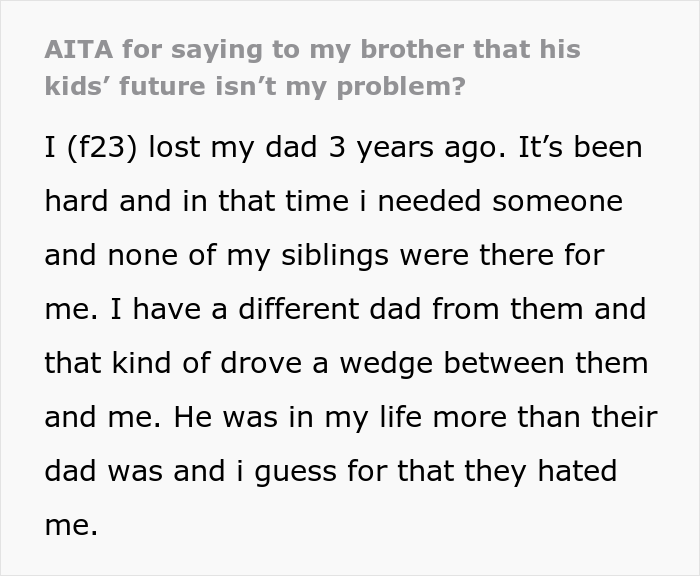 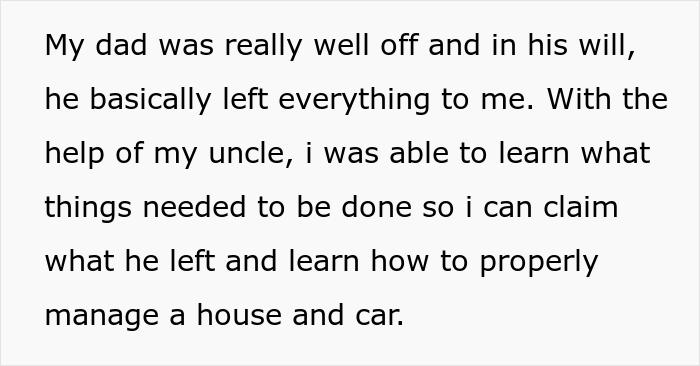 In any case, her father spent a lot of time with his daughter – significantly more than her siblings spent with her their own dad. Probably, her relatives began to envy her – who actually knows? Be that as it may, the OP continues, her dad was a wealthy man, and he left almost all his property to her. 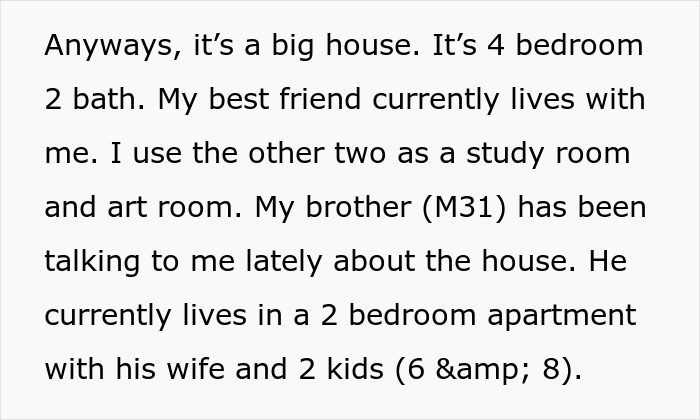 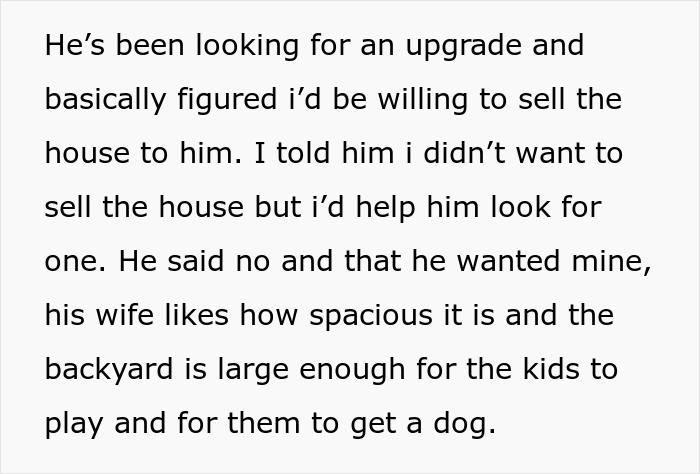 So at the age of 23, our heroine became the owner of a spacious house with 4 bedrooms and 2 baths. Her uncle helped her take over properly, and now the woman lives in this house with her best friend – who, by the way, always supported her in these difficult hours. The remaining two rooms are used by both friends as a study room and an art room. 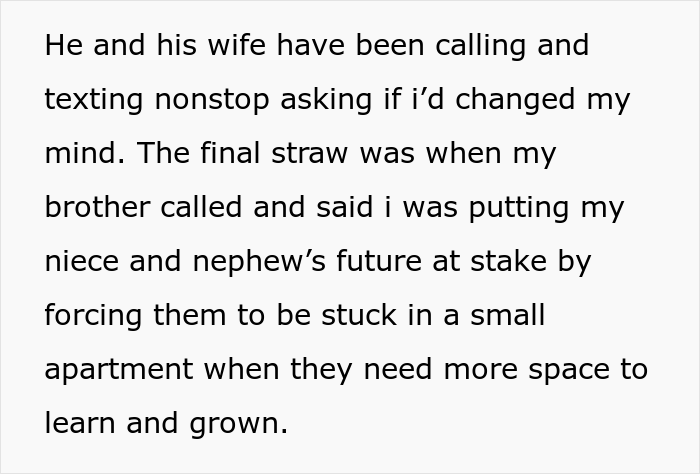 And everything would be just fine if the OP’s half-brother did not literally start pestering her with persistent requests to sell this house to him. The man argued his pretty cheeky demands by the fact that he and his wife and their two children, 6 and 8 years old, live in a 2-bedroom apartment, and his kids would be very comfortable in such a large house, so then they will even be able, as they dreamed, to get a dog. 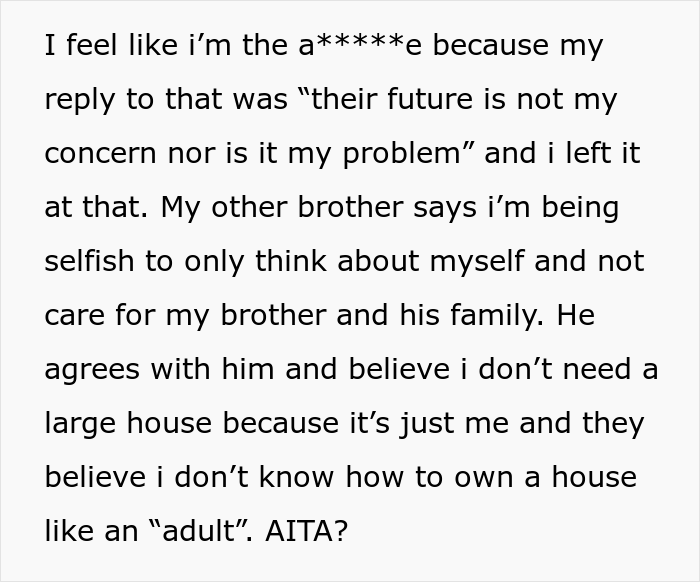 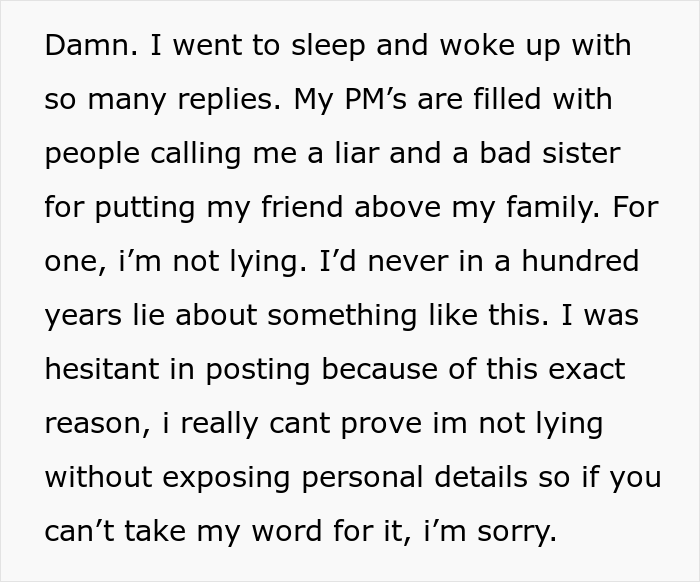 The woman’s half-brother liked her house and literally demanded that she sell it to him, offering a really ridiculous low price

The funniest thing, the OP recalls, is that the hapless buyer offered a price that was simply ridiculous – no more than half of the real value. In general, the main arguments for bargaining were that she, as a decent aunt, should take care of her nephews’ future, and also that she has no family and is too young so allegedly does not really know how to own such a spacious house. 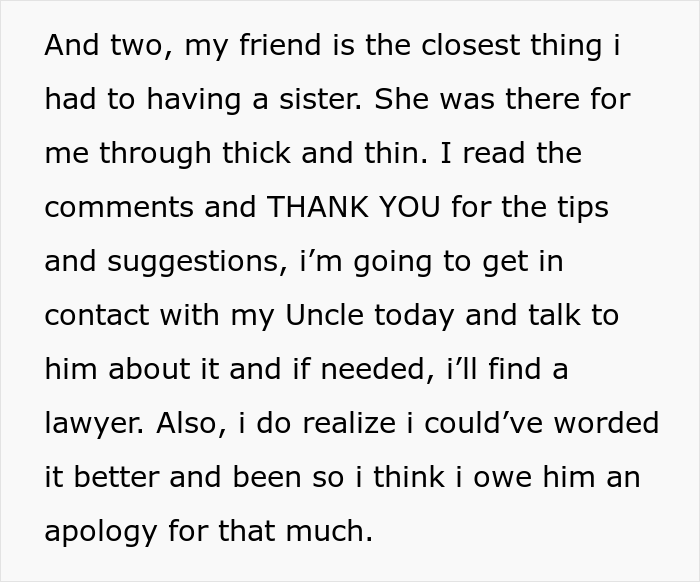 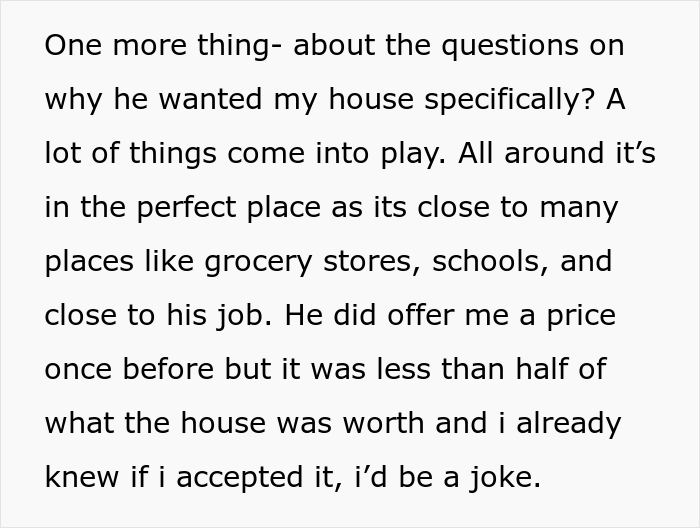 Of course, the woman flatly refused. In response, her brother and his wife began literally bombarding her with messages, asking if she had changed her mind. Another half-brother of our heroine even joined the case, directly accusing her of selfishness. This very selfishness, according to him, was that she stubbornly refused to sell her house at a price well below the market. 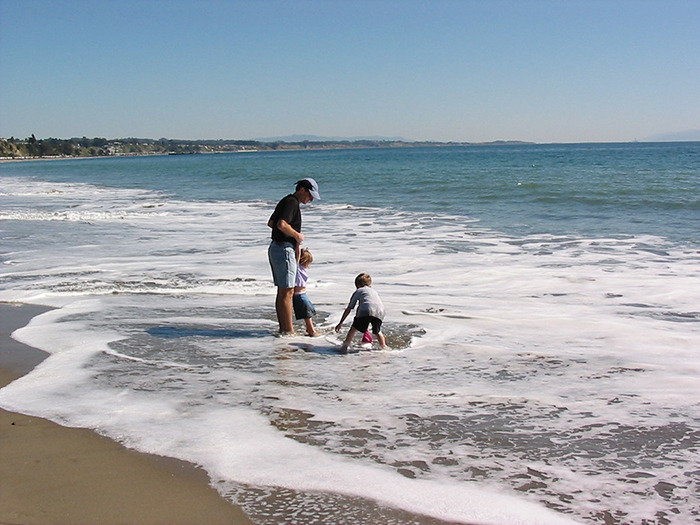 Image credits: Ed and Eddie (not the actual photo)

However, the OP, after consulting with her best friend and her uncle, firmly decided that no one and nothing would force her to part with her new home. And in a conversation with the half-brother, the woman simply stated that the future of his own children is actually his responsibility, not hers. In response, her relatives criticized her heavily, but the OP didn’t care anymore.

However, people in the comments unanimously sided with the woman, supporting her decision not to sell anything

We must say that the vast majority of commenters, of course, sided with the author of this post. According to people in the comments, firstly, her house is her own property, which only she has the right to dispose of, and secondly, if her half-brother could afford to buy this house, then he could afford some other one – since this one is not for sale. 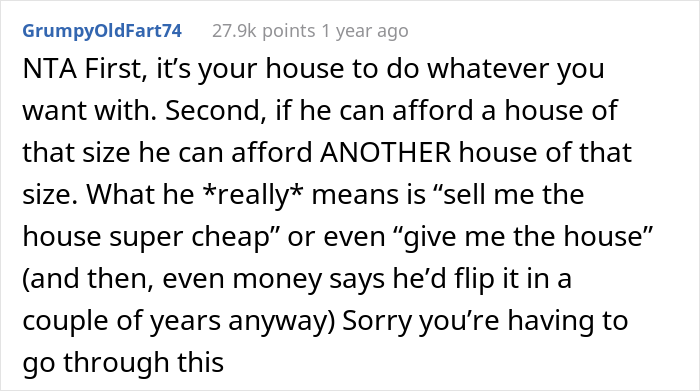 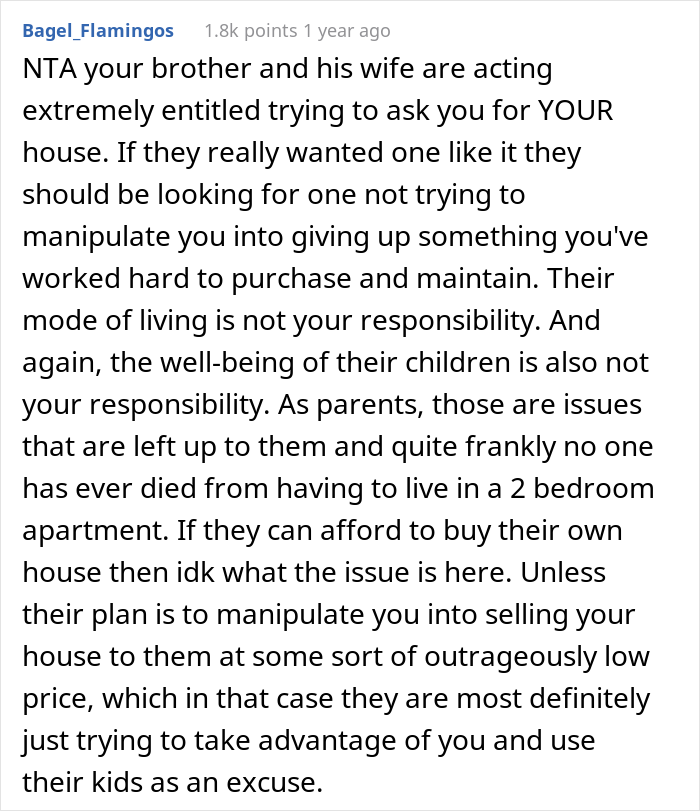 As for our heroine’s relatives, here the opinion of people in the comments is also almost unanimous – yet another example of entitled and selfish people. After all, they de facto require her to “give them her house” simply because they like it. What’s more, the only people in this situation who actually aren’t acting like adults are the Original Poster’s relatives. 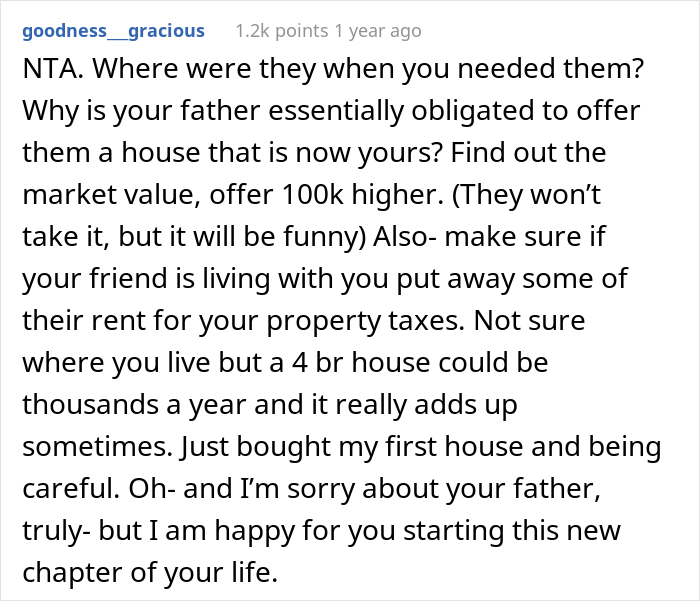 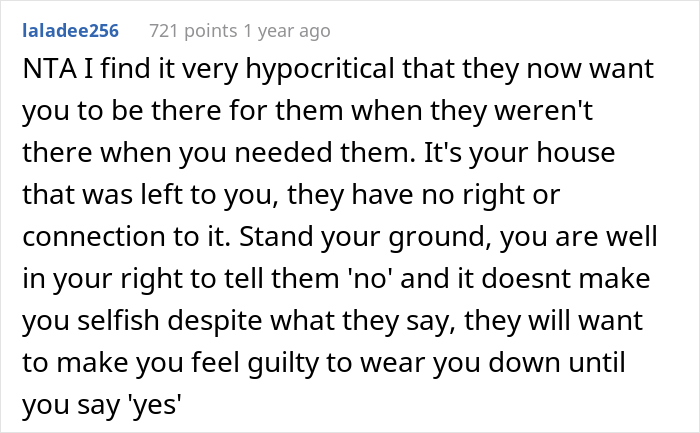 However, as we have said before, relatives generally tend to unceremoniously interfere in others’ lives. As an example, here’s this post of ours about a woman who called her BIL and his wife bad parents simply because she did not like their methods of raising their children. In any case, if you also have any memory of a confrontation with relatives like these, please feel free to tell your own story in the comments.

The post Guy Indignant With His Half-Sister For Refusing To Sell Him The Inherited Spacious House She Lives In, Claiming That He Needs It More first appeared on Bored Panda.