Family is family, no matter how ‘weird’ your situation might look to others. It’s absolutely natural to want to protect those dearest to you. And if anyone dares criticize your loved ones..? Hang on tight because there’s going to be a storm of reckoning coming your way.

Redditor Worried_Usual_3799 shared a dramatic story about how he met his girlfriend’s parents, only to have the night end incredibly badly due to their hateful comments. You see, the redditor grew up in difficult and unusual circumstances: after losing both of his parents, his brother and his partner raised him together.

While most of you Pandas are bound to focus on how this family overcame adversity in the face of tragedy, the redditor’s girlfriend’s homophobic parents instead chose to criticize the fact that it was two men who raised the child. You’ll find the full story, as told by Worried_Usual_3799, below, with all of its dramatic ups and downs. Have a read and let us know if you think the redditor was right to react the way he did or if you think his actions were rude. 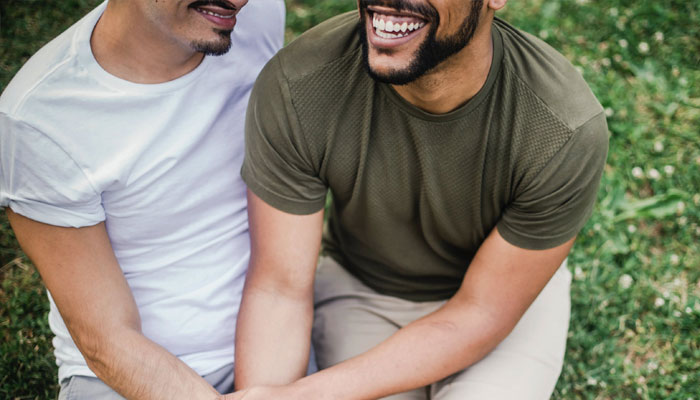 Here is the full story 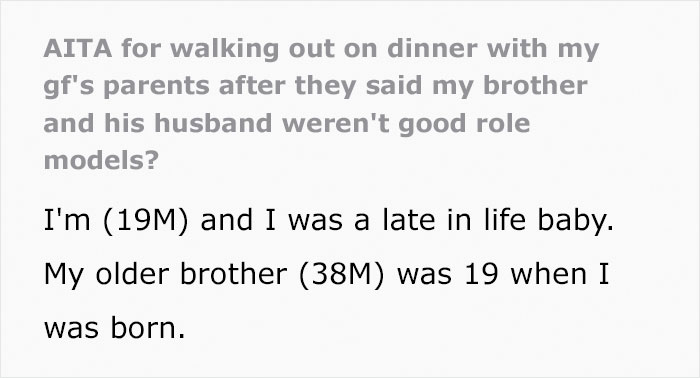 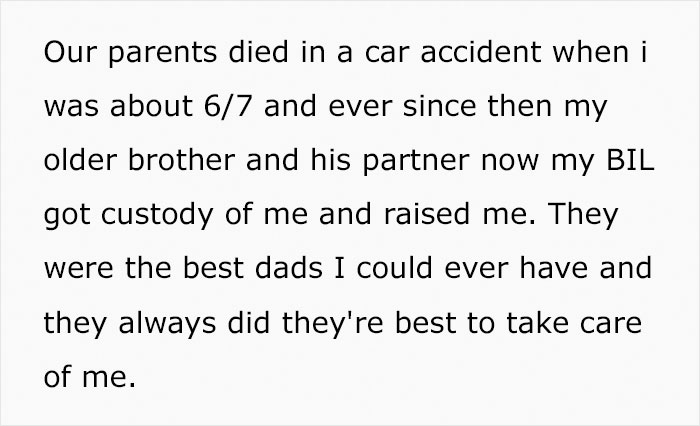 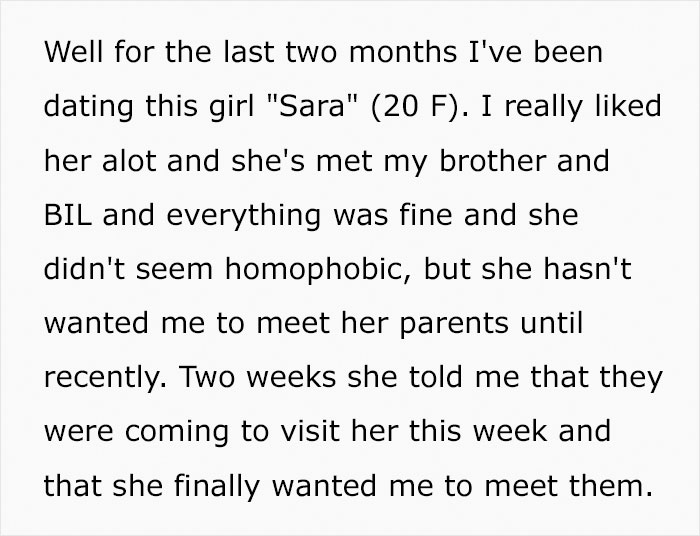 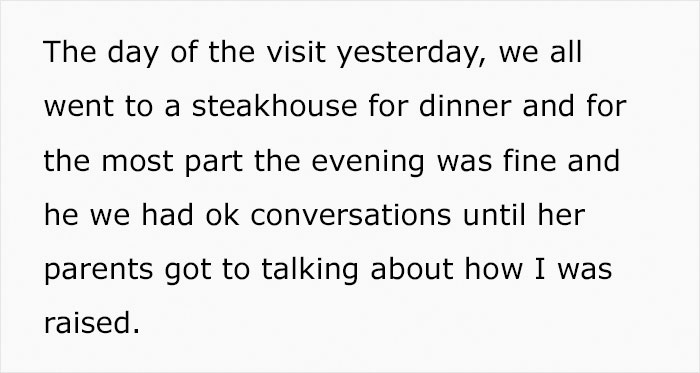 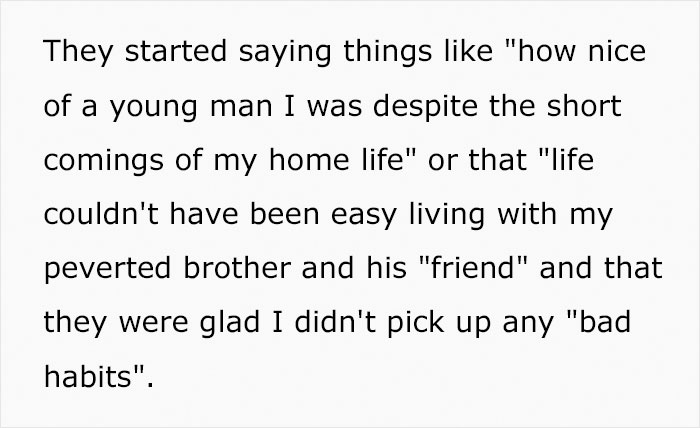 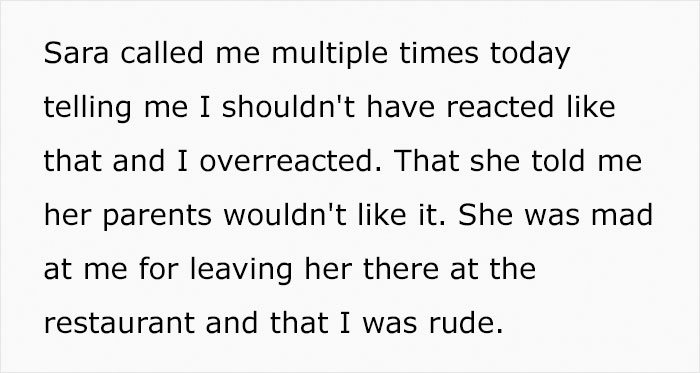 The redditor’s girlfriend’s parents were incredibly judgmental of his brother and his partner, and their comments were practically oozing homophobia. They referred to being gay as “bad habits” and called the young adult’s brother “perverted.”

Naturally, comments like this would make nearly anyone angry. Imagine if you found out that someone’s been saying things like this about the people closest to you, the people who raised you and gave you the best possible childhood.

The vast majority of redditors on the AITA online community said that the author of the post was completely justified in walking out on dinner with his partner’s parents. Some internet users even suggested completely cutting ties with his girlfriend because she kept ‘making excuses’ for her parents.

During a previous interview, I spoke about the roots of homophobia with psychotherapist Silva Neves, from the United Kingdom. He explained that homophobia is learned behavior and usually becomes enrooted in people’s minds due to their upbringing.

“If people grew up with homophobic parents and they haven’t been exposed to different opinions, they are more likely to be homophobic themselves,” the expert told Bored Panda.

“Most religions promote the inaccurate idea that same-sex relationships and sexual behaviors are unnatural, wrong, against their God, and a sin,” Silva explained that people growing up in religious households are more likely to hold homophobic beliefs.

“Even recently, the Pope declared that same-sex marriages were not endorsed by the Church. Islam is also very homophobic. Most Islamic countries have anti-gay laws with punishment ranging from imprisonment to the death penalty. Many people in the UK growing up in such households are more likely to be homophobic,” he said that it isn’t any one particular religion, but many, that promote these views.

“Teenagers can be homophobic as a way to conform to heterosexuality and be more accepted by their peers,” he added.

What’s more, some people turn to homophobia as a way to try to deny and repress their own same-sex attractions. “In being homophobic they attempt to repress their own feelings by fighting against the source of their arousal: the LGBTQ people.”

Reddit users overwhelmingly supported the author of the story. Here’s what they had to say about his reaction during dinner 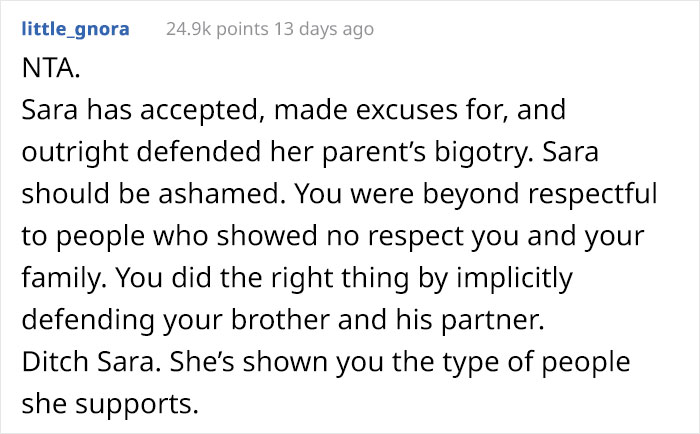 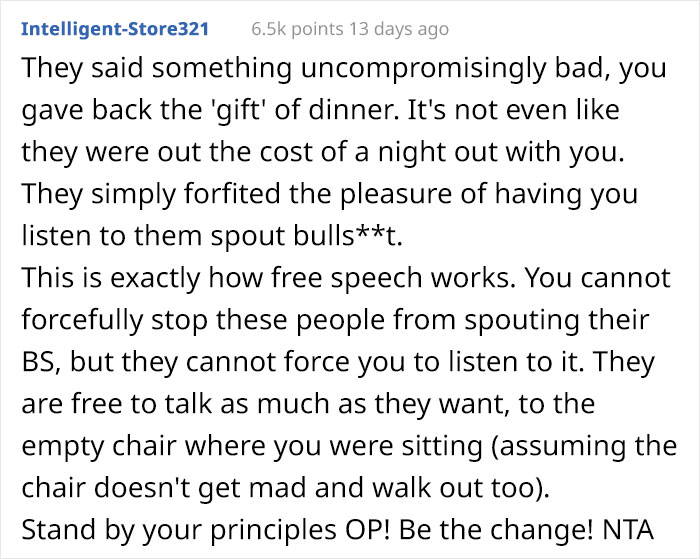 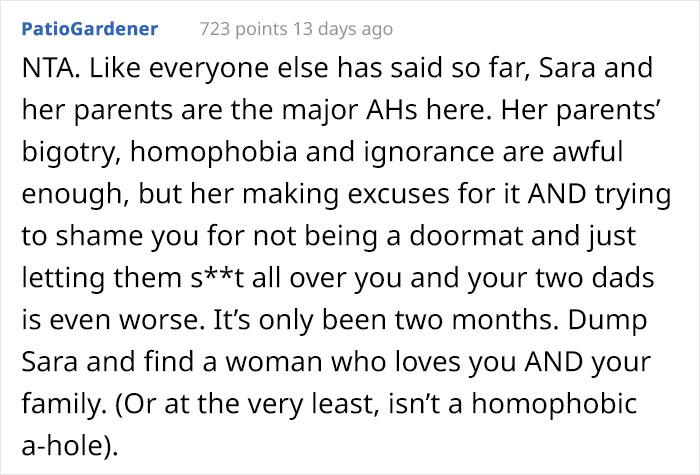 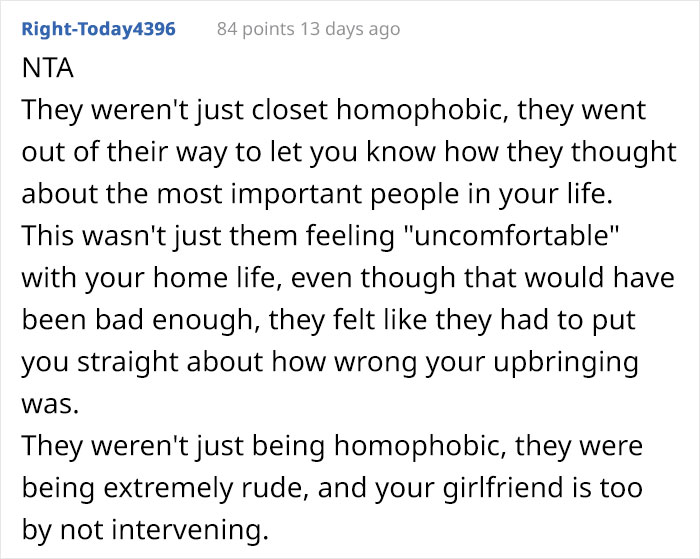 The post Guy Storms Out Of Dinner With GF’s Parents After Their Blatant Homophobia, Wonders If He Acted Rudely first appeared on Bored Panda.