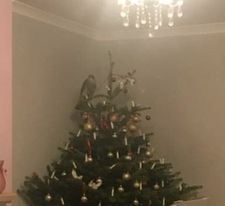 Scotland — The North East Police Division, alongside some folks from North East Wildlife and Animal Rescue Center (or New Arc), responded to a call from a family one afternoon. The family apparently had an unexpected visitor who flew in through an open door in their house. That visitor then perched on a branch of their Christmas tree. The visitor was a sparrowhawk.

New Arc officials said the hawk was examined and determined to not be injured. The bird of prey was released outside.

“The New Arc assisted the Police this afternoon when they apprehended an intruder suspected of stealing X-Mas fairies. After a full body search she was released without charge,” the rescue group said in a Facebook post.

The North East Police Division remarked on their post that this was “definitely a change from a partridge on a pear tree.”

I wonder what made the bird go inside the house. What do you think?