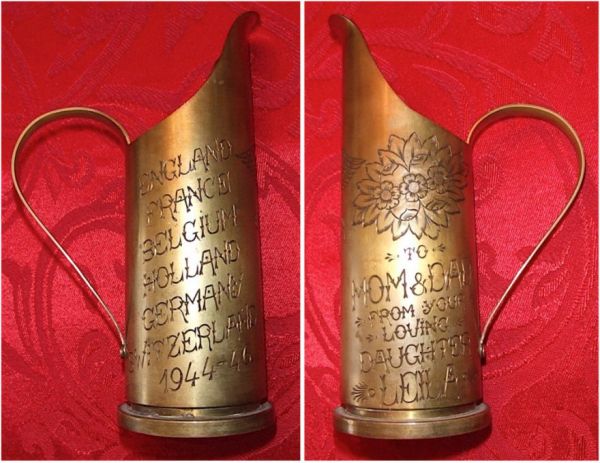 Have you ever wondered why the French word “souvenir” was adopted into English? It came home with soldiers returning from World War I, and often referred to trench art. See, while soldiers in the Great War faced harrowing danger and deprivation, they also did a lot of waiting. Some of them filled their downtime, in which no entertainment was possible, fashioning useful and/or beautiful items from spent artillery shells and other battlefield scrap. You can imagine these items became highly collectible in the years afterward.

From the winter of 1914 to the spring of 1918, millions of Allied and Central Powers soldiers hunkered down within an estimated 35,000 miles of zigzagging trenches, from the Belgian city of Nieuwpoort on the North Sea to “Kilometre Zero” at the Alsatian-Swiss border. When these soldiers weren’t being exposed to mustard gas, sent into suicidal battles in the deadly no-man’s land between the opposing front lines, or struggling with the dysentery, typhoid fever, lice, trench mouth, and trench foot that were endemic to life in the trenches, they made art. Naturally, the vases, ashtrays, and other decorative objects they fashioned from spent brass artillery shells and other detritus of war were dubbed trench art.

It’s an inspiring story—we love it when the human spirit triumphs in the face of adversity—but if you’re picturing doughty doughboys painstakingly tapping out intricate designs on empty artillery shells while bullets whistle overhead, your imagination has gotten the better of you. In fact, only a fraction of the trench art produced during what was then called the Great War and what we now know as World War I was made by soldiers in the trenches, and of that fraction, the first wave of Great War trench art was mostly the handiwork of infantrymen who wore the uniforms of France and Belgium rather than the U.S. of A.

Scott Vezeau, antique dealer and trench art expert, explains the history of trench art and
how it was made. He also gives us the ins and outs of identifying and collecting trench art and “trench art style” items at Collectors Weekly.