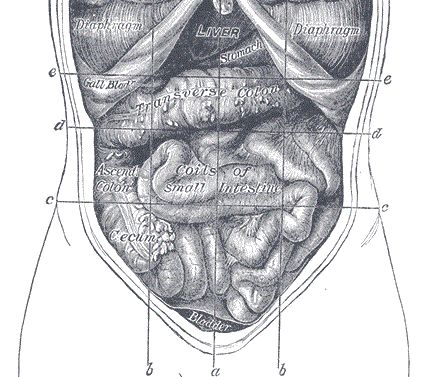 Thomas Morris is working on a book about the history of heart surgery, and keeps a blog of the most curious and hard-to-believe stories in medical literature that he has encountered in his research (motto: Making you grateful for modern medicine). It is not a site for the squeamish, but it doesn’t rely on photographs. A gruesome case from 1874 Virginia may make you cringe, yet it has a happy ending. Dr. A.W. Fontaine wrote of the case,

J.T., a Welsh quarryman, aged about twenty-five years, of sound constitution, but somewhat “addicted to spirits,” whilst in a state of intoxication, fell from a four-horse slate wagon, in rapid motion, and loaded with five or six other persons. The vehicle thus loaded, ran over him and across the middle of his body; it broke the neck off a large glass bottle, the stump of which, it seems, penetrated his abdomen, emptying his bowels, which were crushed into the sand by the rolling wheels.

The good news was that the intestines that spilled out were bruised but not cut, and the puncture wound in his abdomen was small. The bad news was that there was plenty of broken glass and dirt on the entrails that needed to be removed before they were stuffed back in. Surprisingly to everyone involved, the patient survived. Read Dr. Fontaine’s account of the procedure at Thomas Morris. -via Strange Company