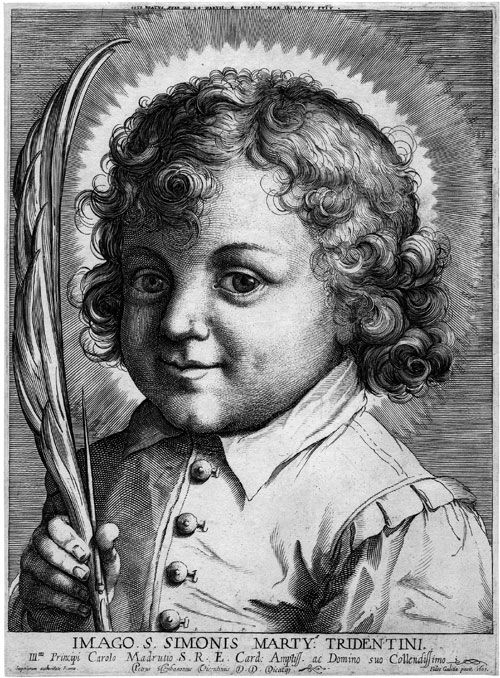 In the year 1475, the city of Trent in what is now northern Italy was ruled by prince-bishop Johannes Hinderbach. He was approached by the father of a two-year-old boy named Simon who had gone missing on the evening of Good Friday.

Searches ensued and by Easter Saturday suspicion had lighted on the small Jewish community in the city. The chief magistrate, Giovanni de Salis, had the households of the three main Jewish families searched, but Simon was not to be found. Then on Easter Sunday Seligman, a cook in the household of Samuel (a moneylender), discovered Simon’s body in a water cellar on Samuel’s extensive property. As all historians agree, the body had clearly been planted there. Samuel could have fled but had, up until this point, enjoyed an amicable relationship with the city’s authorities. So, instead, he “trusted the system” and reported the discovery. He also insisted that all members of the community stay put, including visitors who just happened to be in town for the Jewish Passover. That Samuel came forward and complied with the authorities was never mentioned in the ensuing trials.

That didn’t matter, and eventually all of Trent’s Jewish men were burned at the stake, all the women were imprisoned for years, and locals went on a campaign to make Simon a saint. Even the pope got involved, too late for the Jewish community of Trent, and too late to stop a deceased toddler from becoming a symbol of antisemitism for centuries. Read the story of Simon of Trent at The Daily Beast.