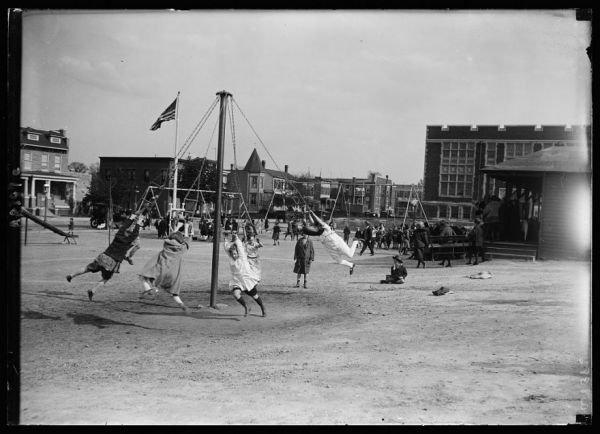 The playground staple known as the giant stride rose in popularity with playgrounds themselves around the turn of the 20th century. It was simply a sturdy pole with a wheel on top, from which hung ropes or chains for children to grab and ride. It was called the giant stride because the centripetal force of the circle allowed a child to take giant strides in their steps.

It was the most thrilling thing that had ever existed on a playground, before or since. In the words of Canadian history writer Anita May Draper, “those who’ve taken a spin on this ride agree it’s the most exciting one of all.” Denver Post columnist Jack Kisling once eulogized the apparatus as “mad fun.” When Iowa’s Quad-City Times canvassed its older readers for memories of the thing in 1991, they received a torrent of positive mail, with one woman even citing it as evidence that growing up during the Great Depression was “more fun.”

But it came at a ghastly cost: cracked skulls, shattered limbs, horrific lacerations and dead or permanently maimed children. In an age of radium toothpaste, lead-paint baby toys and decorating Christmas trees with asbestos, even this pleasure was deemed too dangerous for the world’s children. This is the forgotten story of the giant stride, the most notorious piece of playground equipment in history.

The effort to remove giant strides from playgrounds began in the 1920s, but the structures lingered on for decades here and there. Read about the hazardous giant stride at the National Post. -via Fark