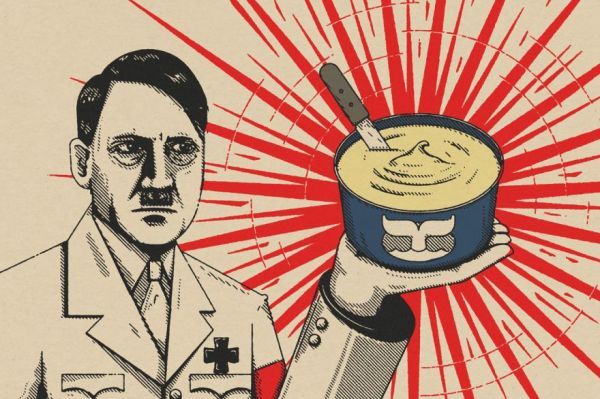 Part of Hitler’s plan for sustaining Germany during his invasion of Europe involved ways to produce enough food without supplies imported from other nations- particularly nations that would be at war with his Nazi regime. One of those supplies was margarine. The butter substitute, at the time made with animal fat, was very popular in Germany, which consumed 17.5 pounds per capita in 1930.

It was also around this time that manufacturers discovered an even cheaper way to produce margarine: with whale fat. The advent of kerosene created a surplus of whale oil, which was previously used as lighting fuel, leading to a massive buy up at low-cost. In 1929, the two companies that would later merge to form Unilever—Margarine Unie, a Dutch company, and Lever Brothers, a British firm—successfully incorporated their vast stores of whale oil into widely popularized margarine products.

Whale fat was also widely used to wage war. Liquified blubber served as a handy machine lubricant and proved useful in manufacturing the nitroglycerine needed for explosives. In fact, Britain declared it a “national defense” commodity in 1938. Crucial to kitchens and battlefields alike, Germany and Britain that year purchased 83% of the world’s whale harvest between them. Many of those whales came from Norwegian whaling, which led the world in whale harvests by hunting along an unclaimed Antarctic coastline, today called Queen Maud Land.

Hitler’s minions launched a plan to stake their own claim to the Antarctic coast in order to ensure a supply of whales. Their first expedition launched in March of 1938. Read how that went at Atlas Obscura.