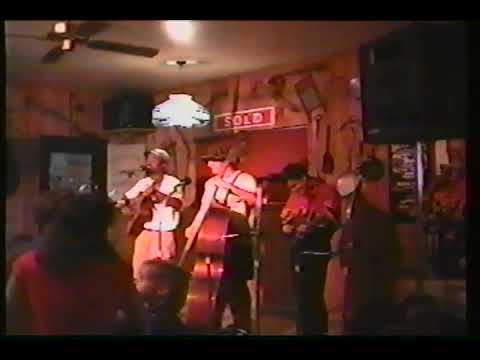 Jonathan Dickerson shared a VHS home movie of his family’s bluegrass band playing at a restaurant in Houston more than a quarter century ago. On one particular night, some strangers from the audience were invited to perform for the crowd. Dickerson told the story when he posted the video to reddit.

This was 1994 or 1995 at a place called Hickory Hollow Bbq in Houston, TX. Tootsie was the lead singer/string bass and throughout the night she noticed a group of guys that seemed to really be into the show. She guessed they were musicians and invited them up, having no idea who they were. Even when Dean Felber (I think?) told her they were Hootie and the Blowfish it meant nothing to her or to anyone there except maybe one or two in the audience.

Fast forward a week or so later. My aunt, uncle, and cousin came home for a visit. We were all sitting around my grandparents’ house when they put this tape in the VCR. I grew up around bluegrass, old country, and folk music. Practically everyone in the family is musical, something us kids took for granted. So when the video started we rolled our eyes and made fun of their flame outfits. Everyone else mostly talked over it when suddenly there’s that unmistakable voice of Darius Rucker (who we all assumed was named Hootie at the time).

This was a time when you couldn’t go anywhere without hearing them and it blew my mind that my uncle and cousin didn’t understand how big this band was. It’s not that we were fans, but we certainly knew them and probably had their songs memorized just from them getting constant airplay. My cousin is the goofy one who backs them up with the mandolin. If I remember correctly, he felt they weren’t getting a good reception at first so he thought he’d help them out. My uncle is the one who loans his guitar to Darius.

That’s about it. I’d nearly forgotten about it but was at my parents this weekend digitizing some of their old home movies and I thought it was interesting enough to share.

Yeah, a brush with fame like that is way more interesting when it’s almost purely accidental. Rucker and Felber were just having supper before performing at another Houston venue. It also says something about the fleetingness of fame that some of the commenters at reddit are too young to know who Hootie & the Blowfish are.   -via reddit