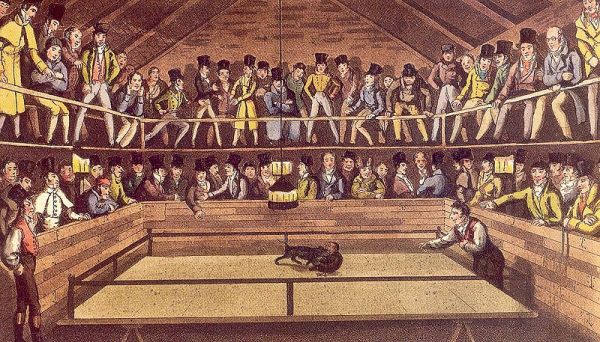 Dog fighting, along with other blood sports, was a lucrative pastime in London in the early 1800s. Those who bet on the outcomes made those who staged the matches quite wealthy, for little to no effort. The animals were the ones who paid the price. But the animal that brought the sport to light was not a dog, but a monkey! Jacco was a violent monkey, believed to be a macaque, who overtook the sport in the 1820s.

Jacco reportedly defeated 14 dogs during his time in the Pit. His technique? Jumping on their backs, thus avoiding the jaws, and going for the throat, “clawing and biting away,” Lennox wrote, “which usually occupied him about one minute and a half, and if his antagonist was not speedily withdrawn, his death was certain. The monkey exhibited a frightful appearance, being deluged with blood — but it was that of his opponent alone …”

In other accounts, Jacco was given a stick to defend himself against the trained canines. It’s this version that was favored by the New Hampshire rock band Scissorfight, which released the song “The Ballad of Jacco Macacco” in 1999. “I think it’s entirely probable if such a thing was available, he would have used it,” Griggs says of the stick story.

Jacco’s backstory varied according to who was doing the telling, but you can read a few versions of the monkey’s adventures, and the influence he had on dog fighting even after his final defeat, at Ozy.

Rating How a Violent Monkey Paved the Way for Animal Rights in the UK is 5.0 / 5 Votes: 5
Please wait...
Loading...
Related articles