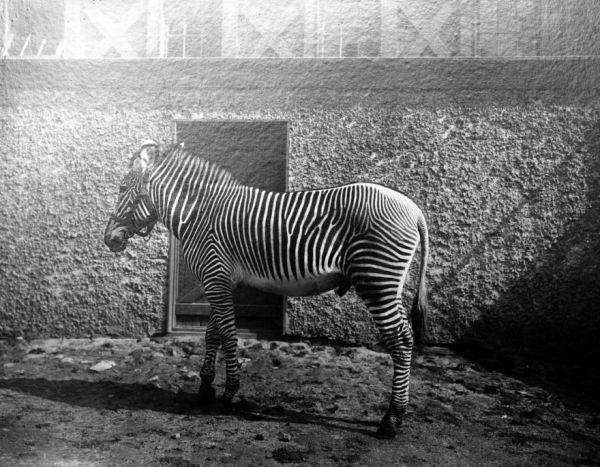 In the late 19th and early 20th century, several countries were busy colonizing as much of Africa as they could. They ran into problems raising familiar livestock on the continent, however. Horses and other beasts of burden were no match for tsetse flies and parasites that carried diseases. But native animals had developed resistance to the natural environmental hazards. What if the hardy zebra were to be domesticated and put to work? It was an intriguing idea, and a zebra named Dan was put to work to test a theory. Dan was a gift from the King of Abyssinia (now a part of Ethiopia) to President Theodore Roosevelt in 1904.

As Western interests in Africa and other challenging climates for livestock transport expanded, these traits raised questions about whether zebras might be domesticated. Arriving in the U.S., Dan quickly became the focus of a government program that sought to domesticate the zebra by cross-breeding the animals with domestic horses and donkeys.

It didn’t go well. Dan was unruly, known for attacking his caretakers, and uncooperative with efforts to cross-breed with other equids. A 1913 summary of the program, published in The American Breeder’s Magazine, describes how Dan refused the mares brought to him. Dan was said to have “a positive aversion” to his horse counterparts, and when one was let loose in his paddock, he “rushed at the mare, and would undoubtedly have killed her had he not been driven back into his stall.” He did, however, ultimately mate successfully with a number of jennies (female donkeys).

But zebras and donkeys are different species, and Dan’s progeny were sterile. The zebra’s wild animal behavior convinced researchers that crossbreeding zebras just wasn’t worth the effort. Yet Dan, who lived until 1919, is still teaching us about the traits of zebras and other equines, including the history of how horses were domesticated, which you can read about at Smithsonian.