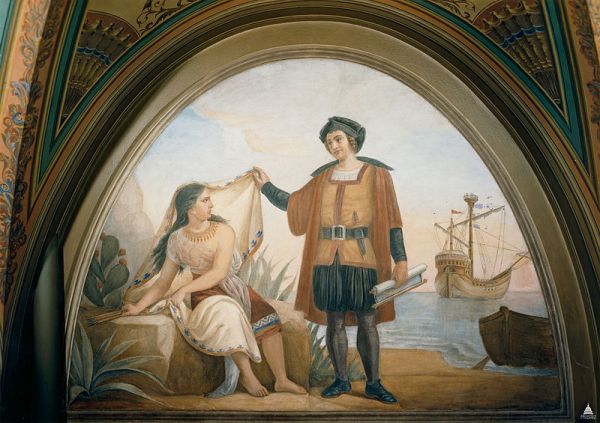 Students of American history learn that European explorers, conquerors, and settlers brought diseases that ravaged the Americas in the 14th and 15th centuries. However, the absolute devastation those pathogens wrought wasn’t fully understood for a long time. The ability of relatively small armies to conquer entire civilizations on their home turf wasn’t due to superior force, strategy, or technology as much as it was due to microscopic invaders -and it wasn’t limited to smallpox, either.

After 12,000 years of separation, Native Americans met Europeans on unequal terms. Almost all the major species of domesticated livestock were from Eurasia, and the livestock that tend to live closest to humans (cow, sheep, goat, pig, and horse) had been living with Europeans for thousands of years. These provided plentiful opportunities for diseases to pass from animal to human and vice versa, and to spread across Eurasia, from eastern China to western Spain. When Christopher Columbus arrived in the Caribbean for the second time, in 1493, he planned to settle. He arrived with 17 ships, 1,500 people, and hundreds of pigs and other animals. As soon as they landed on December 8, the pigs, which had been isolated in the very bottom of the boat, were released.

The next day, the Europeans began to fall ill, Columbus included. Native Americans began to die. This was probably swine flu, to which Native Americans had no prior exposure. Twenty-three years later, in 1516, the Spanish historian Bartolomé de las Casas wrote of the island that is now Haiti and the Dominican Republic: “Hispaniola is depopulated, robbed and destroyed … because in just four months, one-third of the Indians [the Spaniards] had in their care have died.” Two years later in Memorial on Remedies for the Indies, he wrote that “of the 1,000,000 souls there were in Hispaniola, the Christians have left but 8,000 or 9,000, the rest have died.” But worse was to come.

Without the diseases that drastically reduced the population of the Americas, the world’s history and demographic makeup might be quite different today. At the same time, the trade routes between the Old World and the New World suddenly globalized the food we eat. Europeans making their way to the Americas changed everything in a short span of time, bringing together what continental drift took millions of years to separate. Imagine at some distant point in the future, archaeologists (or even paleontologists) who cannot read our written records found evidence of these massive changes taking place suddenly in the physical record. Read about those changes and what they meant at The Atlantic.

(Image credit: Architect of the Capitol)