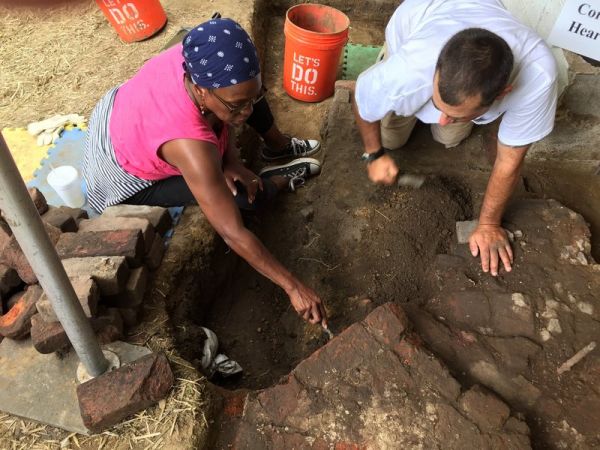 Archaeologists were excavating a site at Belvoir, the historic home of Francis Scott Key’s grandmother, in Crownsville, Maryland. They were looking for the Revolutionary War encampment of French commander Rochambeau, but what they found turned out to be much more important in its implications for future research. They found the brick floor of the site’s slave quarters.

A team from the Maryland Department of Transportation, State Highway Administration, began excavating the 32-by-32-foot building in 2014. Julie Schablitsky, chief archaeologist with the department, noticed a pipe stem sticking out of the brick floor and subsequently dated other artifacts in the soil layer to determine its age, somewhere between 150 and 200 years old. But a more thrilling detail emerged upon further analysis. Schablitsky and her team tested the tobacco pipe stem for human DNA, and found direct evidence that it belonged to a woman. Not only that, the DNA most closely matched that of the Mende people of Sierra Leone.

Enslaved people were brought over by the shipload from Africa between 200 and 400 years ago. They, and their descendants, were denied written records of their origins and ancestry for the most part. Since clay pipes easily retain DNA from saliva, this discovery opens up a new channel to establish genealogical records based on DNA that could fill in the gaps for those who want those records. Read about the find at Atlas Obscura.