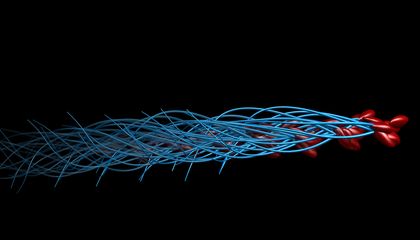 An unusual question to ask, right? But if you’re curious about it, worry not- researchers from the University of Bristol in England and the Universidad Nacional Autonoma de Mexico have discovered the answer! Using 3-D microscopy and advanced mathematical analyses, the team found that the human sperm tails’ snakelike movement is an optical illusion. Human sperm only turns in one direction, as The Smithsonian details:

Rather than moving side-to-side, sperm tails actually turn in only one direction. Without other adjustments, a one-sided stroke would result in sperm swimming in circles and never reaching their destination, the female egg. To compensate, the scientists found, the body or head of the sperm rotates independently in a corkscrew-like motion in the opposite direction, enabling the whole cell to move forward in a straight line.

“We were not expecting to find what we found,” says Hermes Gadêlha, head of the Polymaths Lab at University of Bristol and lead author on the study. “The aim of the project was ‘blue sky’ [or broad] research, to understand how sperm moves in three dimensions. And the result has completely changed the belief system that we have.”

image via The Smithsonian