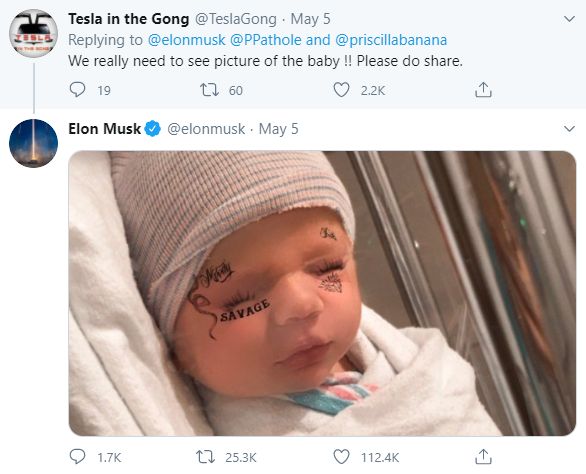 When this reporter asked Elon Musk how his son is doing, Elon was confused as to what or who the reporter was talking about.

“Sorry?” Elon replied, not recognizing what the off-cam reporter was talking about. The reporter then repeated his question.

“Oh, you mean my kid!” replied Elon with a laugh. “That sounds like a password,” he remarked.

Musk and the reporter both laughed it off, thankfully making it much less awkward than it had the potential to be.

He added: “He’s great! I think next time I am going to bring him, maybe come back in a few months and bring him along.”

But how does one properly pronounce X Æ A-12?

When Joe Rogan asked Musk how to pronounce the baby’s name on his podcast back in May, he tried to clear things up a bit.

That, or you could just call the baby by his nickname — Little X.

Yep, that makes sense. Sounds like a rapper, or maybe a wrestler.

Well, I guess I’ll just stick with the nickname. What about you?

Rating How Do You Pronounce The Name of Elon Musk’s Baby? is 5.0 / 5 Votes: 4
Please wait...
Loading...
Related articles

Behind the Façade of Potemkin Villages