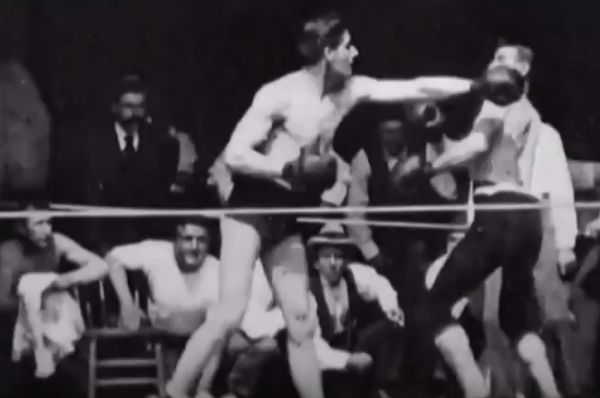 Quick, when did movies start to make money? You’ve probably never thought about it, but the earliest experimental films were hard to monetize. They were an amazing technology at the time, but you could get the same entertainment from a live stage show, with color and sound. The breakthrough came with an 1894 Edison kinetograph film of  boxing match between James “Gentleman Jim” Corbett, and New Jersey champion Peter Courtney. The only people that actually saw the fight live were the film crew and a few staged audience members for ambience. Everyone else had to pay to see how it turned out.

Regular fight fans had to adapt to a new way of catching all the action from the 1894 bout. They lined up with hard-earned nickels and waited for their turn to watch the bout through the Kinetoscope, another Dickson invention, which had a peephole window on top for viewing the flickering films made with the kinetograph.

The playback of the boxing match made money — the first film to do so, according to the 1968 boxing documentary The Legendary Champions. That means it was also the first financially successful boxing pay-per-view. Better yet, it helped launch the career of the sport’s first movie star, Corbett, the fighter who had defeated the legendary John L. Sullivan to win the world title. “He was a celebrity — a pop culture figure in the very early days of mass media,” says Jeremy Geltzer, who has written several books on early film history.

Suddenly, more people could see a particular fight than could fit into an arena, and boxing continued to make so much money that Floyd Mayweather is the world’s highest-paid athlete today. Read how the first boxing film came about and where it led at Ozy.