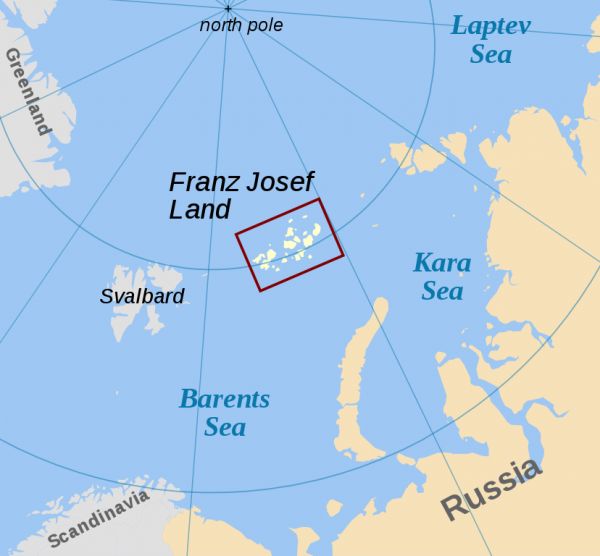 Franz Josef Land is a cluster of 192 islands in the Arctic Ocean. Despite the name, it was never a part of the Austro-Hungarian Empire. The first sighting of Franz Josef Land is thought to have been in 1865 when Norwegian sealers found the archipelago, but they kept that discovery to themselves to keep competition from other seal hunters away. That wasn’t the case when a 24-man Austro-Hungarian crew set out on a science and exploration expedition on the ship the Tegetthoff. They were looking for a route to the North Pole.

The Tegetthoff left Norway in July of 1872. Before the end of August, the ship was encased in sea ice. The ice didn’t break up the next summer. Nor the next. But it drifted, and carried the Tegetthoff into unknown waters. The ice carrying the ship reached a land mass in August of 1873, and scientists from the Tegetthoff duly trudged over to see and document it. They named the land mass after the Austro-Hungarian Emperor, who was most notable for later sparking World War I when he was assasinated. But the crew was no closer to navigable sea or rescue. In May of 1874, after nearly two years on the ice, the crew decided to walk out, dragging their lifeboats to open water. That journey took an additional three months. Read about the Austro-Hungarian North Pole expedition and what they found instead at the Dawlish Chronicles. -via Strange Company