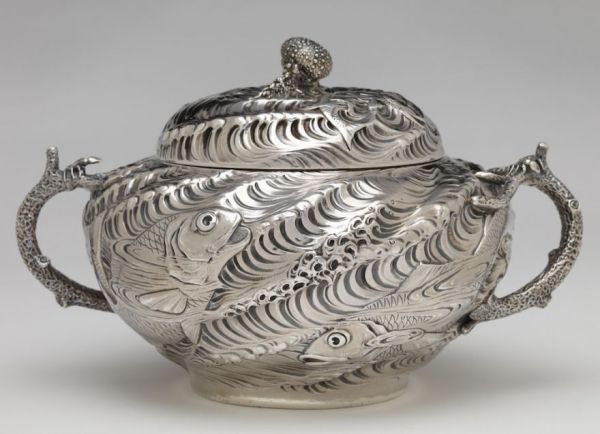 In the mid-19th century, American silver companies were doing pretty well, thanks to the tariff of 1842. It drove imports down, but expanded the supply of silver (and gold) because of the coins used to pay the import tax. Reed & Barton did well, and so did Tiffany & Co., but the real winner of the silver business was the Gorham Manufacturing Company of Providence, Rhode Island. Gotham silver became legendary, not only because of the tariff that provided the materials at a lowered price, but also because of modern machinery, lavish design, and advertising that used the new tool of photography.

Because Gorham did much of the literal gilding during the Gilded Age that followed the end of the Civil War, the RISD exhibition and Rizzoli book devote a good deal of space to the insane variety of silver pieces Gorham offered customers in the second half of the 19th century. At one point, Gorham included as many as 1,000 different pieces of sterling and silverplate in its catalog, from humble crumb scrapers to elaborate epergnes.

The show and book also pay particular attention to a service commissioned by Henry and Elvira Furber, who made their fortune in the insurance industry. The commission, executed between 1866 and 1880, would eventually consist of 816 pieces—this service for 24 actually included 24 asparagus tongs—for which 20 oak cases were custom built by Gorham. Nor is the Furber commission even the most excessive example of Gorham’s output. For example, according to data culled from Gorham’s costing ledgers from the late 1880s, a single tea service might require more than 700 hours of elaborate chasing. That translates to three months worth of 60-hour weeks by a single worker, all to make the act of drinking a cup of tea more pleasant.

Read the story of Gorham silver and the wealthy people who bought it at Collectors Weekly.