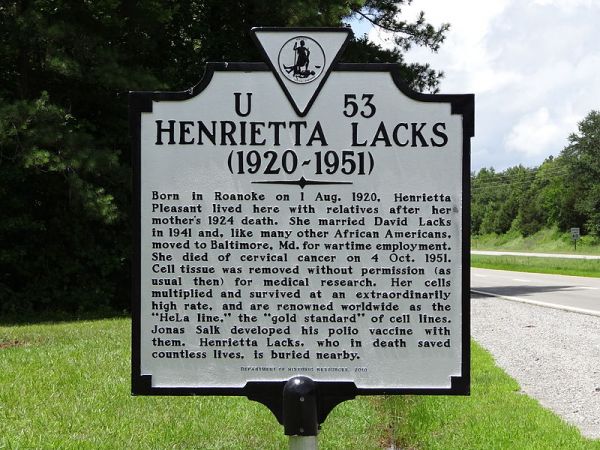 In 1951, Henrietta Lacks went to Johns Hopkins Hospital in Baltimore, despite her misgivings, because the pain was so bad. She was suffering from cervical cancer, which would take her life eight months later. Lacks was wary of the doctors there, because rumor had it that they conducted experiments on Black people against their will and without their knowledge. The first order of business was a biopsy.

The tissue taken from her cervix 10 days later was given to Dr. George Gey, director of tissue culture research at Hopkins [PDF]. He believed that if he could find a continually dividing line of malignant human cells, all originating from the same sample, he could find the cause of cancer—and its cure. His assistant placed tiny squares of the specimen into test tubes, then labeled each tube with the first two letters of the unwitting donor’s first and last names: HeLa.

Soon, Henrietta’s cells began to divide. And, unlike the other cells they had sampled, they did not die. Gey started giving the immortal cells to colleagues, saying they had come from a woman named Helen Lane.

Within two years, HeLa cells had been put into mass production, commercialized, and distributed worldwide, becoming central to the development of vaccines and many medical advances. By 2017, HeLa cells had been studied in 142 countries and had made possible research that led to two Nobel Prizes, 17,000 patents, and 110,000 scientific papers, thereby establishing Henrietta’s role as the mother of modern medicine.

Henrietta lacks left five children behind, who did not learn about her immortal cells for 22 years, and to this day have not received any of the billions of dollars they have generated. Read about Henrietta Lacks, born 100 years ago, and her cells that still live on 69 years after her death at Mental Floss.