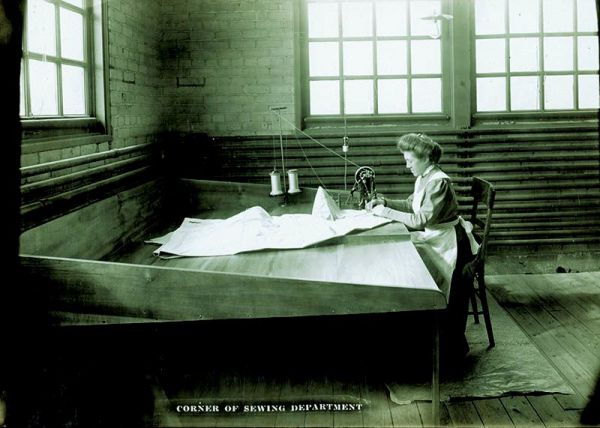 Ida Holdgreve answered an ad in a Dayton, Ohio, newspaper that said “plain sewing wanted.” But it was a typo that should have said “plane” sewing. That’s how the dressmaker ended up sewing airplane parts for the Wright Brothers.

In 1910 and 1911, two odd buildings began to rise a mile-and-a-half west of the Wright brothers’ West Dayton home. Bowed parapets bookended the long one-story structures, their midsections arching like the crooks of serpents’ spines; wide windows reflected the pastoral world outside. This was the Wright Company factory, the first American airplane factory, and behind the buildings’ painted brick walls, Holdgreve sewed surfaces for some of the world’s first airplanes, making her a pioneer in the aviation industry.

“As far as I know, she was the only woman who worked on the Wright Company factory floor,” says aviation writer Timothy R. Gaffney, author of The Dayton Flight Factory: The Wright Brothers & The Birth of Aviation. “And she was earning her living making airplane parts. Since I haven’t found a woman working in this capacity any earlier, as far as I know, Ida Holdgreve was the first female American aerospace worker.”

Holdgreve learned to build airplanes, stretching countless yards of muslin over their frames. As the industry grew, her expertise was recognized, and in World War I, Holgreve supervised a crew of seamstresses turning out more advanced airplanes for the war effort. Yet strangely, she never flew in an airplane herself until 1969! Read the story of Ida Holgreve at Smithsonian.