The open letter that initiated one of the greatest controversies in modern art history was simple and spare. It contained fewer than 150 words, not counting the names of its signatories, and its writers were 18 painters—some of whom came to be known as the defining artists of the postwar Abstract Expressionist movement—along with 10 sculptors who empathized with their views.

The subject was an exhibition at the Metropolitan Museum of Art that sought to survey painting in the United States as it existed during the. year 1950. Today, that era of American art history has come to conjure all-over abstraction—paint spatters, color fields, gestural strokes. Then, however, the emphasis of the exhibition was on figurative styles (in particular regionalism and social realism) that privileged the everyday, the mundane, and the political—all of which the Abstract Expressionists staunchly opposed.

Claiming a bias among the jury chosen to oversee the show, the objecting artists declined to submit work for consideration, alleging that their “advanced art” would not be given its due. “We draw to the attention of [the Met’s leaders] the historical fact that, for roughly a hundred years, only advanced art made any consequential contribution to civilization,” the letter read.

The Met’s leadership never responded to the missive, but that letter went on to change art history, initiating an iconic photoshoot in Life magazine and a sea change in the way museums dealt with contemporary art. Now, it has also initiated a new book, The Irascibles: Painters Against the Museum, New York, 1950, which was to have coincided with an exhibition of the same title at the Fundación Juan March in Madrid. (The museum is currently closed because of coronavirus-related restrictions.)

Contemporary tastes have trended away from the values proffered by the Abstract Expressionists, and it might feel as if we don’t need another show and book devoted to the New York contingent of the group, whose white male leaders—including Barnett Newman, Mark Rothko, Clyfford Still, Willem de Kooning, Robert Motherwell, and Jackson Pollock, all of whom signed the letter—have tended to hog the spotlight at the expense of others associated with the movement. Yet this tome, edited with intelligence by Bradford R. Collins, Manuel Fontán del Junco, Inés Vallejo, and Beatriz Cordero, provides a framework for how members of the art world can call on institutions to change what they show and how they present it. In that, it offers valuable lessons for artists—and art workers too—standing up to museums today.

All of the historians involved in the book seem to agree that the letter’s writers succeeded primarily by using shock tactics to grab headlines. Collins, in his essay on the letter’s historical grounding, quotes Tyrion Lannister in the TV series Game of Thrones: “There’s nothing more powerful in the world than a good story.” Indeed, the so-called Irascibles’ cause was a zesty narrative. As Collins points out, the artists involved considered themselves “noble artists suffering at the hands of bourgeois philistines” in ways not entirely similar from 19th-century French radicals.

The New York School, as the Manhattanite strain of Abstract Expressionism became known, felt betrayed. They felt that mainstream publications such as Life—the magazine that would ultimately run Nina Leen’s iconic photo of the artists with an article that called them the “Irascible Group”—were disinterested in their work (though Collins insists that wasn’t quite right) and that New York museums weren’t putting their weight behind Abstract Expressionism (that wasn’t true, either—the Museum of Modern Art had been showing it). The painter Adolph Gottlieb once compared the situation to the censorship of modernist composers Dmitri Shostakovich and Sergei Prokofiev in Russia, saying, “The names may vary, but the methods, the motives, and the objects of attack are essentially the same.” 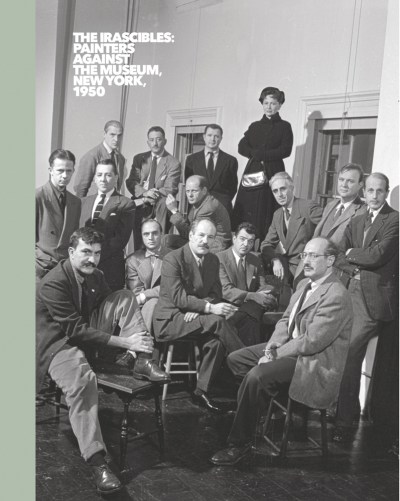 The juried exhibition that was announced by Met director Francis Henry Taylor at the start of 1950 seemed emblematic of all of this. Gottlieb began convening the artists several months later and together they determined that an open letter and attention in the press would be the most valuable form of protest. “Newman, who had run for mayor of New York City in 1933, not only knew how to deal with the press but also when,” Collins writes. Newman visited the New York Times offices on a Monday toward the end of May—a slow news day—and hand delivered the letter to the city editor. The gesture worked: a full article resulted from it.

Reaction was split on how the letter ought to be treated. The New York Herald Tribune ran an op-ed in favor of the Met, calling the artists’ accusations “misguided,” while the Nation lathered on hatred for the museum, saying it was guilty of “philistinism.” (The Met sat this debate out and never issued a statement.)

Even the signees themselves were somewhat divided. Gottlieb once said that that there was “no sense of solidarity” among the painters. Hedda Sterne was the only woman who signed, and Vallejo and Manuel Fontán del Junco report that she considered being remembered as the sole female painter involved to be the worst thing that ever happened to her professionally. (All of the artists who signed were white. It’s worth remembering who the New York School considered to be “advanced,” and that the painter Norman Lewis, who had close connections to Motherwell and Ad Reinhardt, once said that he never fell in with the Abstract Expressionism because “it did not favor all artists equally.”)

In fact, the signatories could barely even agree on whether to participate when Life magazine asked them to sit for a photoshoot in an article about the controversy. That may account for the steeliness on display when Leen brought them into her studio for a picture. “They were never in a good mood,” Leen said. She knew they would be difficult, and she posed them so quickly that she couldn’t even fix the background, which she noticed was amiss.

In the end, Leen’s photo became the one that has most defined the New York School, and the article that followed helped spur the Met and other institutions in the city to start collecting Abstract Expressionism. Signs of change were almost immediately evident in the Met’s acquisition patterns. Within the coming decade, the museum began picking up notable works by Sterne, de Kooning, Motherwell, and Hans Hofmann, all of whom had signed the letter. In one notable case, the museum even bought an iconic Pollock, Autumn Rhythm (Number 30), from 1950, for $30,000. (Pollock’s dealer, Sidney Janis, had tried to place the work with MoMA for $8,000, but that museum’s acquisitions committee rejected the offer.)

“Today, notwithstanding their varying degrees of success, all the artists in Leen’s photograph have been ‘museumized,’” according to Vallejo and del Junco. In a way, the artists won—but the museum did too. Hadn’t the Met just earned more attention, and didn’t the museum act as the final arbiter in the end?

Signs that the gambit may not have entirely paid off were evident several years later when, in 1953, more than 40 artists—including Milton Avery and Edward Hopper—penned a letter decrying MoMA’s emphasis on Abstract Expressionism over figurative styles. In a bizarre press release issued in response, MoMA’s leaders defended their choice to uphold gestural abstraction, saying it was the museum’s job to bring any and all styles of note to the public. And besides, how could a museum be wrong if that’s what the people wanted? “Umpires are not infallible,” MoMA’s leaders wrote, “but we try to call them as we see them.”