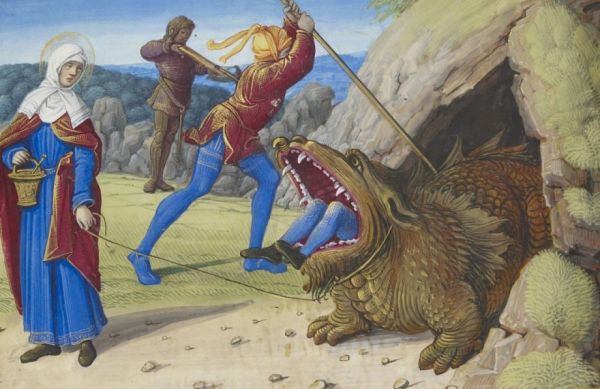 An exhibit called Medieval Monsters: Terrors, Aliens, Wonders is on display now through September 23 at at The Morgan Library & Museum in New York City. The artworks of Medieval Monsters were selected to show how the depiction of monsters communicated larger concepts. Fear of the different and the unknown could be harnessed to promote ideas such as the power of authority, the evilness of an opponent, and the punishment for sin.

“Monstrous imagery was often associated with members of socially disadvantaged groups in order to suggest that they were less than human; such a strategy rationalized repression and could even be used to instigate violence,” write curators Asa Simon Mittman and Sherry Lindquist in the accompanying catalogue. “In addition to the representation of nonnormative figures within European Christian culture, such as the mentally or physically impaired, whole groups of outsiders were also demonized. Representations of Jews and Muslims, whom Christians believed sinful for denying Christ, were made monstrous with exaggerated or animalistic features and graceless bodies, such as the caricatured representations of Jews — identifiable by their pointed hats — who torture Christ in a thirteenth-century German Book of Hours.”

The works would come with a trigger warning if they were drawn by hand. See some of the monsters with messages from the exhibit at Hyperallergic. -via Metafilter