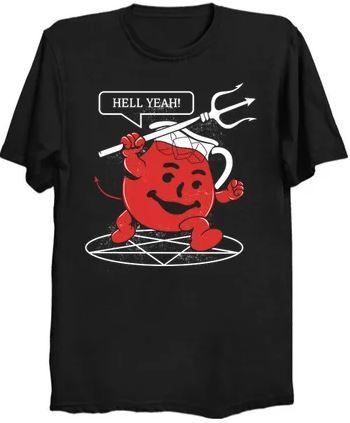 (Hell Yeah t-shirt on sale at the NeatoShop)

Today, on Twitter, I ran across the calculated weight of Koolaid-Man, the mascot of the Kool-Aid drink brand. Canonically, he’s 6 feet tall. So, assuming that he’s made of glass 3.6 inches thick that contains 607.6 gallons of water (plus the Kool-Aid mix and sugar), then he would weigh 11,000 pounds.

Kool-Aid man already exists as a monster in fifth edition Dungeons & Dragons. He has many powers, including magic resistance, the ability to charge an enemy, and what amounts to bardic inspiration.

These statistics made me wonder how much damage Kool-Aid Man could do if he was dropped on top of someone, which would be a useful action during combat. Although official sources address falling damage (how much damage a character takes by falling), it is silent on damage inflicted by falling objects. There is, though, some online debate upon it.

​One set of house rules assumes that an object in excess of 200 pounds falling 10 feet would do 20d6 (twenty six-sided dice) points of damage. For Kool-Aid Man, that would scale up to 1,100d6, which would be, on average, 3,850 hit points. Since almost all player characters would have hit points in the low double digits, a drop attack by Kool-Aid Man would leave a mark.

I am, of course, assuming a straight drop. If Kool-Aid Man is moving along a parabolic trajectory, the damage could be different. We might need to consult a physicist. Alex hired me for Neatorama based on my good looks, not my brains.

So, in short: Kool-Aid Man can do lot of damage. Maybe your party could avoid combat by having the bard attempt to seduce Kool-Aid Man.