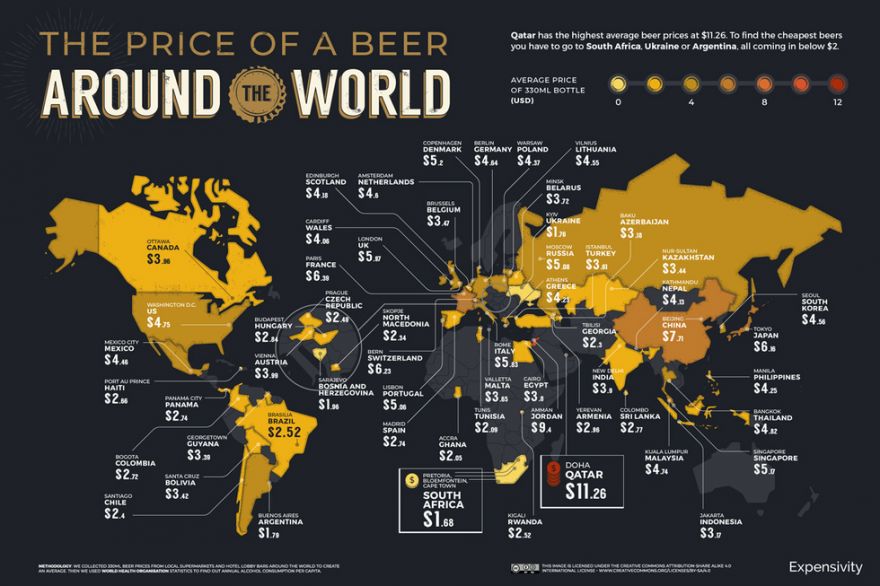 Hopefully by the time we’re all allowed to travel around the world, the cost stays the same. What better way to check alcohol prices than using an infographic? Personal finance site Expensivity tracked the cost of beer in some countries around the world. Researchers (for the website) considered grocery store prices, online menus from bars and hotels, and statistics on alcohol consumption:

The resulting World Beer Index 2021 shows the most expensive and cheapest places for brews, with Qatar at the pricey end ($11.26 per beer) and South Africa the most affordable ($1.68).

Beer prices also appear on a handy map, which is pictured at the top of this post and can be viewed in full size at Expensivity’s website. Prices have been converted to U.S. dollars—and, by the way, the average price of a beer in the U.S. is $4.75, according to the map.

When it comes to consuming suds, the Czech Republic tops the list; drinkers there put away 468 beers per person each year. At the other end, Haitians consume just 4 beers per person annually—a relative drop in the keg.

Luther’s native Germany, meanwhile, spends the most on beer annually: About $1,900 per person goes to filling steins.