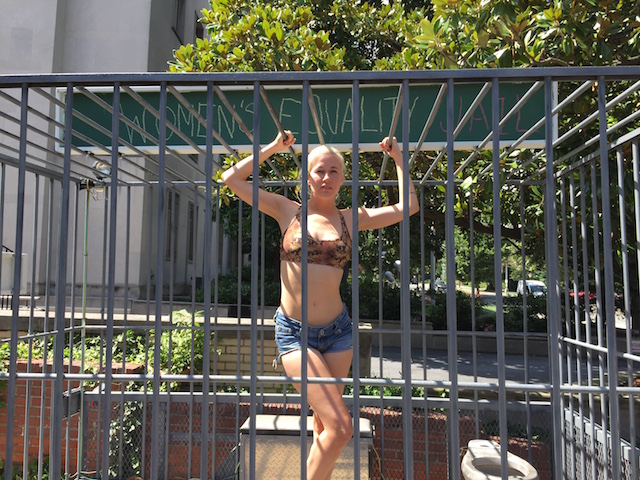 To taunt police, photos of White in “women’s equality jail” were posted to Facebook during the investigation. Courtesy Natalie White for Equal Rights

The rules governing civil disobedience are opaque, and New York-based artist Natalie White learned that lesson the hard way. After DC Capitol Police arrested White for writing “ERA NOW” in water-soluble paint on the sidewalk in front of the US Capitol Building, the feminist activist turned due process on its head by transforming her criminal trial proceedings for “defacing public or private property” into performance art advocating for the yet-to-be-passed Equal Rights Amendment (ERA).

“Most people don’t even know that women don’t have equal rights under the law,” White tells The Creators Project. Though the ERA, which would definitively prohibit discrimination on the basis of sex, was passed by Congress in 1972, it failed to be ratified. By the 1982 deadline for state ratification, just 35 states had approved the amendment, three short of the number needed. Since then, the ERA has been reintroduced during every subsequent session of Congress, and though polls indicate that more than 90% of Americans support the amendment, Congress has not once voted on it in the last 30 years. 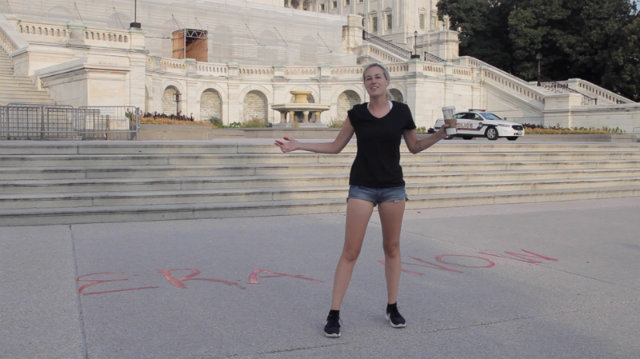 Natalie White after writing “ERA NOW” on the pavement in front of the US Capitol. Courtesy of Sheila Maria Lobo, from the upcoming documentary NSFW: Not Suitable for Women 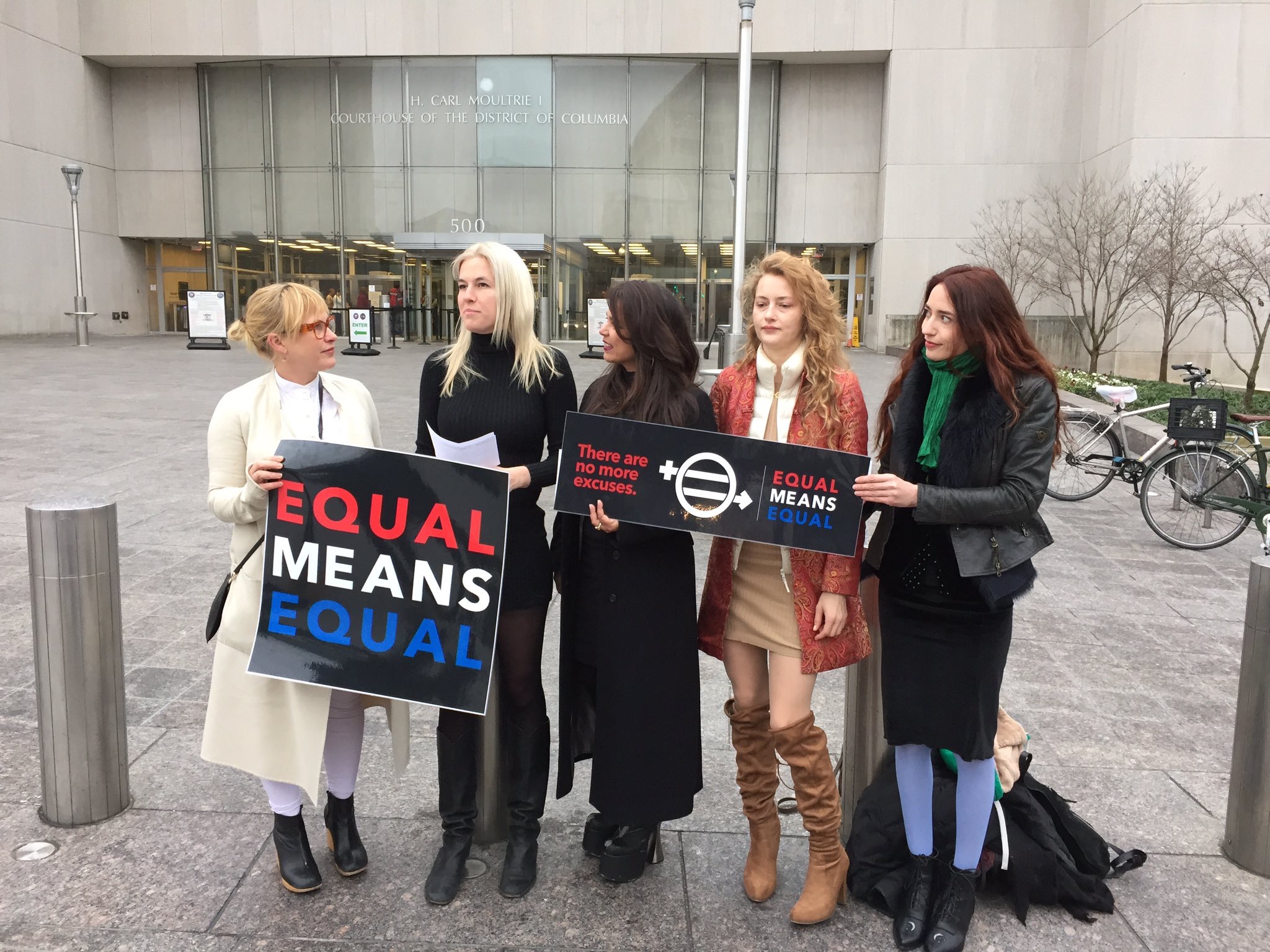 Fighting for visibility of the ERA is a cornerstone of White’s artistic practice, and in July 2016, she led a 16-day, 250-mile march from New York City to DC to advocate for its long-overdue adoption. The day after, White went to the Capitol and penned her message on the sidewalk, in broad daylight. At first, she got off scot-free. But an article in the New York Post set off a madcap investigation by Capitol Police that culminated in a night in jail for White.

“What shocked me was the exorbitant expenditure of taxpayer money by Capitol Police on this case,” White says. The District flew two officers from Washington to New York to arrest White at her home, but as evidenced by her social media accounts, White never left DC. Police put out a federal warrant for her arrest, and when White turned herself in, she was locked up. The police also submitted evidence for forensic fingerprinting analysis and brought five government witnesses in to testify at her trial.

“Why would they even choose to prosecute this case? They’re taking a prosecutor away from actually going after criminals. They’re going after me, when they could be spending that money on testing rape kits or prosecuting perpetrators of domestic violence. It’s ridiculous,” White says. 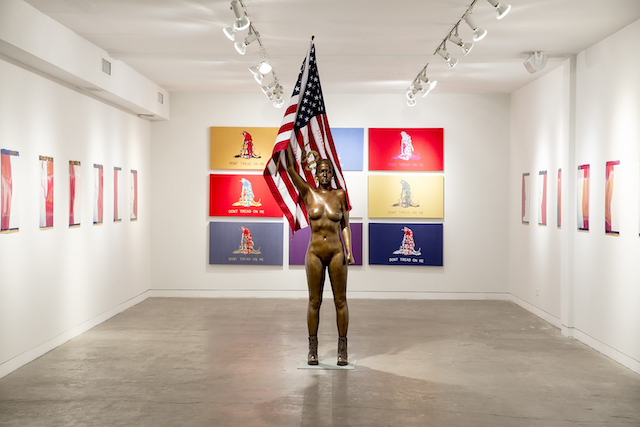 Fortuitously, the trial was scheduled for January 17, just days before Trump’s inauguration and the Women’s March on Washington, so White decided to transform the court proceedings into pro-ERA performance art. Advised by acclaimed DC first amendment attorney Mark Goldstone and legendary New York civil rights attorney Ron Kuby, White represented herself, presenting “a creative defense that confronts the cultural climate that has been pervasive since long before the Equal Rights Amendment’s introduction to Congress in 1923, and which Trump is slated to perpetuate and amplify nearly a century later.” She enlisted friends and fellow pro-ERA activists like model Lizzy Jagger and Academy Award-winner Patricia Arquette to act as character witnesses. 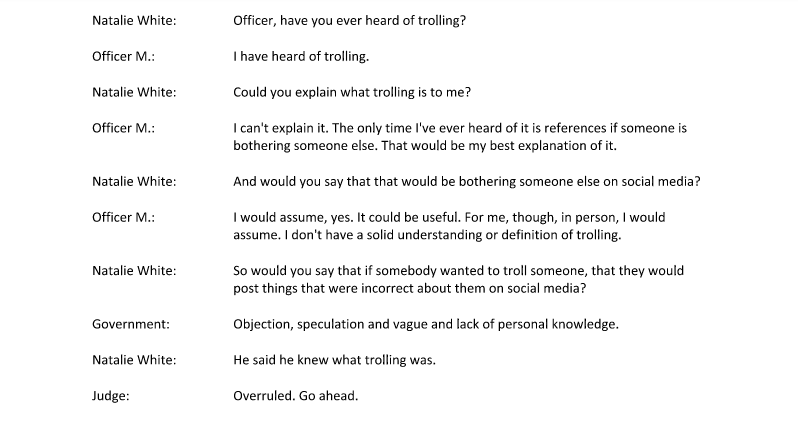 Excerpt of the courtroom transcript from the United States of America v. Natalie White (January 17, 2017)

Goldstone and Kuby warned White that bending the rules of the courtroom by answering the charges of vandalism with political defenses might not work with the judge assigned to her case. “At the beginning […] he was cutting me off a lot. Midway through, he really came around, and I was able to get my monologue out, and get my message out. I was able to question the police officers and my own witnesses,” White says.

The judge ultimately found White guilty, due to legal precedence from a case in which pro-life protesters were found guilty of vandalism for drawing a chalk mural in front of the White House. But during sentencing, the judge also voiced his support for White’s actions, calling civil disobedience a longstanding American tradition. The court sentenced White to a $50 charitable donation and a six month stay-away from the Capitol, except to meet with lawmakers in an effort to pass the ERA. “That’s not something that’s ever granted to anyone, but I convinced the judge to let me go to the Capitol, pretty much for what I consider to be the reason why you should be going to the Capitol in the first place,” White says. 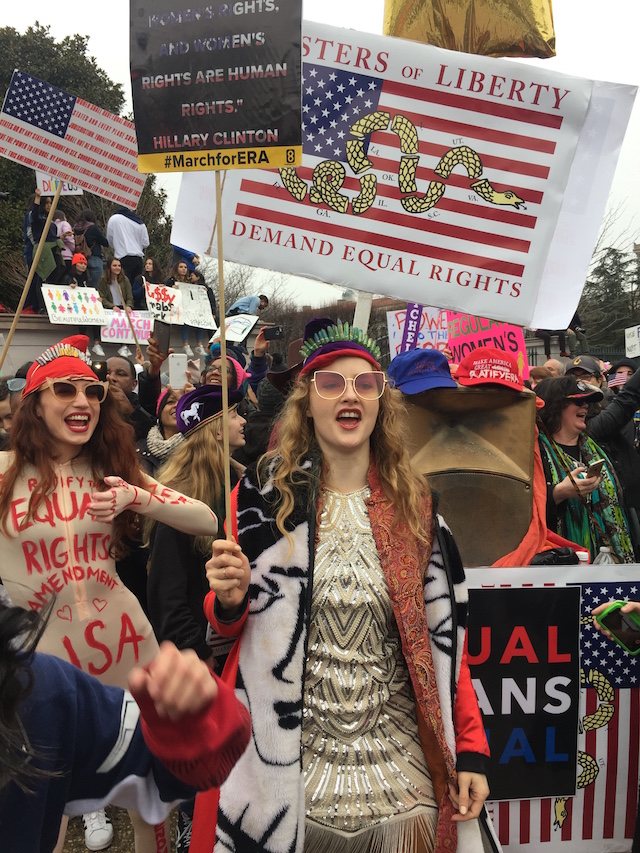 Days after her trial, now a free woman, White rallied at the Women’s March on Washington with Jagger, Arquette, and activists Kamala Lopez and Sarabeth Stroller. I happened upon them, somehow, amongst more than half a million people who’d descended on the National Mall to oppose the Trump administration and demand women’s rights. Working the crowd, megaphone in hand, White was magnetic—an ERA crusader sowing seeds of anger and action amongst the men and women she addresed. It was clear the court proceedings hadn’t gotten her down. Though “the man” had tried to silence her, it’d take a lot more than a vandalism charge to curtail White’s crusade for Equal Rights. 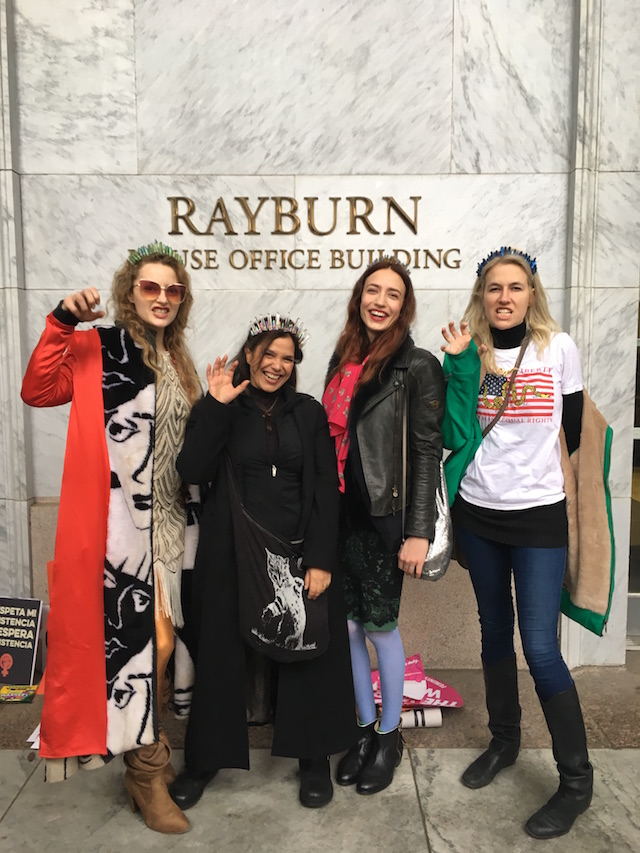