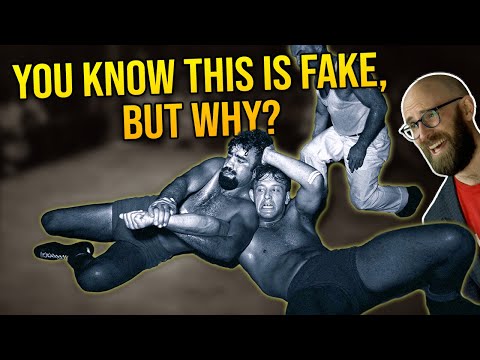 I recall some serious arguments in the my childhood between kids who insisted wrestling is fake and those who insisted it’s real. What did we know- we were kids. According to Simon Whistler, the audience for professional wrestling was pretty much in on it from the beginning. Oh, wrestling was as serious as prizefighting and horse racing back in the day, but in the early part of the 20th century, spectators realized that legitimate wrestling was rather boring. Promoters stepped in to make it more exciting, and it became “staged” (which is a better description than “fake”). Those who produced the matches did anything they could to put butts in the seats. It wasn’t long before betting died out of pro wrestling, but there was always money in tickets and later on TV. And there were plenty of other sports one could place a bet on.

This latest video from Today I Found Out goes through the history of wrestling and the steps taken to make it entertainment. You can skip to 1:18 to get to the subject matter. -via Boing Boing

You can also read the story of pro wrestling in our previous articles, The Man in the Mask and The Legend of Gorgeous George.

A Massive Family Retreat With a Cozy, Mid-Century Inspired Interior

What Does The Rosetta Stone Actually Say?

The Library of Obsolete Sounds

The Ragdoll Husband: Uncovering The Truth