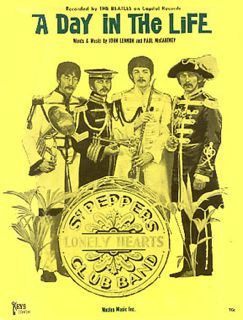 This coming Friday, May 26, will be the 50th anniversary of the release of the Beatles album Sgt. Pepper’s Lonely Hearts Club Band. The Atlantic takes a close look at one of its most memorable songs, “A Day in the Life.” It’s no sing-along, but more of an anthem that reflects the many changes the Beatles had gone through since finding fame in the early ’60s. For example, John Lennon makes himself into an observer of life from inside a bubble instead of a participant.

That’s how he was writing, beachcombing inspiration from headlines and news briefs in the January 17 Daily Mail, which he had open at his piano (for this song); from a circus poster hanging in his home (“Being for the Benefit of Mr. Kite”); from a cereal advertisement (“Good Morning Good Morning”); from his child’s drawing (“Lucy in the Sky with Diamonds”). In the song, the young man whose death gets noticed in the newspaper references an acquaintance of the Beatles, a Guinness beer company heir named Tara Browne, who crashed his Lotus sports car at high speed. Lennon reimagines Browne into the half-recognizable, presumably upper-class man who has it made and then throws it all away. What does it say that one crowd is transfixed by a privileged stranger’s grisly demise, but another crowd rejects a film about the achievement of a generation, the world war won? Only the singer of the song is willing to go back there, and only because he’s read the book.

There are many layers to the song, deconstructed in an article at the Atlantic. -via Metafilter