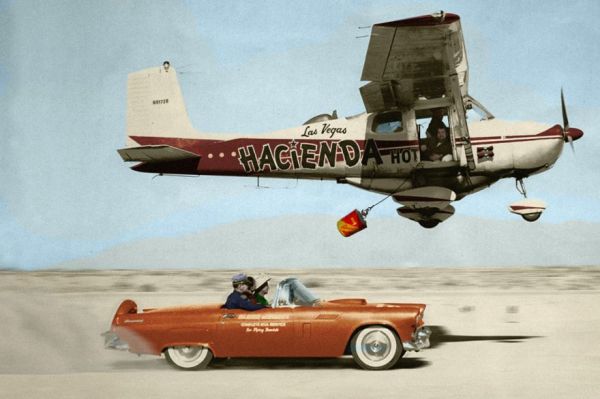 Warren Bayley owned the Hacienda, a family-style resort in las Vegas, that had a hard time competing with the big casinos with flashy shows. He needed a promotion. Slot machine repairman Bob Timm, who was also a pilot, suggested they break a world record. Pilots had been setting endurance records for decades by the 1950s, and the longest time a plane had stayed in flight was 46 days. Even approaching that limit could fill a lot of room-nights and make the Hacienda a household name.

So Timm bought a used Cessna and altered it for an endurance flight, which began on December 4, 1958, with Timm and John Wayne Cook piloting. Now, a small plane flying for days would need to refuel without landing, and they did not have the Air Force to fly in with a hose. So the fuel came from a truck going as fast as it could while the plane flew low and as slow as it possibly could without stalling. Filling the plane’s tanks took about three miles of synchronized travel, and they had to do it every 12 hours. And the world record was 50 days by then.

A lot can go wrong in 50 days. The autopilot feature saved their lives once when Cook fell asleep, but then quit working a few days later. Then the electrical generator quit, making nighttime refueling more hazardous without lights. Other parts of the plane failed as they reached their maintenance limit, and there were quite a few close calls. When the specially-designed fuel truck broke down, they used a T-bird with gas cans to refuel.

Despite all the problems, the Cessna broke the record and added another two weeks! Read about the amazing small plane that finally landed on a wing and a prayer at Damn Interesting. You can also listen to the story in podcast form.