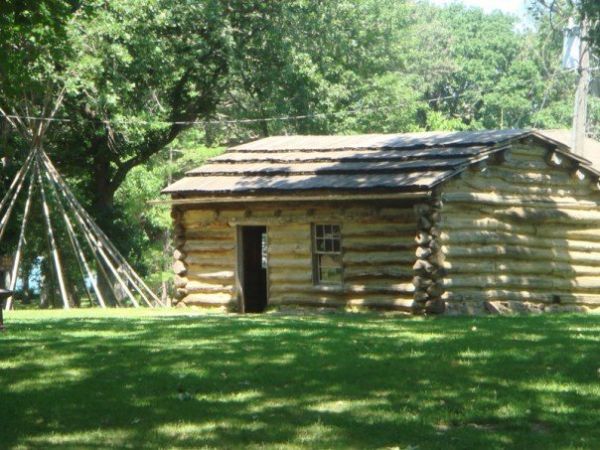 A log cabin is more than a sturdy shelter- it has become the symbol of the pioneering spirit of America. It wasn’t always that way. Despite the pictures you’ve seen in history books, the earliest English settlers in America did not build log cabins. The structure arose out of necessity later on, because it was relatively easy to put together from available materials when you don’t have a sawmill. A log cabin was a step up from a dugout or sod house. Still, log cabins did not have a great reputation, and were often considered a temporary shelter until a proper house could be built.

Benjamin Franklin wrote that there were only two sorts of people, “those who are well dress’d and live comfortably in good houses,” and those who “are poor, and dirty, and ragged and ignorant, and vicious and live in miserable cabins or garrets.” Dr. Benjamin Rush, Surgeon General of the Middle Department of the Continental Army and a signatory to the Declaration of Independence, said the cabin dweller was “generally a man who has out-lived his credit or fortune in the cultivated parts.”

As for cabins themselves, they were generally seen as “rude” and “miserable,” and no self-respecting American would deign to live in one. Not permanently, at least. Cabins back then were temporary stepping stones meant to be abandoned once something better could be afforded; barring that good fortune, they were to be covered with clapboard and added to as the cornerstone for a finer home.

The log cabin became the symbol it is today due to the way it illustrates the rise from a difficult life of poverty, as in Abraham Lincoln’s story. But it wasn’t because of Lincoln- it was an earlier political figure that make the log cabin an icon, in a story you can read at Mental Floss.