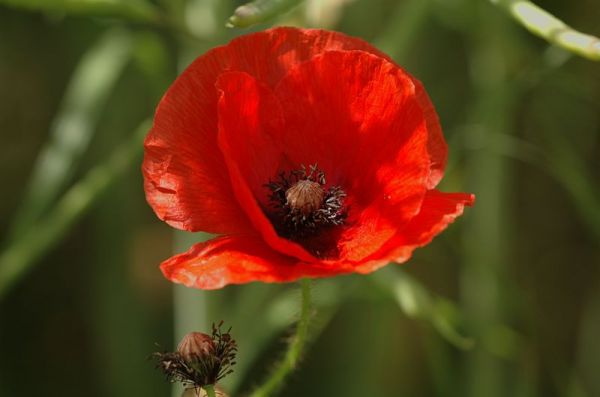 On Sunday, the world will mark the 100th anniversary of the end of the “war to end all wars.” World War I ended on the eleventh day of the eleventh month, and ever since, November 11 has been commemorated as Armistice Day, Remembrance Day, Memorial Day, or Veteran’s Day, depending on which country you live in. England has especially embraced the poppy flower as a symbol of the end of the war, due to its peculiar biology.

The common poppy, Papaver rhoeas, is an annual plant in the Papaveraceae family. It produces seeds that can remain dormant in the soil for as long as 100 years. Since the seeds need light to grow, they only germinate in disturbed soils. Trench digging, bombs, and mass cemeteries decimated Europe’s landscape during World War I, causing millions of poppies to bloom on the disrupted soil. Imagine the contrast between the horrors of war and the beauty of red poppies blanketing the European countryside.

But it took more than the sight of flowers to turn the poppy into an international symbol. Read how it happened at Smithsonian.