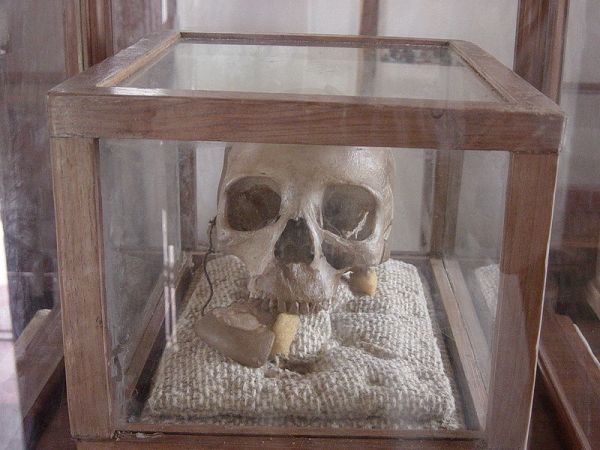 At nearly 200 pages in length, the Treaty of Versailles that officially ended World War I covers many topics, from territorial changes to how everything is Germany’s fault. Articles 245-247 address the return of various prizes of war that had been captured by the Germans. 246 requires the return of a stolen Koran and, most curiously, a human skull:

Within the same period Germany will hand over to His Britannic Majesty’s Government the skull of the Sultan Mkwawa which was removed from the Protectorate of German East Africa and taken to Germany.

What’s going on here? For the full story, I highly recommend reading the clear and thorough detective work of Dr. Juliette Desplat of the UK’s National Archives.

Mkwawa was the Chief of the Hehe tribe in German East Africa who actively resisted the German conquest. German troops killed him in battle in 1898 and took his excarnated skull back to Germany as a trophy.

During World War I, the Hehe rose up against the Germans, which impressed British officials in Africa. They decided to try to recover the skull of the fallen Hehe hero from the Germans.

Desplat proceeds through the long history of this particular skull from 1898 until its delivery to the Hehe tribe in Tanzania in 1954. It’s a great read because, in part, the issue of the skull is a microcosm of the diplomatic history of so many eras: World War I, the interwar period, World War II, the rearmament of Germany during the Cold War, and the Decolonization of Africa.