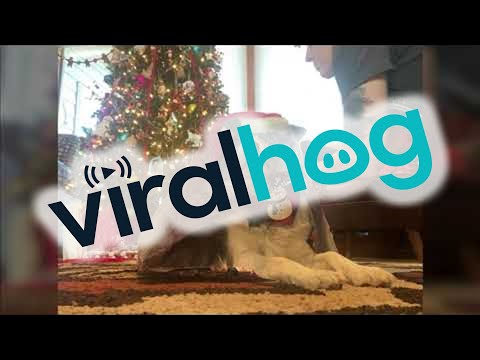 Shiloh is an Australian shepherd and Abu is a border collie. They are both very good dogs. Or at least very patient as they get wrapped for Christmas. You can see in their eyes that they consider this a very stupid game, but they love their human so they endure it quite stoically. Why do humans put dogs through such nonsense? As far as dogs know, most of what we do is nonsense and they deal with it because they are good dogs. They don’t know whether this Christmas wrapping has a bigger meaning for us or not, but it makes about as much sense to them as when humans go off to work or use a porcelain fixture to do their business. Or bring a tree in the house and put lights on it.

Both Shiloh and Abu were rescued from a neglectful owner, and were adopted by their foster mom in Nebraska. Despite the Christmas wrap, she is not parting with either of them. -via Laughing Squid