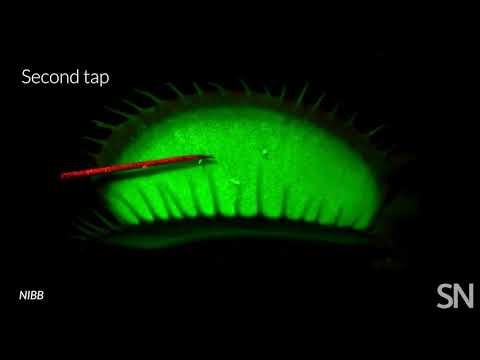 It may seem absurd to think that plants have a short-term memory, but considering the way that Venus flytraps know when to snap shut on a bug, the alternate explanation is that they can tell time. So, memory it is. See, one touch of a flytrap plant will not ignite the leaf-closing reflex. That would drain too much energy on false alarms. The flytrap shuts when a second touch sensation is detected within 30 seconds.

The researchers added genes to the Venus flytraps that produce a protein, which glows green when exposed to calcium. When the team tapped one of the trap’s sensory hairs, the base of that hair began glowing, and then the glow spread through the leaf before beginning to fade. When the researchers touched the hair a second time — or touched a different hair on the leaf — within about 30 seconds, the trap’s leaves lit up even brighter than before, and the plant quickly snapped shut.

The results show that the flytrap’s short-term memory is a waxing and waning of calcium within leaves’ cells, the researchers say. Each time a sensory hair is triggered, it signals the release of calcium. When the calcium concentration reaches a certain level, achieved by that second, faster surge of calcium, the trap closes.

However, there is a second system in the flytrap that involves electricity, which means more research is needed. Read more about the experiment at ScienceNews.   -via Boing Boing