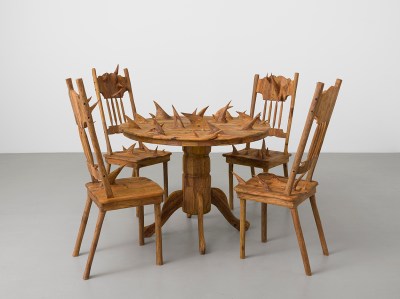 You could be forgiven for mistaking Hugh Hayden’s exhibition “American Food,” recently on view at Lisson Gallery in London, as a response to the tumult of 2020. The largest works, three full-size picnic tables, bristle with surrealistic outgrowths: branches left in their natural state or trimmed and smoothed off, or tapered. In the most striking example, titled Honorary Natives and the elephant in the middle of the room, they’re carved into sharp projections, like tusks or giant thorns. Step too close, and you could be impaled. Talk about social distancing: this is the perfect furniture for a pandemic.

The show’s second main body of work was a series of twenty-six iron skillets, which hang from the walls like silent spectators. Each one incorporates the cast of a found African mask. Each also has a unique patina, giving it a slightly different brown tone. They are as chromatically diverse, Hayden has said in Zoom interviews with me and with curator Elvira Dyangani Ose, as the colors of Back America. Like his weaponized furniture, the skillets seem to speak directly to current events. One can read both pain and pride in their abstracted faces; they perform as a sculptural chorus for the Black Lives Matter era, bearing witness to trauma, outrage, and hope.

In fact, the works that were shown at Lisson have been some time in development, long predating the onset of the coronavirus and the killing of George Floyd. That the sculptures register recent events so presciently is more than luck, though. Hayden has an uncanny ability to generate potent visual metaphors that are open to subjective interpretation. If we see our present-day concerns reflected in his sculptures, that only suggests how adept he is at making mirrors.

On a purely physical level, the pieces in “American Food” have a certain universality, having been produced with time-honored craft techniques. (Hayden wears his artisan allegiance on his sleeve, if a little ironically—the top line of his website reads, “favorite sandpaper: 60 grit . . . sometimes 400 or 1000 too.”) There’s no trick joinery in the wooden tables; the planks and the branches are integral, each hand-hewn, or springing naturally, from the same forked section of a tree. The skillets are sand-cast in a foundry, much as utilitarian ones have been for centuries. These direct means of production lend the objects a fundamental quality, anchoring them firmly in history. 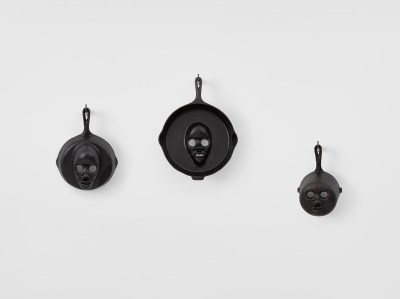 Yet Hayden—who has exhibited steadily since earning his undergraduate degree in 2007—also brings to his works a subtle legerdemain. His first projects, staged while he was an architecture student at Cornell University, were dinner parties (he now calls them “culinary installations”) in an avant-garde mode. Visitors might be served banana splits or pureed buffalo chicken wings, squeezed from a tube. Later, the artist painstakingly plucked feathers, often used to make fishing flies, off dried bird skins, and glued the plumage onto objects in order to achieve beguiling trompe l’oeil effects (feathered logs or feathered Audubon prints, for example). He likens the process to “taking a bird apart, editing its history, and remixing it.” By 2012, Hayden was braiding the hair of taxidermy specimens, in one case laying two broad continuous strips of braided synthetic hair over the hood and roof of a Ford Mustang. What these formative projects had in common was an interest in identity, which Hayden treated as an open-ended masquerade: if I weave cornrows into the hide of a cotton-white mountain goat, how will that signify?

Prior to the Lisson exhibition, Hayden’s most ambitious show was “End of Days,” staged last year at C L E A R I N G in Brussels. Struck by the gallery’s vaulted exhibition space, which reminded him of a medieval cathedral, Hayden developed a body of work on the theme of contemporary spirituality. The centerpiece was The Temptation Inside and Torment of St. Anthony (2019), a red-flocked, headless skeleton with a long tail, inspired by the lurid atmosphere of Hieronymus Bosch’s portrayal of the saint. For Hayden, the skeleton motif is an end run around the identity politics of figuration; unless you’re a trained specialist, you cannot tell whether someone is Black or white, male or female, just by looking at their bones. Yet this gesture toward commonality—we’re all the same, deep down—is complicated by the sculpture’s devilish aspect: strip us truly bare, we might not like what we see. 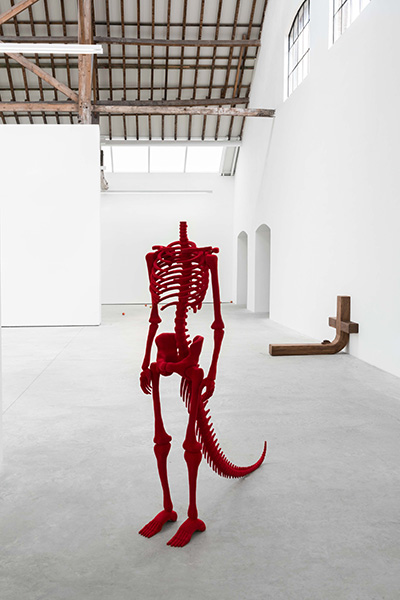 Also included in “End of Days” was a small sculpture with an outsize status in Hayden’s career; its realization was extremely demanding, and it remains a singular, powerful presence in his oeuvre. Conceived as a twenty-first-century nkisi—a type of spirit-figure made in the Congo Basin—the object also alludes to Jeff Koons’s Rabbit (1986), while generating its own mesmerizing iconography of contemporary desire. Hayden began with a found African wood carving, then had it silver-plated and polished to a high reflectivity. (He left the base of the sculpture untreated, to reveal the figure’s original material.) In its belly, where potent medicine might be held in an actual nkisi, he placed a little trove of Truvada, the HIV-prevention drug. Hayden called the sculpture Invisible Man, a reference to the Ralph Ellison novel but also to the new lease on life that pharmaceuticals have bestowed gay hookup culture—an underground sexual revolution.

Another sort of desire is indexed by the packing crate that Hayden used as a plinth, an allusion to trade in African antiquities and, by extension, the slippery questions that surround these objects. The found sculpture that he encased in precious metal is of unclear provenance, like the masks that he has cast into his skillets: “How African is it?” Hayden asks, rhetorically. “How real is it, how old is it, is it a tourist object, is it fake?” These questions of authenticity land at an epistemological impasse, further emphasized by Hayden’s material transformation of the object, which results in “a loss of information,” since the original surface is visible only at a remove. Hayden’s nkisi is adrift in history, its status a matter of projection rather than established fact. 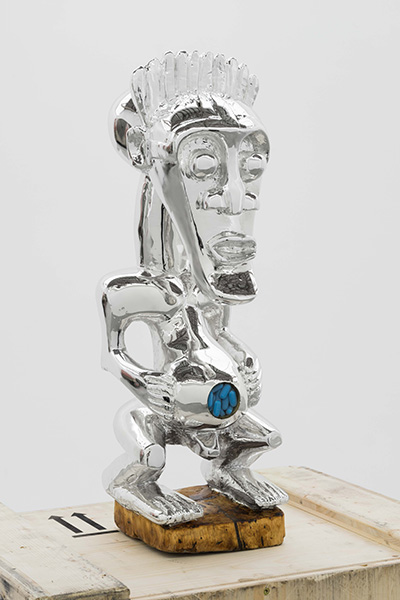 These ideas connect in a provocative way to the legacy of the African diaspora, which involved not just violent displacement, but also a willful erasure of personal histories. This is the tragic backdrop for Hayden’s imaginative, even playful analogies for identity formation. For example, the phrase “honorary natives,” in the aforementioned title, refers to the Sussex chestnut timber from which the sculpture is made. This tree was introduced to Britain in Roman times, but is now regarded as indigenous. Hayden has also worked with mesquite, which presents the opposite case—it’s a species native to the US/Mexico borderlands that is treated as invasive and unwelcome, because it grows so rapidly. He’s worked as well with Texas ebony, which, given that he’s a Black man from that neck of the woods, could be construed as a material self-reference. This question of what (and who) belongs where is, of course, “the elephant in the room,” the least comfortable of all topics, but one we need urgently to confront. The spiky protrusions of the sculpture that bears this title suggest the difficulty of this confrontation. Are they protecting the table, or staging an assault on the space? The answer of course is, both: territorialism is always, in some sense, an act of aggression.

Yet there’s an important place within Hayden’s critical practice for hope. One of the tables shown in the Lisson exhibition is titled Communion; another, Can’t we all just get along, after the plaintive words of Rodney King. Elsewhere in the show too are subtle moments of reconciliation. One trio of skillets is named The Cosby’s, after the disgraced entertainer. Hayden has mentioned that the “Cosby Show” (which was important to him growing up) was a group effort—the broader point being, that we should not simply abandon parts of our cultural history, even the most discredited.

When the Black Lives Matter protests rose up in righteous anger this spring, Hayden says, he thought to himself: “I want to be helpful and create exchange. If ever there was a chance to do something, it would be right now.” Constructive discourse has always been implicit in his work, but he also wanted to do something less metaphorical, more concrete. So he began a dialogue with Alex Logsdail, executive director of Lisson Gallery, about the idea of creating a fellowship for a deserving socioeconomically disadvantaged student at Columbia University, from which Hayden himself received his MFA in 2018—essentially, a chance for someone to follow in his footsteps. The fellowship is named for his own father, Solomon B. Hayden, extending this idea of succession. It’s not an artwork. But it’s very much in keeping with the spirit of everything else the artist does. “We can’t solve all the world’s problems,” Hayden says. “But this is a start.”