As an adult, it can be difficult to balance your friendships and relationship with your significant other. On the one hand, you want to spend quality time with the people you trust and who you’ve known for ages. On the other hand, you also want to ensure that you’re spending quality time with your partner. No matter your relationship—whether platonic or romantic—healthy boundaries are essential. The only question is what these boundaries actually look like.

Redditor u/Remarkable-Use-8439 made a big splash on the Front Page of the Internet after sharing a story about how his tech-free weekend went wrong. He asked the AITA online community’s opinion on whether he was wrong to turn off his phone to avoid his wife’s “unnecessary contact attempts,” only to miss an actual emergency later on. Scroll down for the redditor’s story in his own words, and to find out how the internet reacted to the situation. Many Reddit users had very strong opinions about the story.

Bored Panda has reached out to u/Remarkable-Use-8439 via Reddit, and we’ll update the article as soon as we hear back from him.

Trust, honesty, and boundaries form the foundation of healthy and happy relationships 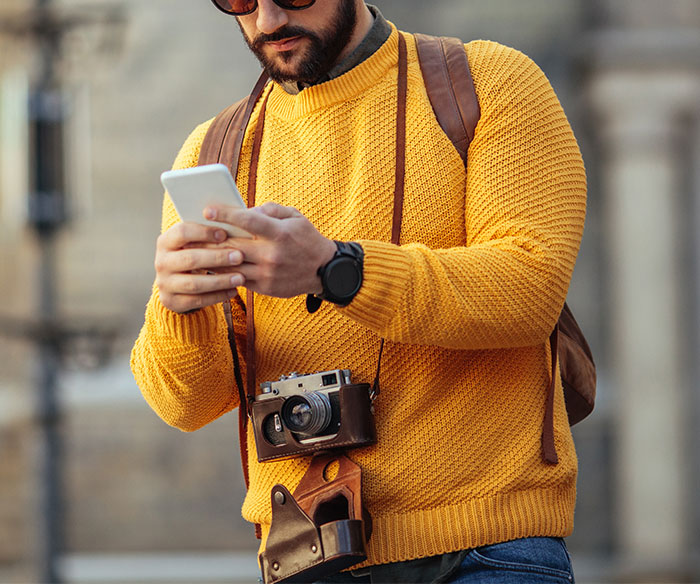 A man shared how upset his wife got after he turned off his phone during a tech-free weekend with his best friend. He missed a family emergency 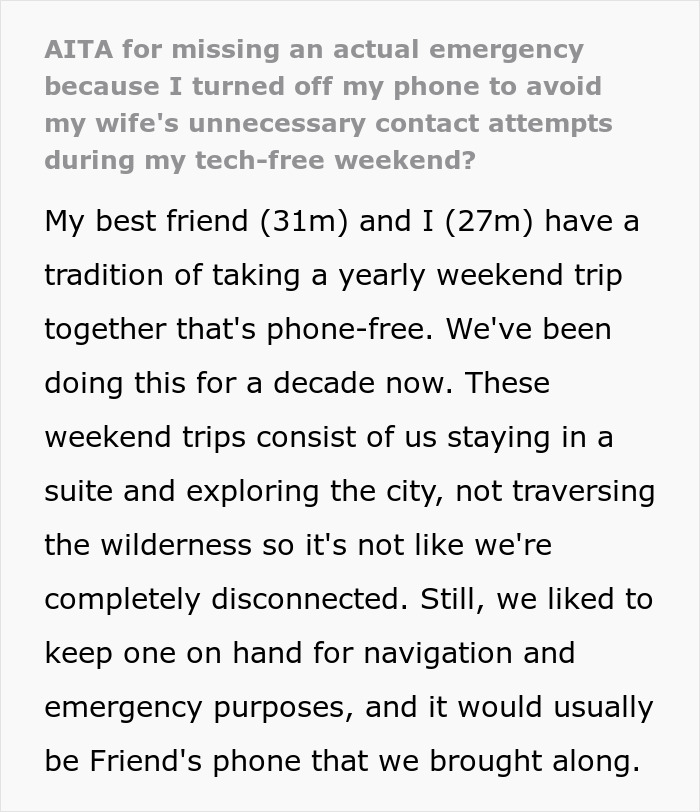 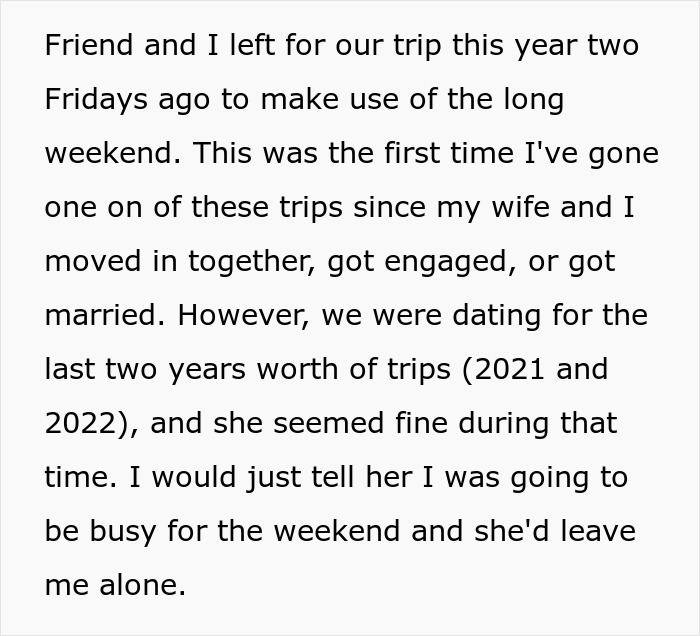 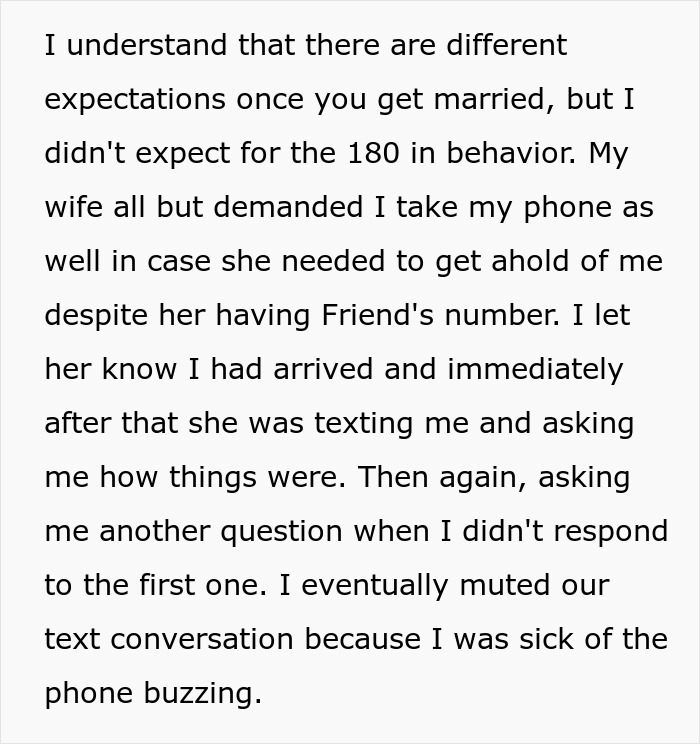 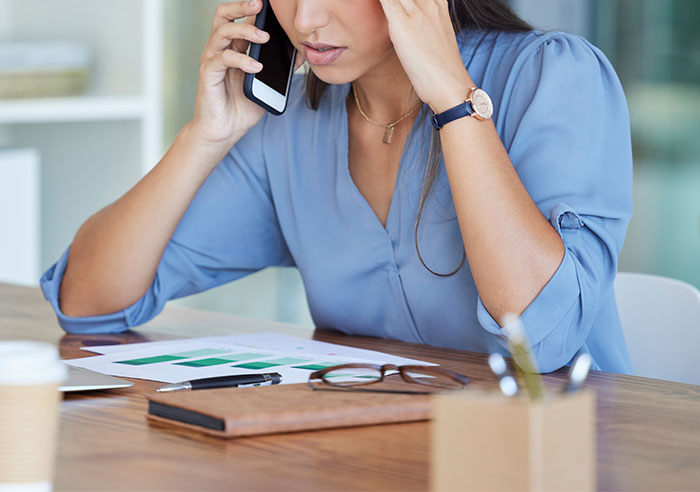 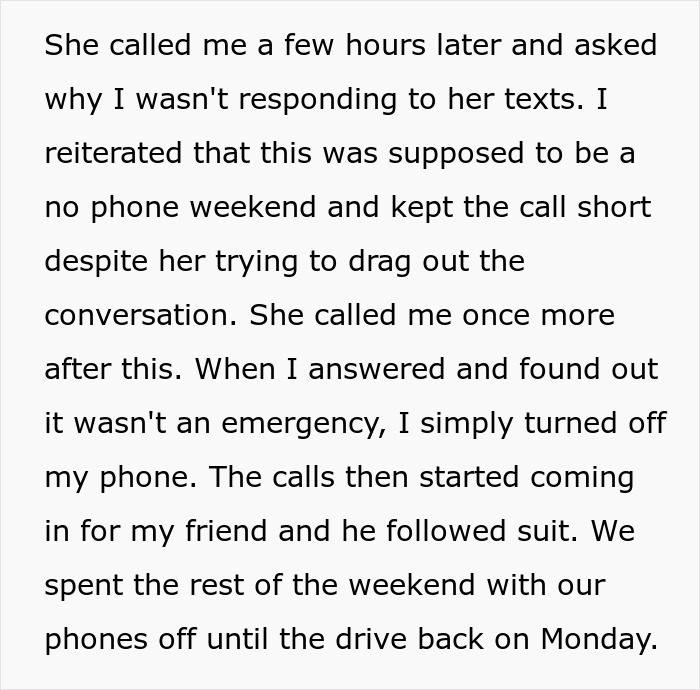 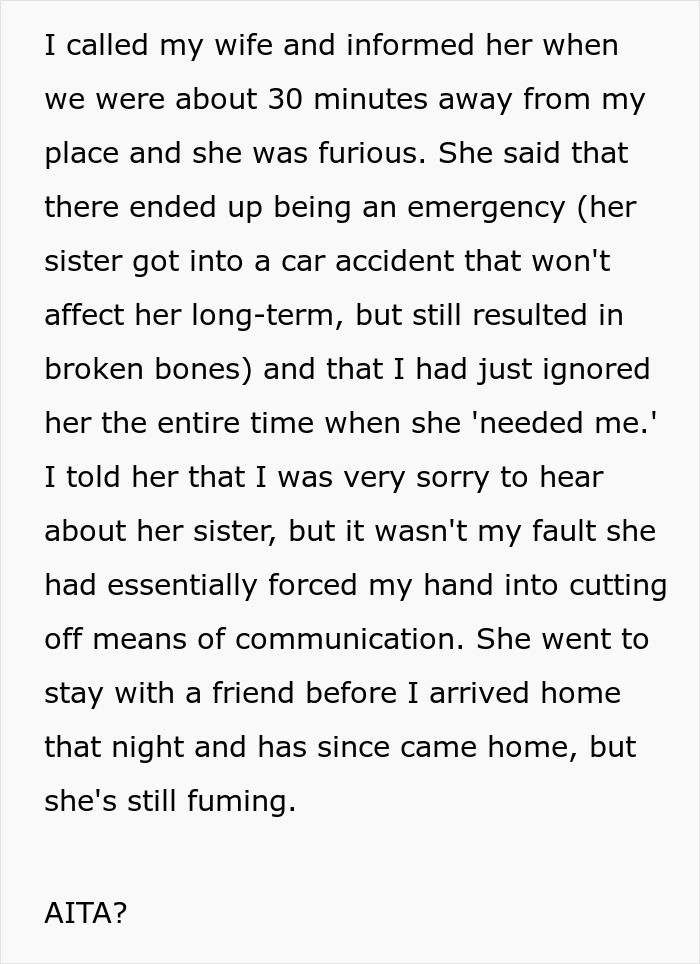 The author of the story later posted a couple of updates 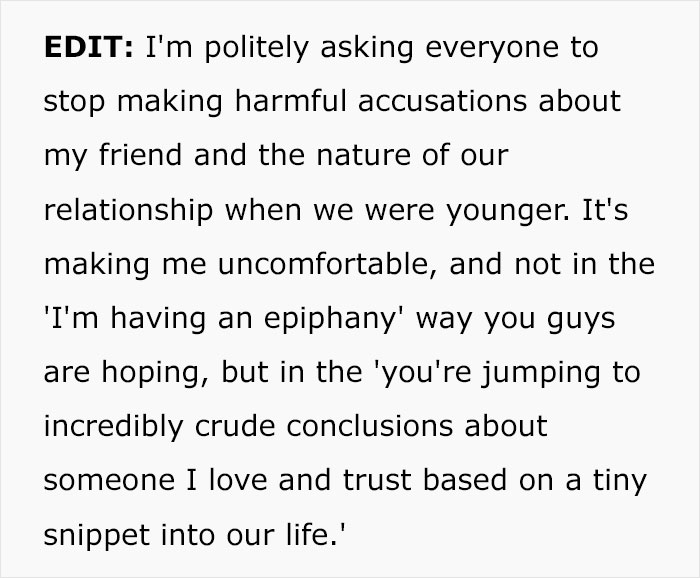 At its core, the story is about trust, communication, and the couple trying to figure out each other’s boundaries, in terms of privacy. The redditor shared how he had a long-running annual tradition to have a tech-free weekend with one of his closest friends. This was something that his wife seemed to be all right with before.

However, this year, everything changed. The author of the post recounts how his significant other suddenly started checking in on him during the trip through texts and, later, calls. According to the OP, this was a 180-degree change in her behavior.

He ended up muting the message chains and then turned off his phone so that his tech-free weekend would be exactly that: tech-free. When he got back home on Monday, he was in for a nasty surprise. It turns out that during the time that his phone was off, there was an actual emergency in the family.

His wife’s sister had gotten into a car crash. The redditor’s wife felt like her husband had ignored her when she needed him the most. This dramatic situation was what got the redditor to share what happened with the AITA community in the first place. His story got a lot of attention, netting over 16.4k upvotes.

Overall, the vast majority of redditors were sympathetic and supportive of the OP. However, many others wondered what exactly the nature of his relationship with his friends was. Whether it was, in fact, purely platonic. There was an intense discussion about what friendships can look like, and how boundaries can seem blurred when viewed from the outside. Some redditors even changed their minds, as the OP revealed more information about what happened.

There is a vast difference between privacy and secrecy. Transparency and trust form the bedrock of any romantic relationship. However, at the same time, it’s vital that people remember that their partners aren’t just their partners—they’re individuals with hopes, dreams, ambitions, hobbies, friends, and (sometimes) a need to be alone. It’s healthy to have some privacy, and not every single aspect of your life has to be something that’s shared with your partner.

Essentially, one thing that you should ask yourself is whether the information that you’re withholding would directly impact your partner. If it would, then you should opt for transparency. Try to imagine yourself in their shoes and think about things from their perspective.

However, you have the option of keeping things to yourself if what you’re doing doesn’t impact your partner. Generally speaking, if you’re feeling a sense of shame or guilt, then the odds are that what you’re doing is secretive, not private. Restoring trust, if broken, takes time and consistency. Smaller offenses take less time, larger ones take far longer to get over. In some cases, reaching out to a therapist or a couple’s counselor might help move them forward.

Initially, many people started saying that the man did nothing wrong, until he shared some more information

The husband revealed some more details in the comments of his post. Some readers later changed their opinions 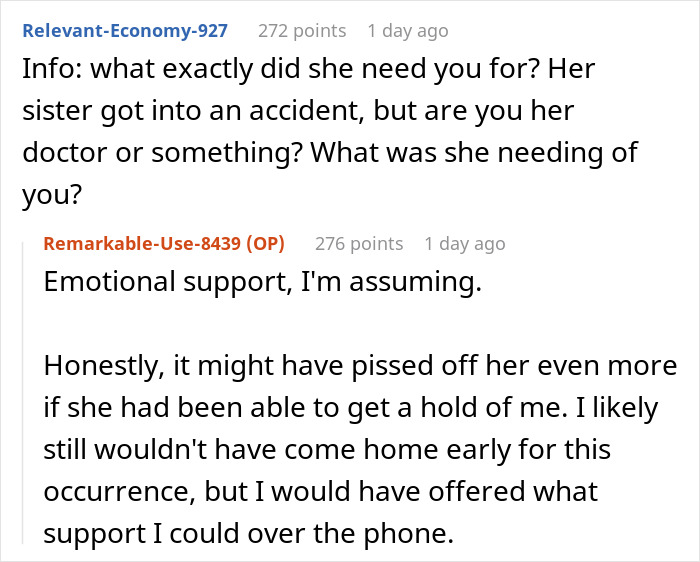 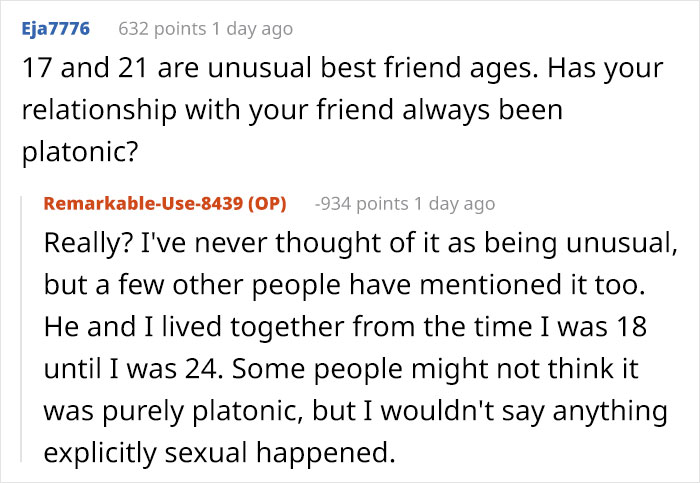 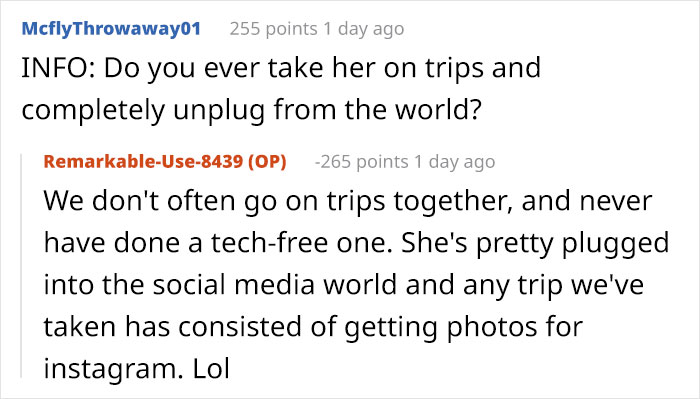 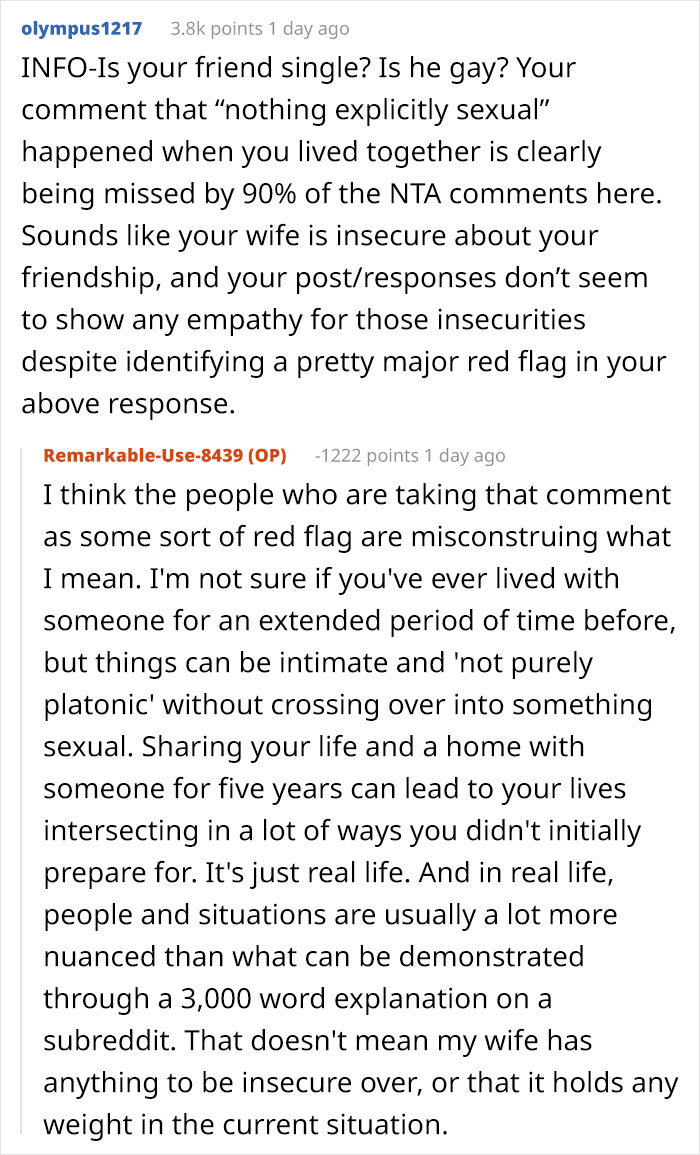 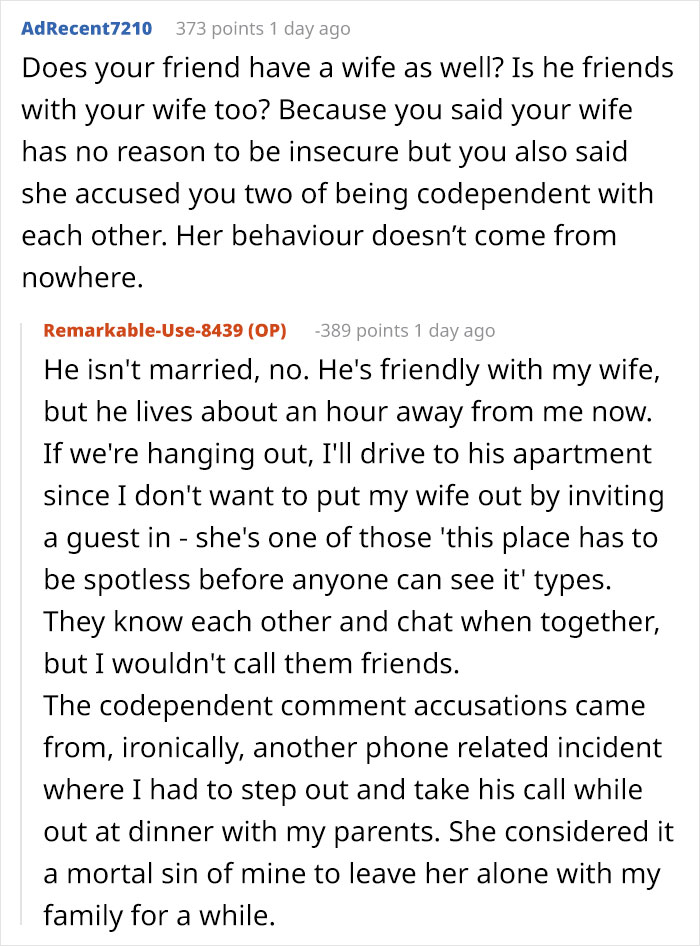 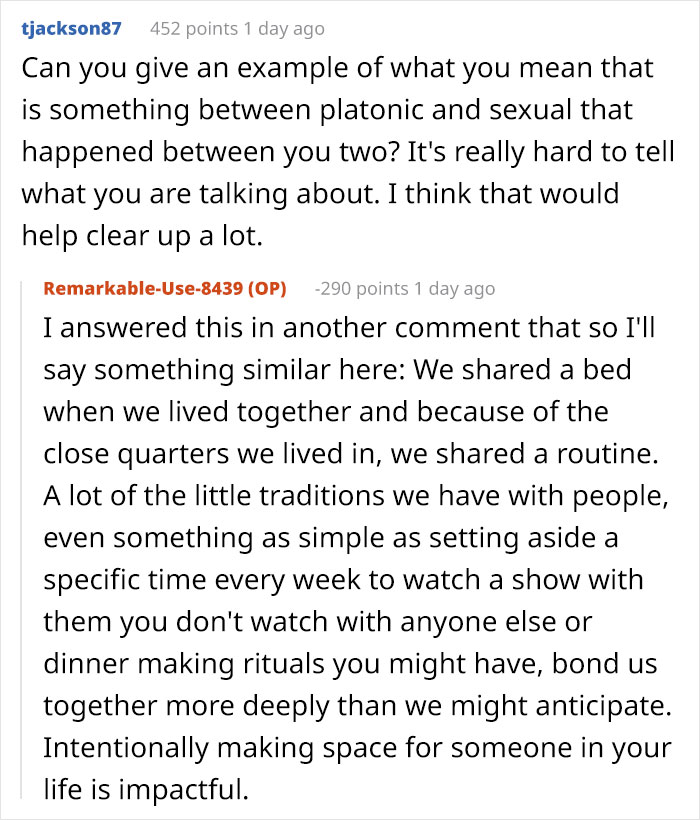 Reactions to the man’s post were mixed. Some internet users thought that he was definitely in the wrong 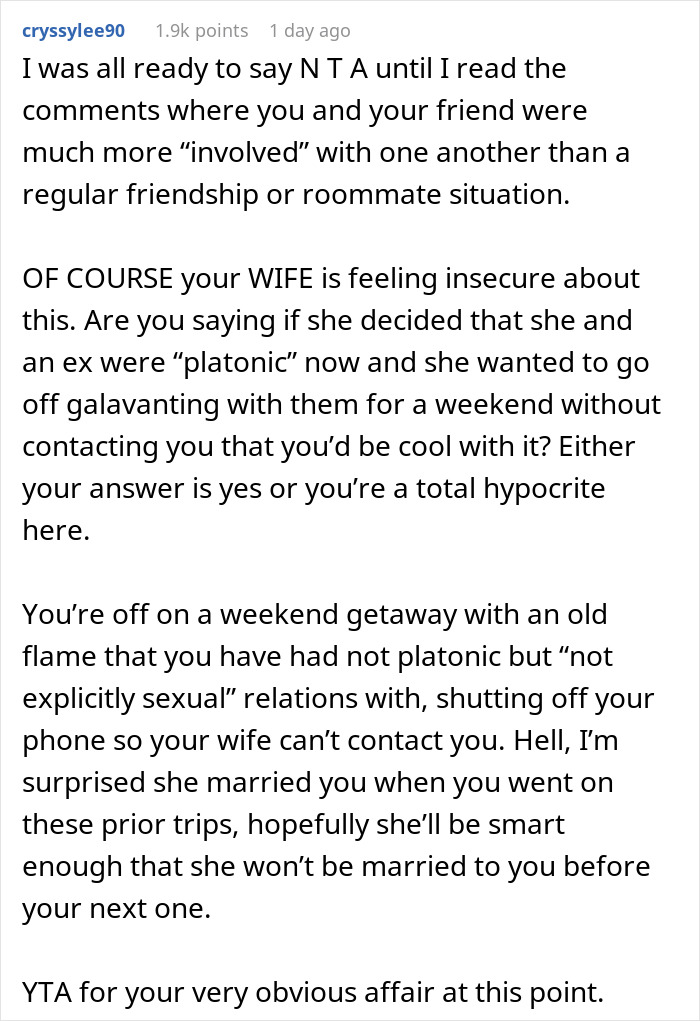 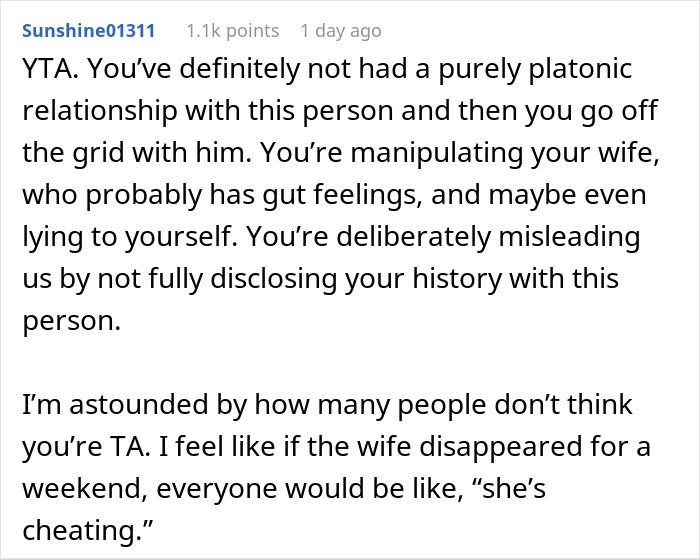 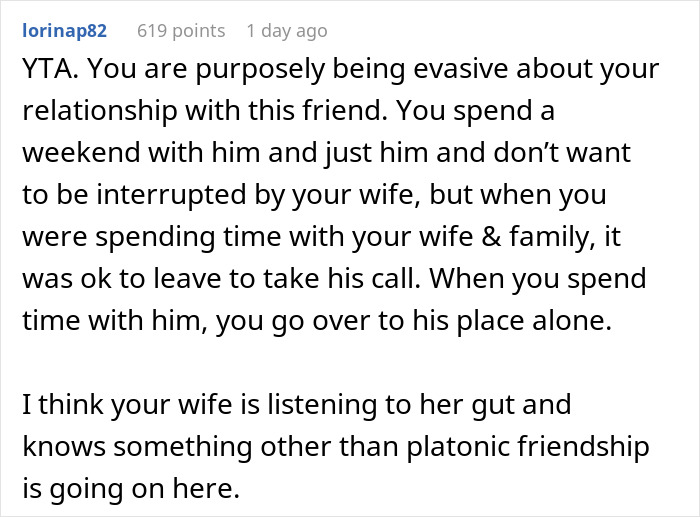 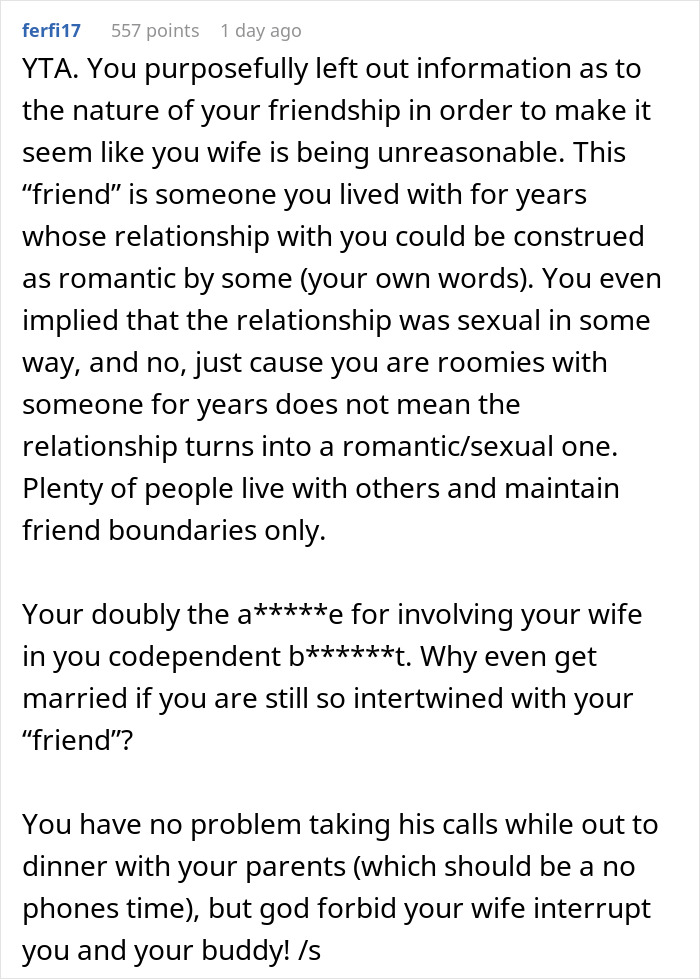 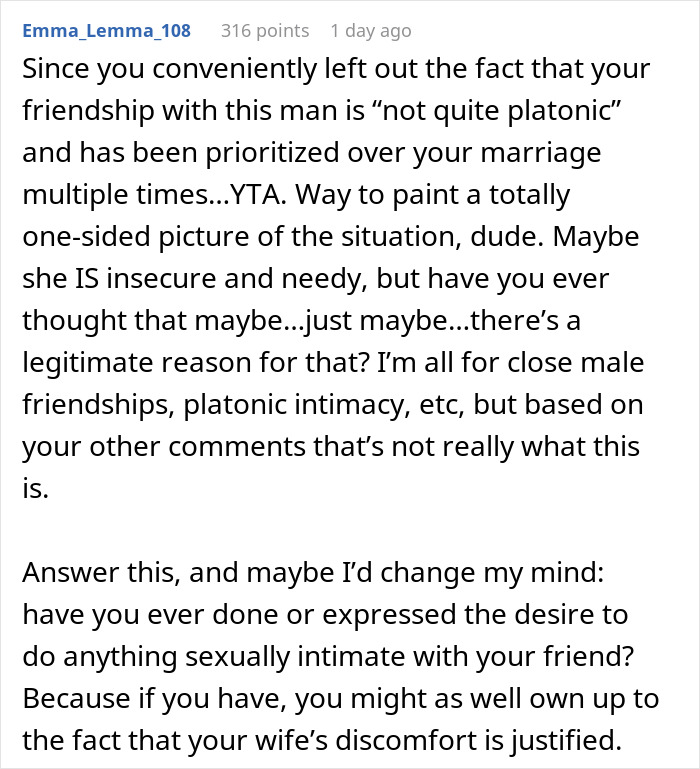 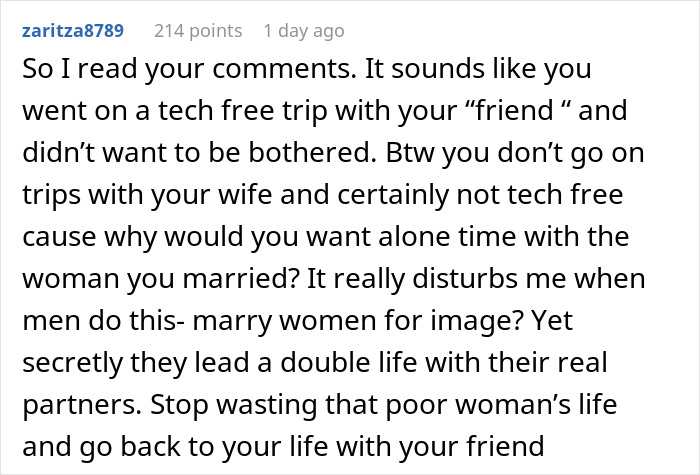 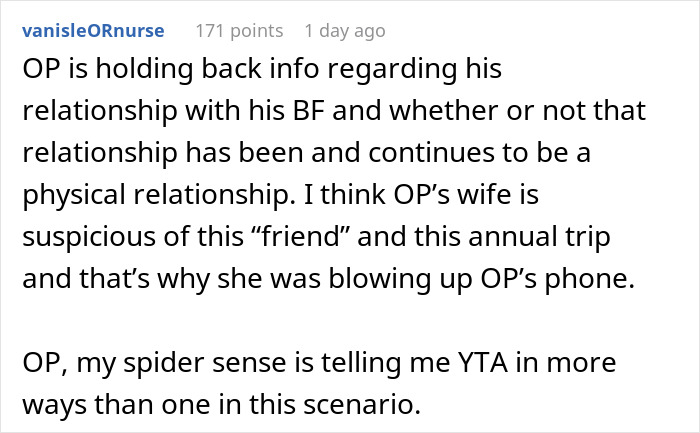 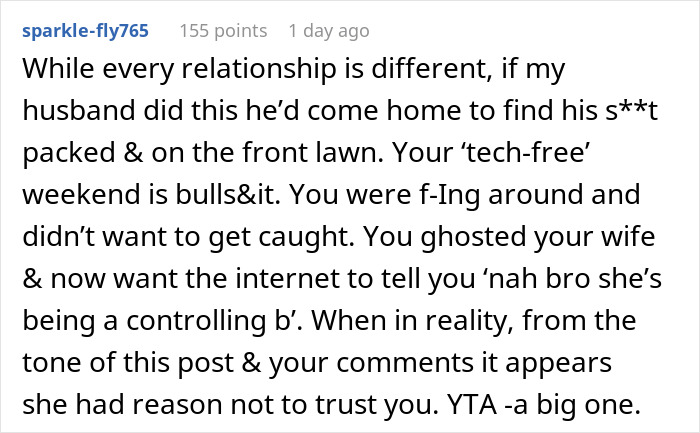 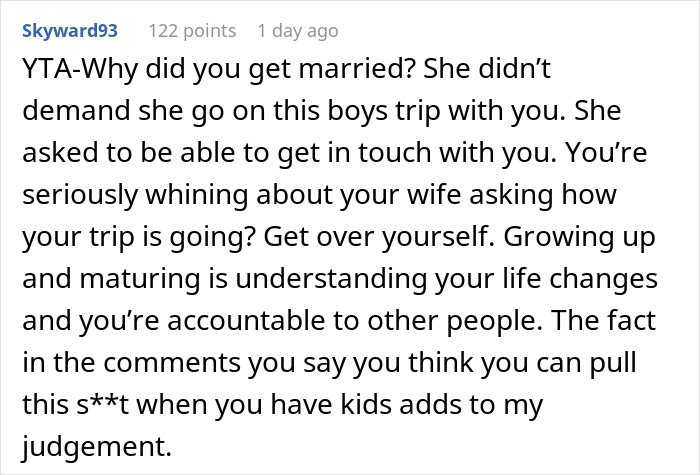 Meanwhile, others believed that pretty much everyone was to blame in this particular case 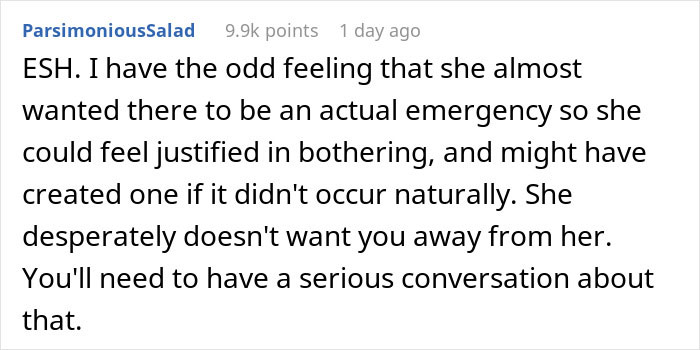 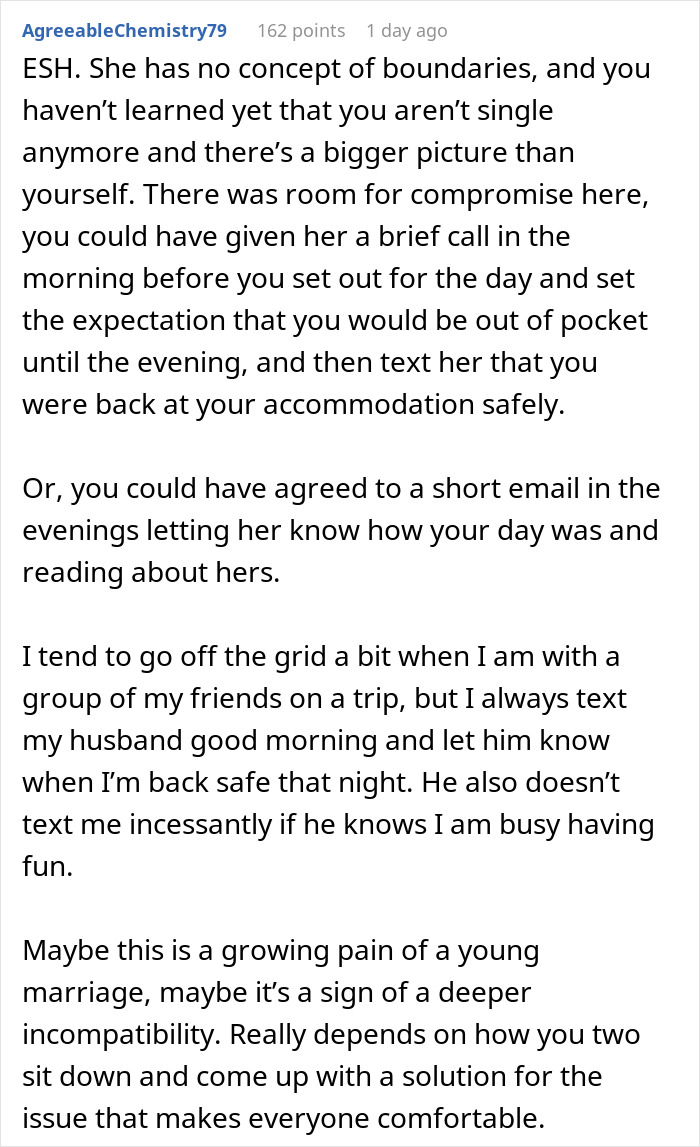 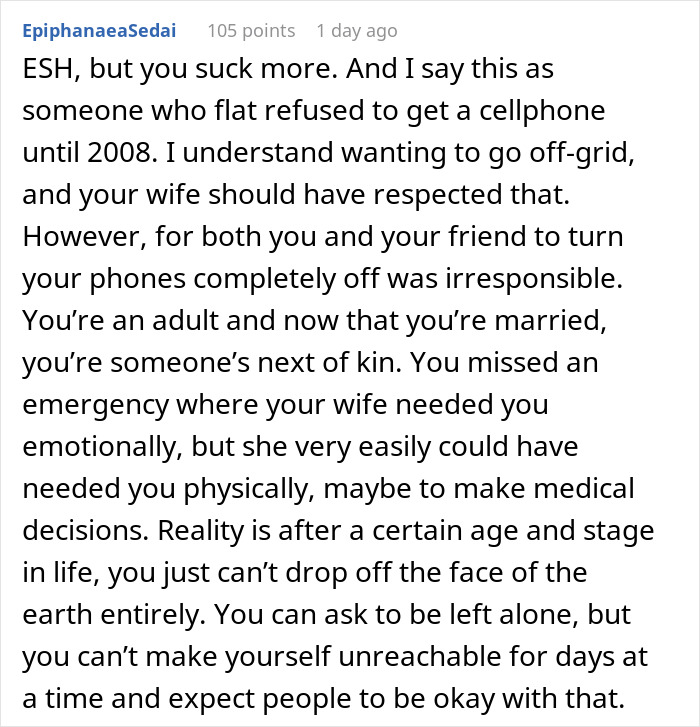 The post Husband Turns Off Phone During Tech-Free Weekend And Misses An Actual Emergency, Wonders If He Was A Jerk first appeared on Bored Panda.