One of my favorite memories from the time I interviewed Genesis Breyer P-Orridge was h/er ordering—and proceeding to eat, very delicately—a blueberry muffin. There was something wonderfully skewed in the sight of one of the most transgressive artists around doing something so pedestrian—and with distinguished English manners, too.

Another treasured memory is more recent: from last summer, during artist Kevin Beasley’s “Assembly” event series at the Kitchen in Chelsea. An offering of minimal techno music had ended on the venue’s top floor, and the audience moved down to another for a performance by the anarchic noise-music duo Wetware. P-Orridge was there for both, walking with a cane, and as s/he sat during an excoriating set full of shrieks and screams, Wetware vocalist Roxy Farman climbed into h/er lap, grinding and writhing with abandon. It was a genuinely unsettling fit of confrontation—and P-Orridge could not have seemed more pleased.

P-Orridge’s art took on many forms, all of them connected by an impulse to push past whatever bounds might make that impulse stop. Here are a few works—from sculpture and film to influential music made with h/er band Throbbing Gristle—that stand as testament to that impulse continuing over the years. 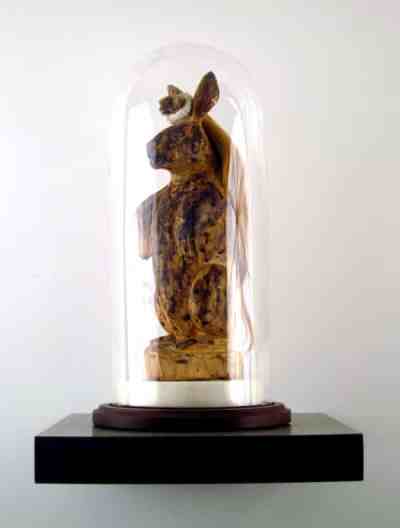 Blood Bunny (2007)
A standout sculpture in P-Orridge’s Rubin Museum show, Blood Bunny consists of a wooden rabbit figure encased in glass and covered with dark stains from blood belonging to P-Orridge and h/er partner Lady Jaye Breyer, whose blonde hair hangs from the animal’s head. The blood came from needle pricks during ritualistic use of ketamine, a drug associated with out-of-body experiences.

Throbbing Gristle, “Hamburger Lady”
Dark and grim and unforgettable, “Hamburger Lady” is a song from Throbbing Gristle’s 1978 album D.O.A.: The Third and Final Report with a horrifying conceit: lyrics chronicling care for a woman laid up in a burn unit. The words are unnerving, with P-Orridge’s voice processed with haunting electronics, and the sounds surrounding them slink around with a sense of menace that is hard to shake. (The song was included in a Rolling Stone list of “25 Songs That Are Truly Terrifying” and also served as a curious opener to the 1980 collection Throbbing Gristle’s Greatest Hits.)

Throbbing Gristle, Journey Through a Body
Journey Through a Body was created as a work of radio art for Italian national radio in 1981, and it counted as Throbbing Gristle’s final studio recording before the band regrouped for a bit decades later. Again, the effect of listening can be horrifying—with hospital noise drifting around synthesizer sounds and intonations about sex and violence. But “Oltre La Morte” ends it all in the form of a stirring piano ballad that can make a heart swell.

Synesthesia: Genesis P-Orridge by Tony Oursler
Artist Tony Oursler featured P-Orridge among 11 other musical luminaries in a series of video interviews between 1997 and 2001, and P-Orridge’s offers 90 minutes of remembrance of h/er upbringing and musings on art and artists that served as influences. At one point s/he speaks of inciting a riot with toilets being thrown as weapons. 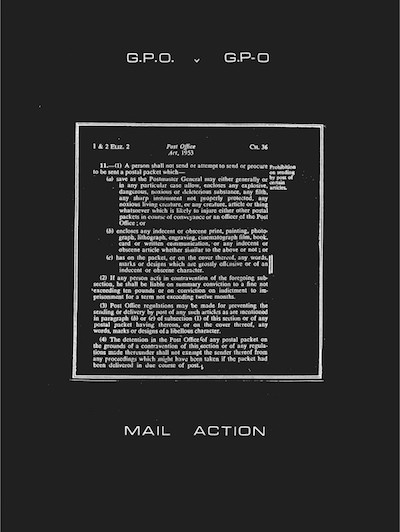 G.P.O. Versus G.P-O: A Chronicle of Mail Art on Trial
Published in a facsimile edition by Primary Information, G.P.O. Versus G.P-O is an early art-book collection of correspondence, documents, and ephemera relating to prosecution against P-Orridge and h/er group COUM Transmissions for sending pornographic collages through the postal service in England in the 1970s. In acknowledgements at the start, P-Orridge wrote (in h/er idiosyncratic style): “E want to say too that often E work in a way coumwhat disparaging of thee Art World. Yet, when E went to all my friends in that world as well as just friends in life, not one person refused to help me.”

The Ballad of Genesis and Lady Jaye
This 2011 documentary by Mary Losier tells the story of P-Orridge and h/er partner Lady Jaye, who together ventured into activities to assume the status of the pandrogyne—a genderless state of being in which the two would effectively fuse into one. It would be hard to think of a more evident case of art and life combining, and it’s a touching love story as well. In the end—on top of all the darkness and complications that came to make up h/er legacy—P-Orridge had a capacity for sweetness too.