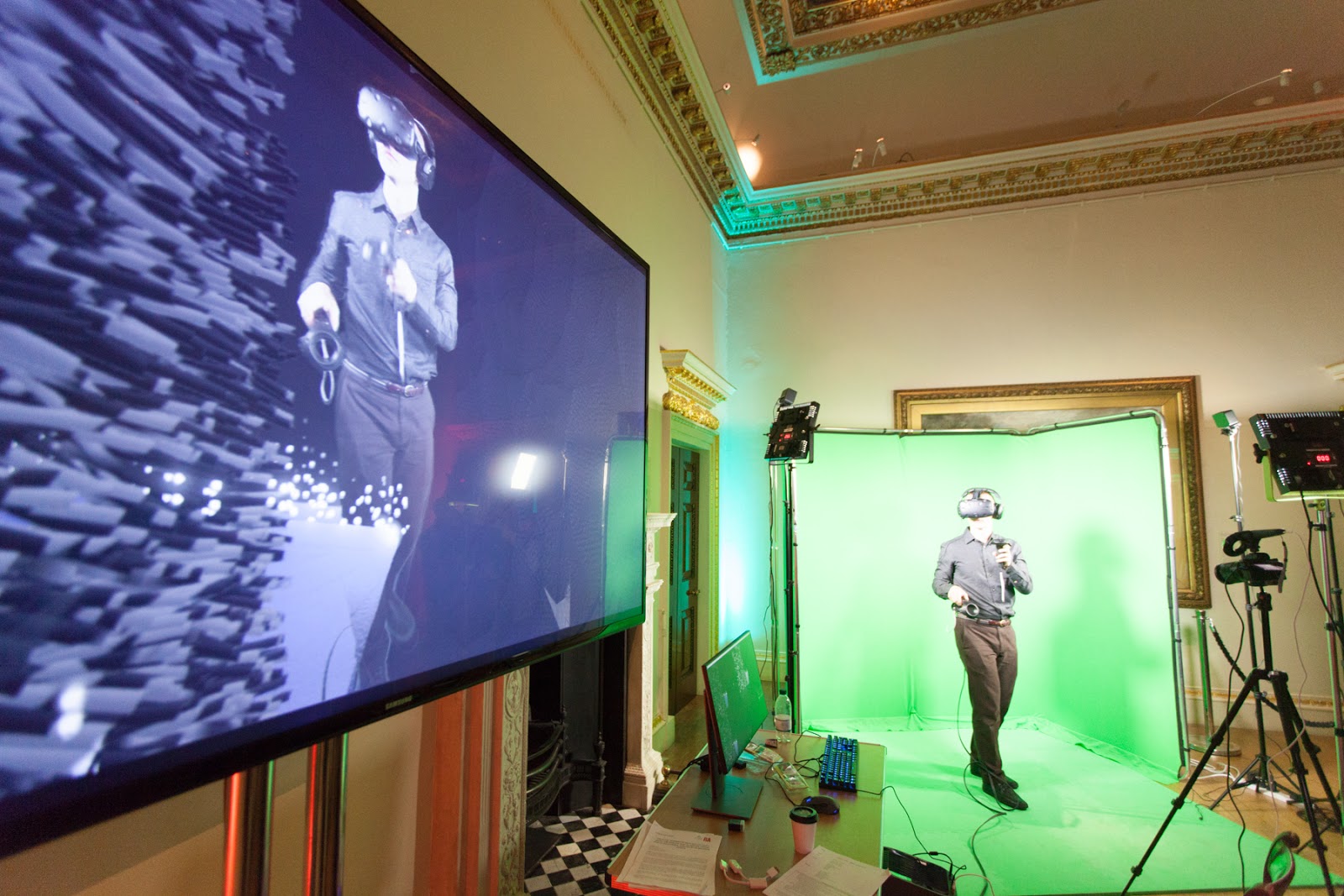 My friendly virtual reality guide—a smiling lady in an HTC Vive t-shirt who told me she handled PR for VR—helped put on my gear. Once kitted out in headset and headphone, with controllers in either hand, I entered the world of Virtually Real, a popup exhibit at The Royal Academy of Arts. We were in a lushly-appointed room decked out in 19th-century portraits, a pleasant contrast to the VR stations where I and a handful of other headset-wearers stumbled about. Here past met future: At this 249-year-old institution, home of Britain’s oldest art school, I was going to interact with some very new art in very new ways; first, in virtual reality, and then as 3D-printed sculptures ripped from the VR designs. 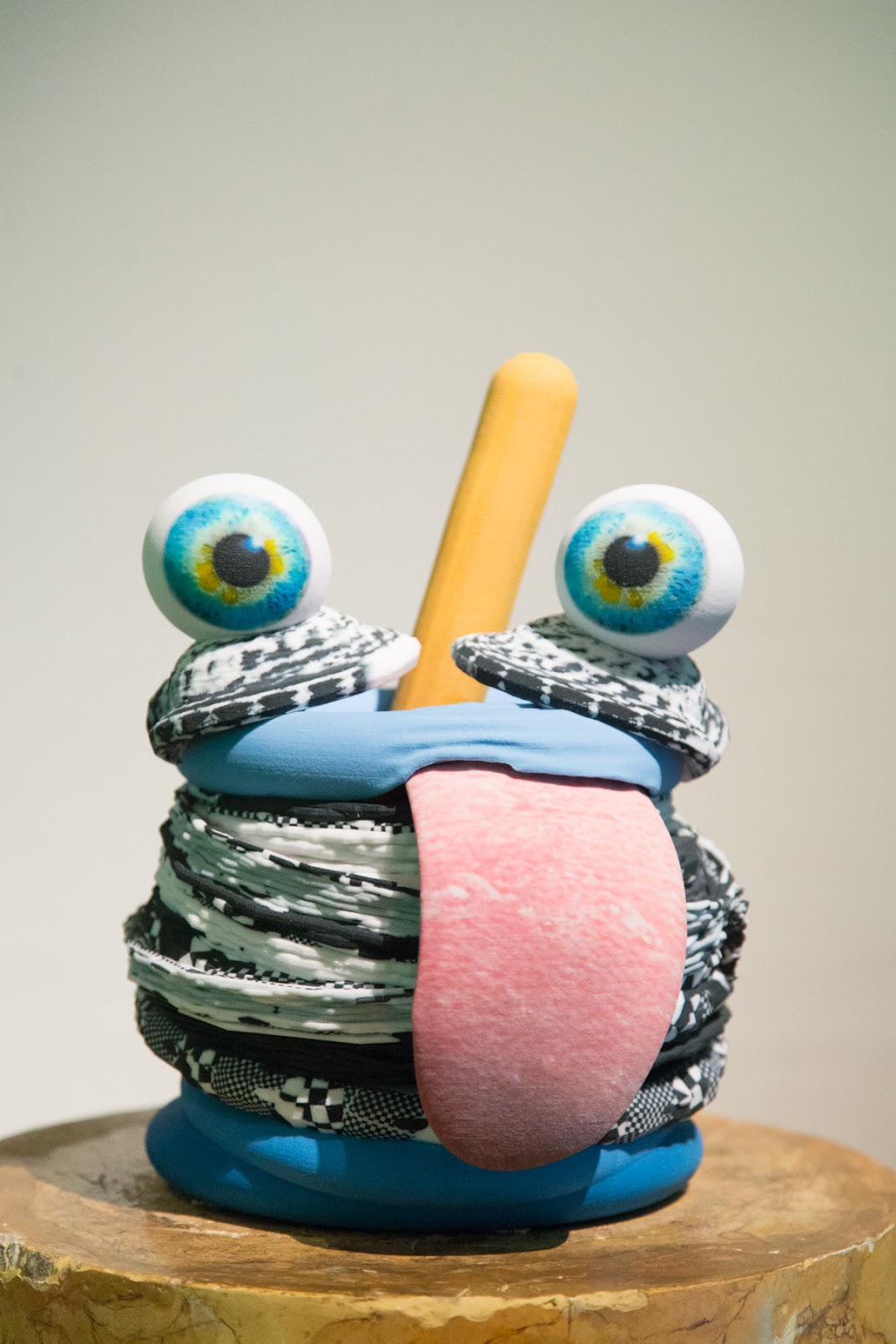 The first VR universe I entered was 2016 RA-graduate Elliott Dodd’s Whippy Snaggle Stack. Dodd’s work often features portraits of googly-eyed, lolling-tongued creatures with cutesy names out of some sort of demented children’s TV programming, and “Snaggle Stack” is very much in this vein. In his VR world, the statue is a towering monolith, scores of stories high, almost sublime in its ludicrousness and monumental proportions. By clicking a footstep-shaped icon I drew nearer and nearer to the titan, until I was actually inside it, peering up through the loosely concentric tires that formed its body. In the next room, a very different version of “Whippy Snaggle Stack” sits on a podium. The 3D-printed rendering appears to be less than a foot high, and is arresting but not terribly engrossing. The impossible scale of the VR sculpture makes the work wondrous; its diminished incarnation is, well, diminished. 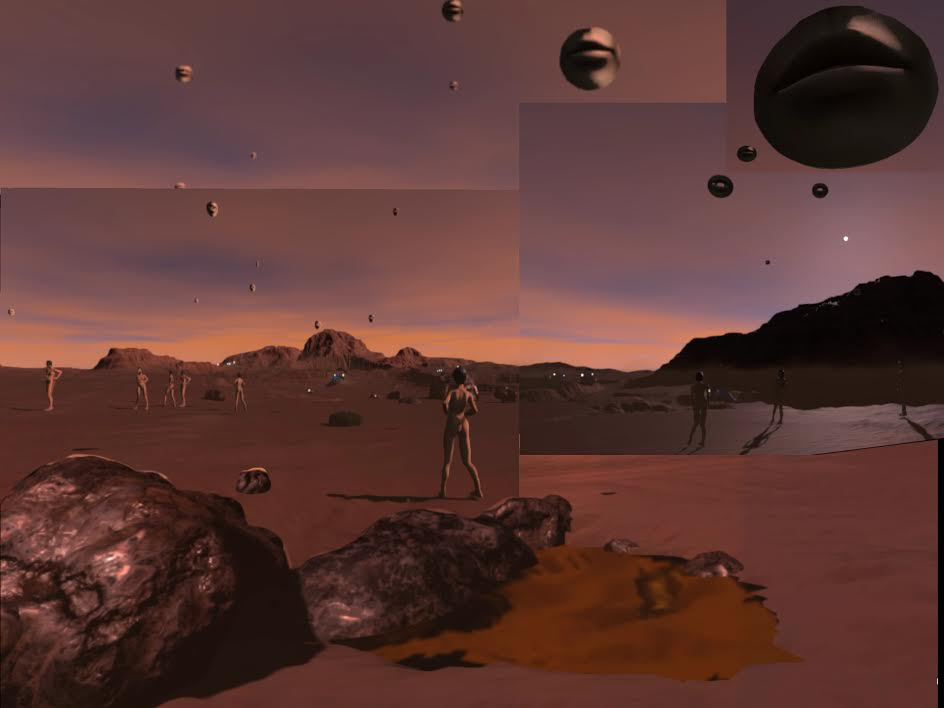 Collage of images from inside Low Winter Sun, the virtual environment by Jessy Jetpacks. Image courtesy the artist

The next VR universe I’m transported to is Jessy Jetpack’s “Low Winter Sun,” a desert Mars landscape dotted with mouth-shaped stones and filled with lumbering, mammoth space bugs scuttling like herds of elephants. Naked female figures jerk in a writhing dance to a chilled-out electronic track composed and performed by Jetpacks herself. “You cannot have my work without the audio,” Jetpack tells me via email. “At times it is like a fully immersive music video.” It is the most immersive of the three works, and while in it I totally forgot that I was actually in a fancy portrait gallery strapped to the heavens with high-tech hardware. The printed sculpture from her work—one of the massive insect-like creatures—is again somewhat less vital than the VR experience. Sure, it’s “real,” but it’s motionless, stripped of context. 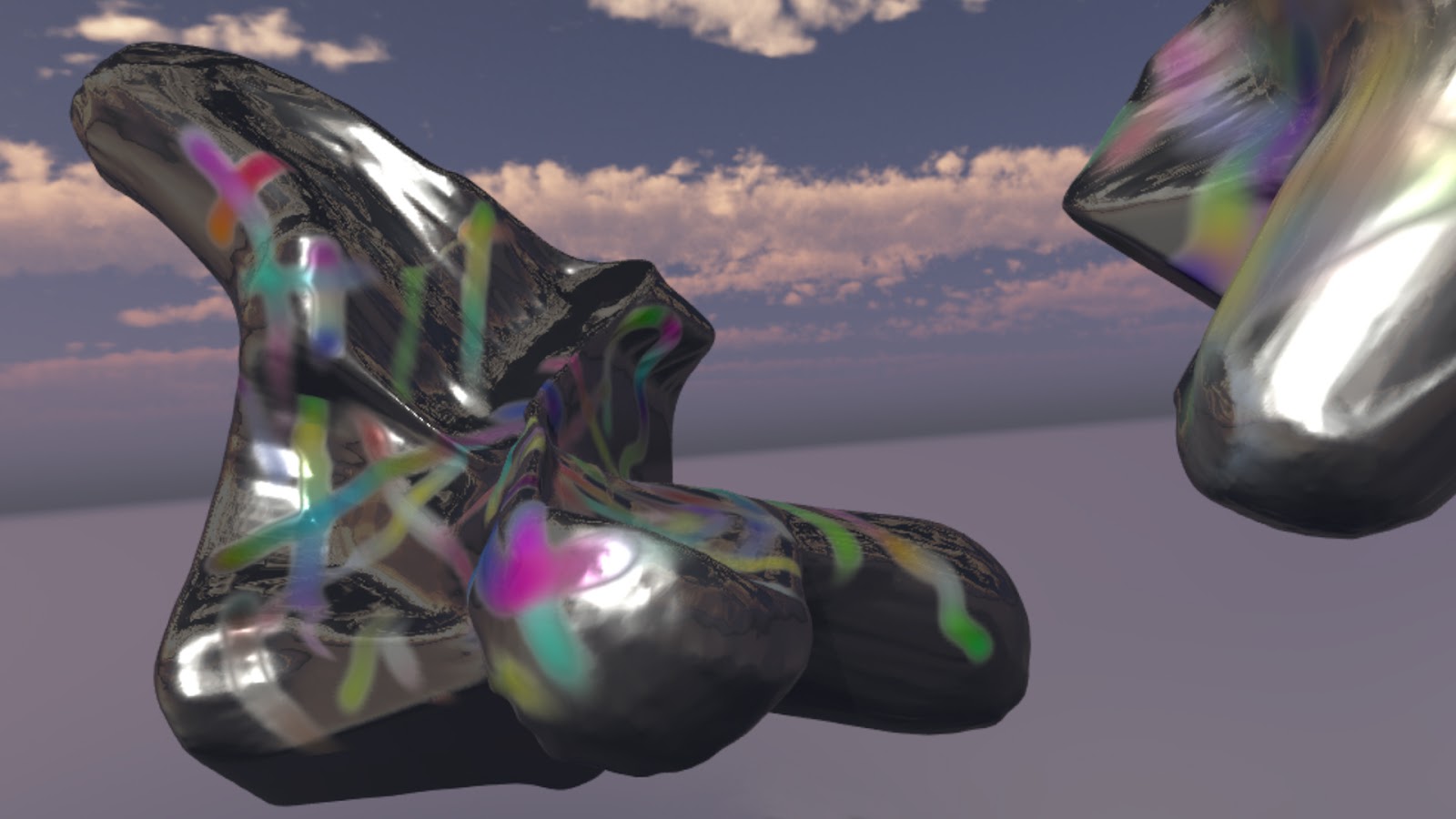 Image from Floating, spray can in hand, by Adham Faramawy. Image courtesy of the artist

The third universe is Floating, spray can in hand, by RA alum Adham Faramawy. His world is the simplest but most interactive; grey statues resembling huge, twisted lumps of clay float in a cloudy dawn sky, and the visitor’s job is to spray paint them with their VR controller. The colors take care of themselves, emerging in rainbow swirls. It’s a beautiful and oddly meditative work. The largest of these sculptures sits in the next room, augmented by a TV screen that emerges from its side. This is the most effective of the 3D-printed works, as the relationship between it and its VR counterpart is neither parasitic nor at all contentious 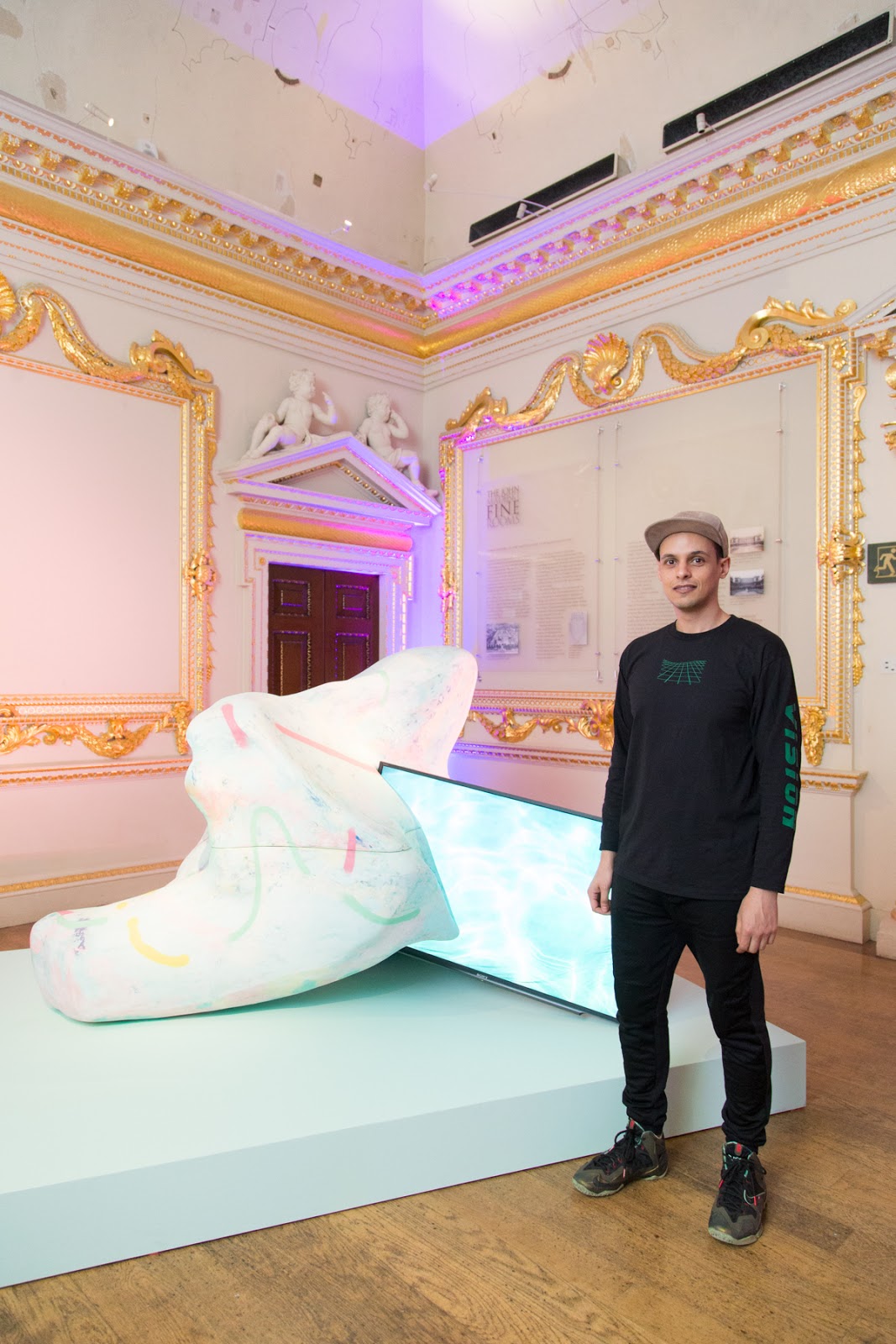 “It’s been a fun but steep learning curve!” says Faramawy of creating his installation. “There’ve been a lot of challenges. It’s a fairly new technology and the tools have been shifting and developing almost on a weekly basis.” 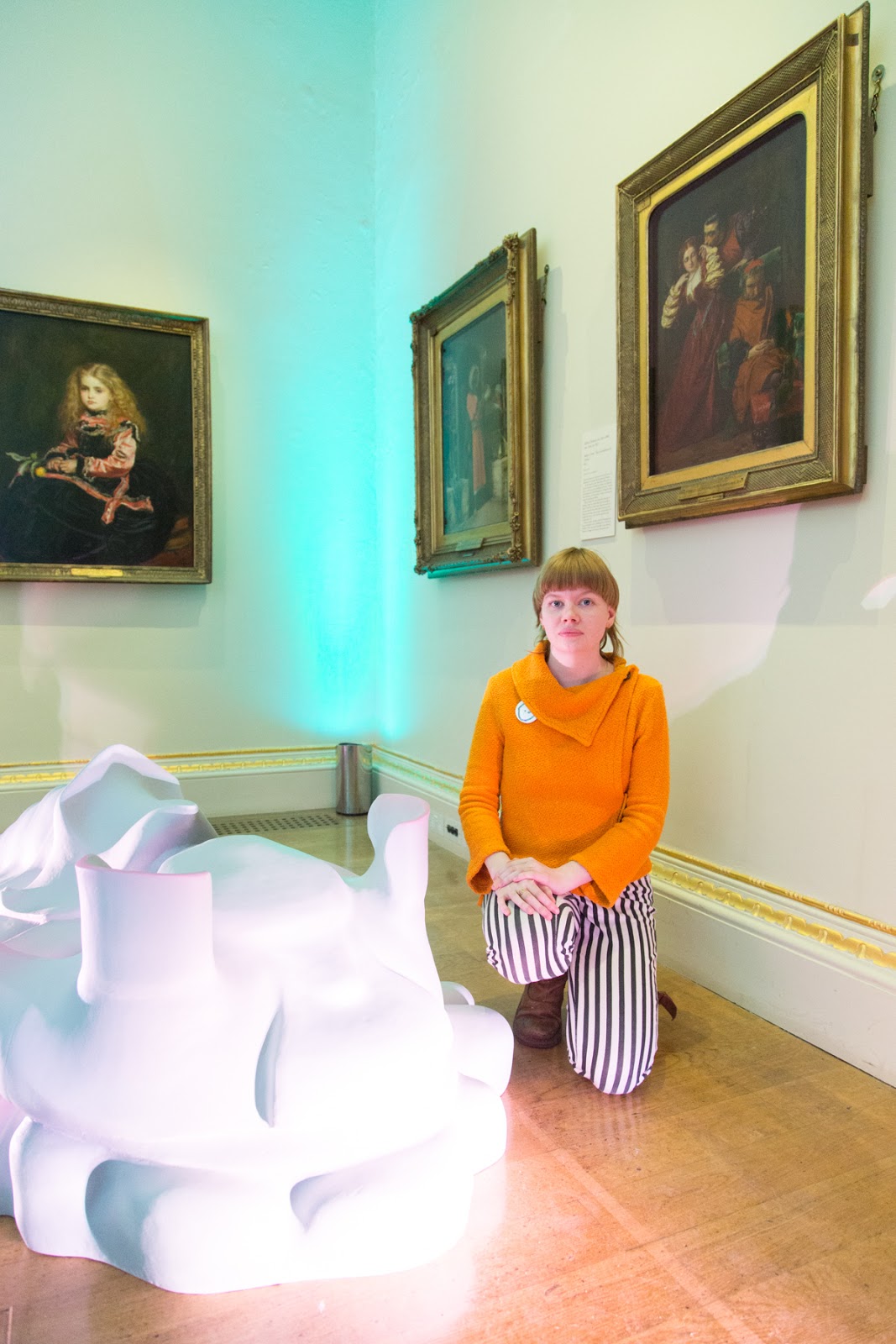 Finally, my VR tour guide told me it was time for me to draw a work of my own in Vive, using Google’s Tilt Brush technology. I spent an entertaining few minutes experimenting with the vast textures and color palette, playing around in what felt like a futuristic version of Microsoft Paint. 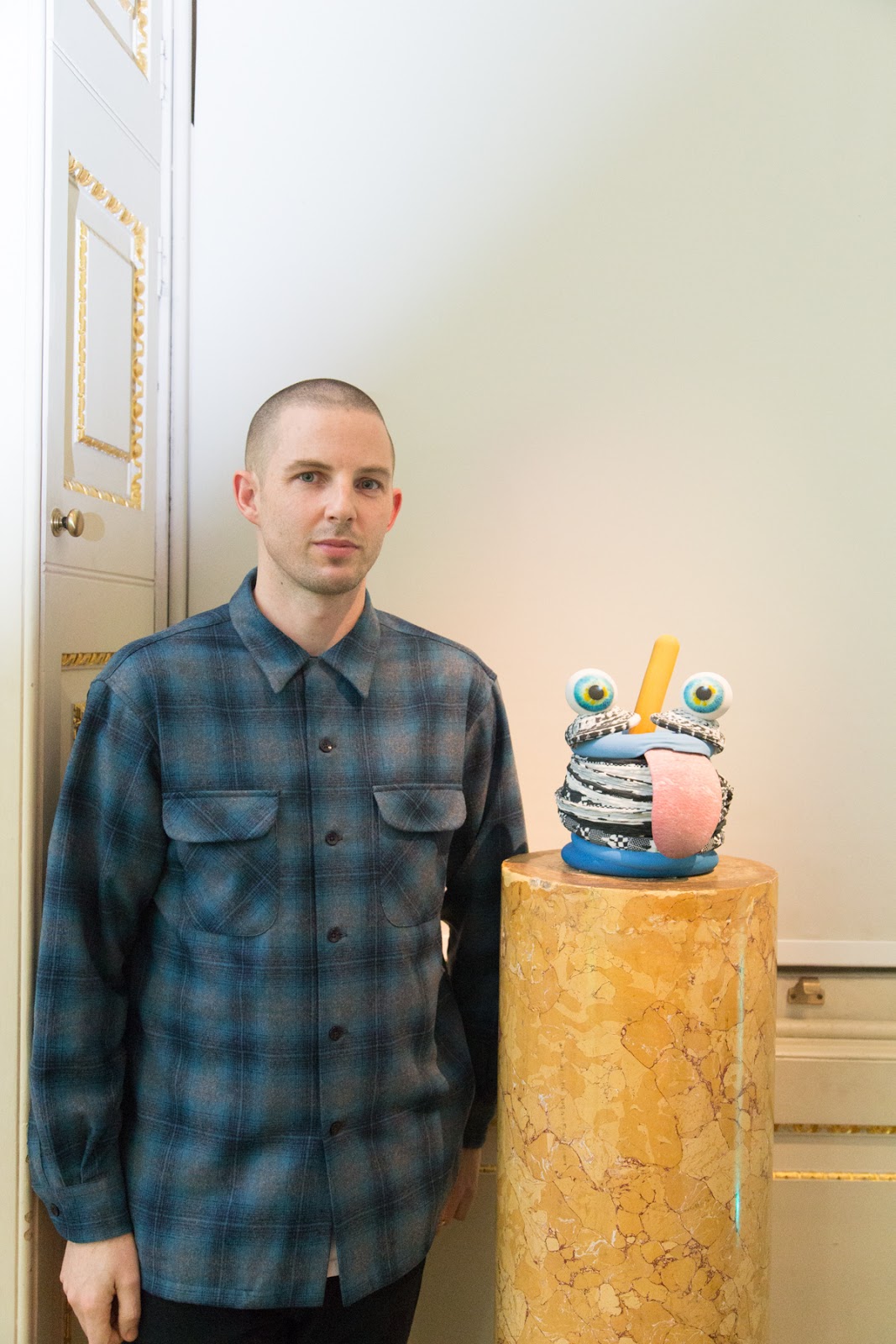 The Vive-pimping (and the exhibit’s £45 ticket price) left a vaguely icky corporate taste in my mouth. But The Royal Academy of Arts is a charity, and its students all receive a top-of-the-line no-cost education, so I’m very much in favor of them getting that cash. The VR works, however, taken with with their real-world counterparts, project a much more straightforward message: Reality is overrated.

Virtually Real took place from January 12 – 14 at the Royal Academy of the Arts. Click here for more information.

This New London Exhibition Is an IRL Instagram Feed