The tech industry is infamous for being shrouded in secrets. Non-disclosure agreements and confidentiality forms seem to be handed out by tech companies like candy, but how far are they legally allowed to go with limiting their employees’ speech? One woman in Denver, Colorado, who recently landed a new job in the tech industry received a rude awakening when she learned that even sharing her salary online could ruffle a few feathers.

TikToker Lexi Larson shared a video earlier this week explaining how her online presence got her fired from her new job. Below, you can hear the full story from Lexi and read some of the responses her video has received. Let us know in the comments if you think her employer had any justification for dismissing her, and then if you’re looking to read another Bored Panda piece touching on salary transparency, check out this story next.

After only two weeks at her new tech job, TikToker Lexi Larson posted a video detailing how she was fired for sharing content online 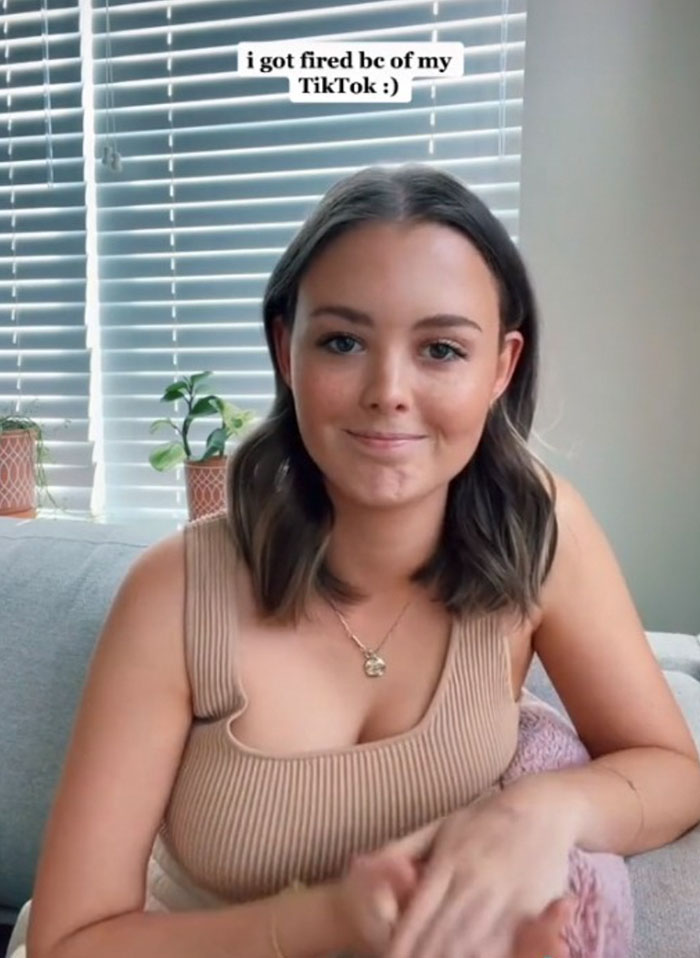 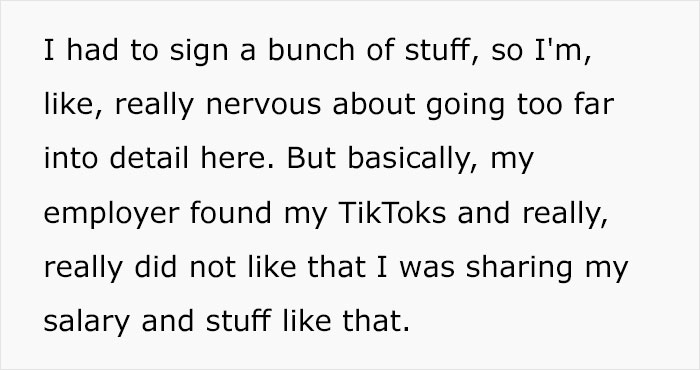 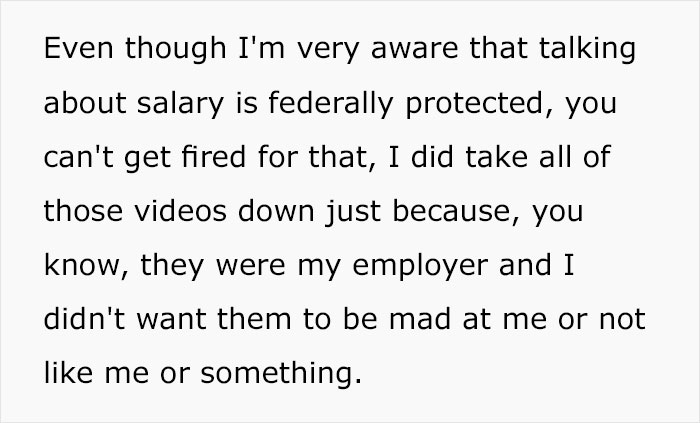 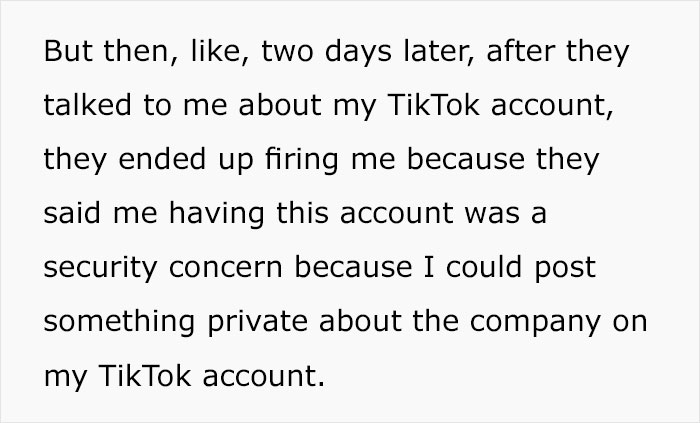 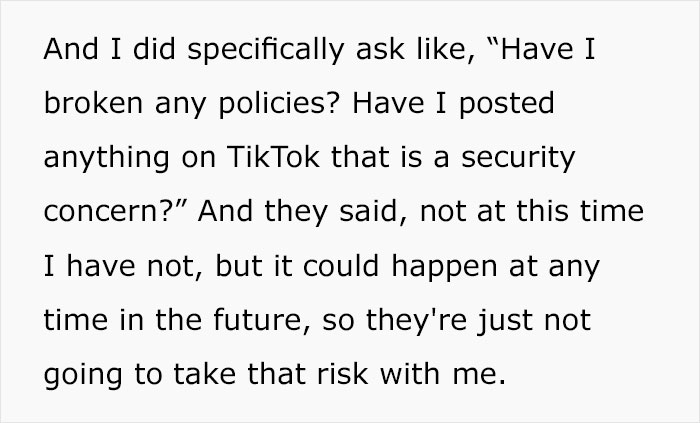 Lexi explained that she never violated any company policies, but her employer was upset about her salary information being online and considered her TikTok a “security concern” 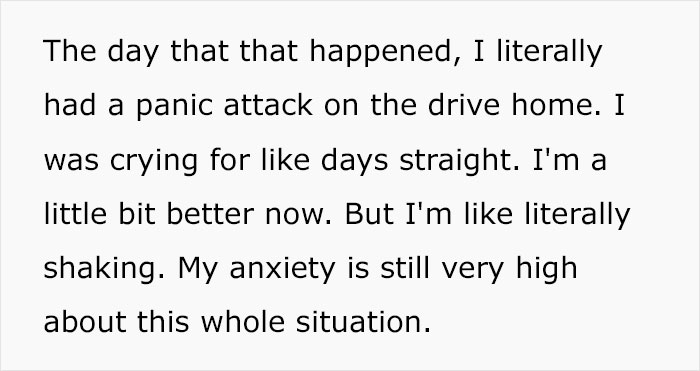 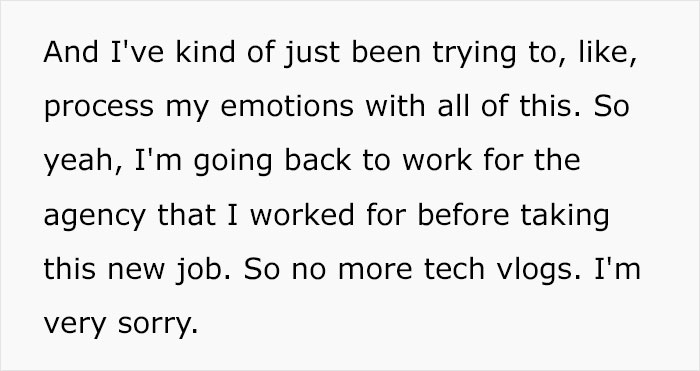 You can hear Lexi tell the story right here

@itslexilarson I got fired bc of my tiktok

We have all been warned about the implications of posting too much information on the internet. It stays out there forever, everything can be screenshotted, and we might regret sharing anything too personal. But companies almost always have policies in place designating specifically what cannot be posted, so employees do not have to play a guessing game about what they are allowed to reveal. Having defined parameters makes everyone’s life easier. In this case, Lexi explained that she asked her employers if she had broken any policies or posted anything that was a security concern, and they responded that she had not. Fear that an employee might violate a policy sometime in the hypothetical future is not a valid reason to terminate their contract.

Furthermore, Lexi noted that sharing her salary online was one of the main reasons her employer was upset. However, in the United States, individuals have the right to openly discuss their wages, at work and in other places, without being retaliated against by their employers. This right is protected by the National Labor Relations Act, and even notes that when it comes to communications like social media, employers enacting “policies that specifically prohibit the discussion of wages are unlawful”.

In a follow-up video, Lexi said that she has no plans to seek legal action against the company, but many commenters said that if she wanted to sue, she might have a case. Even if this is the end of Lexi’s saga with that company, hopefully she has opened their eyes by posting about how they wrongfully treated her. Companies should not be allowed to get away with firing employees for having social media accounts, so hopefully this discussion will help prevent future unjust terminations. Let us know in the comments how you feel about this situation or if you have ever been in a similar situation with your employer.

Commenters have responded with outrage for the situation, telling Lexi that her termination was unfair and that she should consult a lawyer

The post “I Got Fired Because Of My TikTok”: Woman Shares Her Salary On TikTok And Her Employers Are Not Happy About It first appeared on Bored Panda.