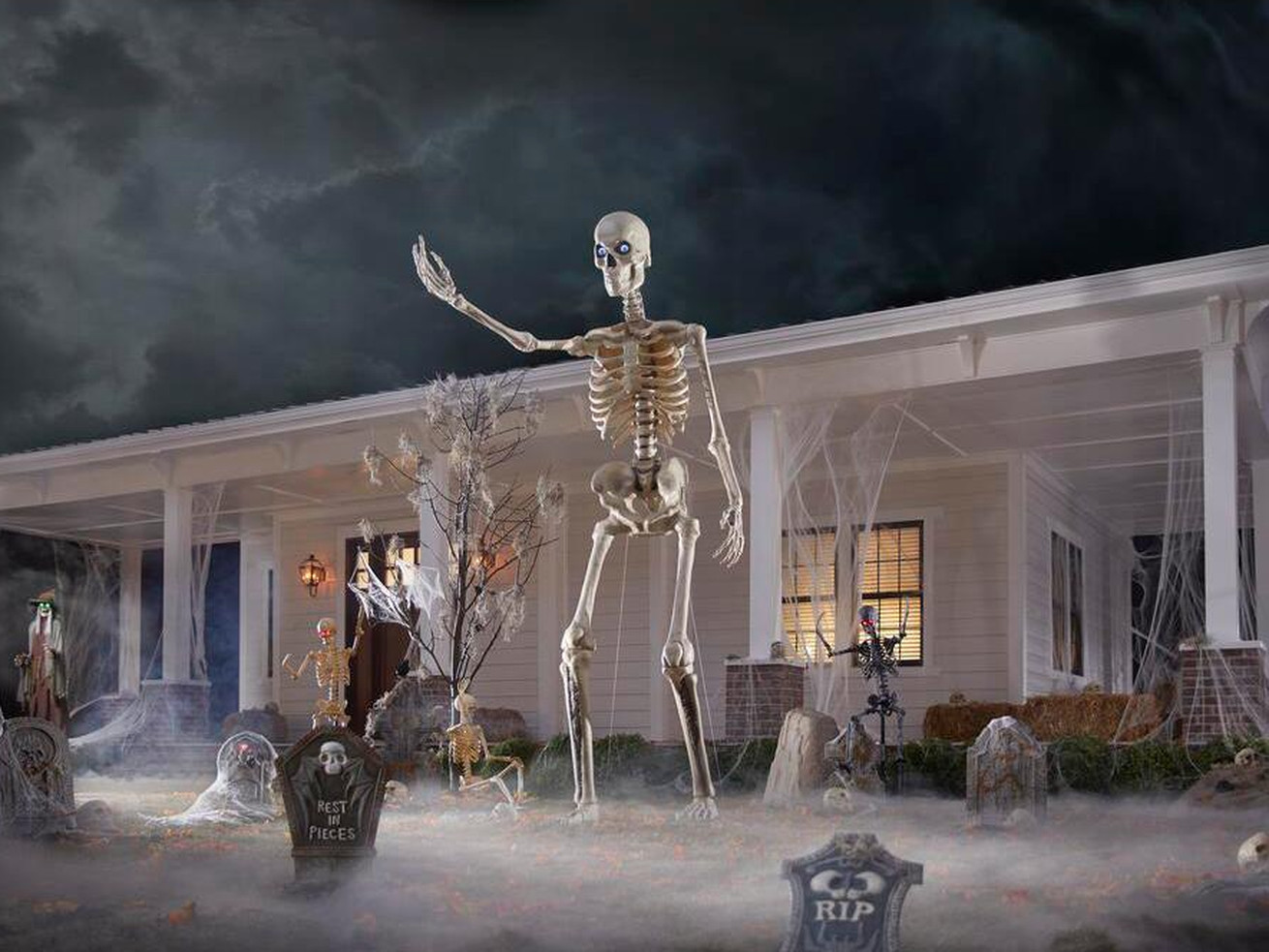 ALL HAIL THE 12-FOOT GIANT-SIZED SKELETON WITH LIFEEYES

There is no autumn, there is no fall. Those are antiquated terms from a bygone era. Now, there is only Spooky Season. And each year Spooky Season brings with it bigger, better, more outrageous decorations and costumes. One of last year’s finest offerings to appease and give thanks to the pumpkin gods was a 9-foot-tall inflatable squid costume, which seemed pretty difficult to top. Difficult, but not impossible, apparently, because it has decidedly been topped.

Look at this thing. Really look at it. Take your time with it.

Is there any sensible argument to be made for dropping $299 plus tax on a 12-foot-tall lawn ornament? No. But does this look like a guy who gives a shit about your “reason” and “fiscal responsibility”? Again, no. Fuck no. It’s called the 12-Foot Giant-Sized Skeleton. Its name already says how giant it is but it says Giant again just to really send the point home, and to make it clear that you — I — don’t mean shit. It doesn’t need your justification, it transcends it. We’re lucky if we get the chance to stand in its presence.

Those other decorations should be embarrassed. They should pack themselves back up in their dumb regular-sized Rubbermaid bins and chuck themselves back into the attic like the fools they are. That house in the picture is worth, what, probably a cool $900,000 and change? Doesn’t matter. It might as well be a shack, the 12-Foot Giant-Sized Skeleton with LifeEyes is the most valuable thing on that lot now.

You’re probably wondering, “what are LifeEyes?” Oh, oh I’ll show you what LifeEyes are. I got your LifeEyes right here, pal.

These LCD eyes are powered with four C batteries and the screams of innocents.

They are somehow both flat like a character from the deeply cursed late-nineties series Cyberchase yet endless with intensity of a black hole, mysterious and terrifyingly awesome like the First Testament God. I guarantee if you stared into the 12-Foot Giant-Sized Skeleton’s LifeEyes for long enough you’d be able to see your own death.

In the description on Home Depot’s product page it says it’s “designed for indoor or outdoor use”. Look, you’re free to make your own choices, but if you put this thing inside your house? Congratulations, that’s not your house anymore. It’s your new giant skeletal overlord’s house now.

Need more information? Well, if the name 12-Foot Giant-Sized Skeleton with LifeEyes is somehow not clear enough for you, Home Depot does also say what theme this decoration falls into — Skeleton. Yeah, idiot, Skeleton is an entire theme now. Don’t ask questions.

Listen, I don’t know the full ramifications of erecting the 12-Foot Giant-Sized Skeleton with LifeEyes and staking it on your lawn, I don’t know what kind of Pandora’s box that’ll open. All I know is it deserves to be feared and respected, and it doesn’t come with batteries.