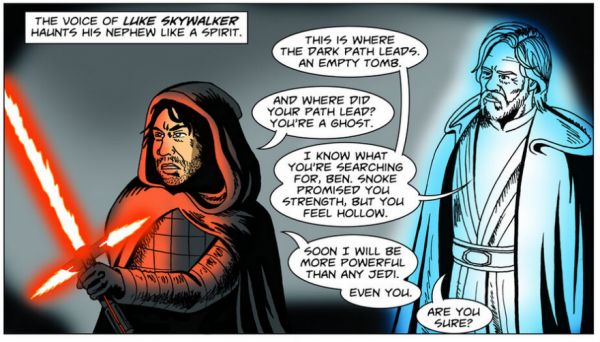 The rejected script for episode nine of the Skywalker saga, written by Colin Trevorrow and Derek Connolly, leaked online a year ago. It was an intriguing story, especially considering how poorly the script that replaced it was received. Star Wars fans read it and imagined what might have been if Disney hadn’t fired Trevorrow and enlisted JJ Abrams to do the last film. Imagine a Star Wars universe in which Palpatine is dead, Leia is not, and Luke’s Force ghost haunts Kylo Ren.

Hey, Star Wars fans. I’ve been working the past year on a comic book adaptation of Colin Trevorrow’s Star Wars Episode IX script “Duel of the Fates” and I’d like you to check it out! (It will be 7 issues total when completed.)
Hope you enjoy it!https://t.co/XfrNX5wHvQpic.twitter.com/2Ay070L9oS

And now Andrew Winegarner has taken that script and rendered it in webcomic form! Read Duel of the Fates online, at least in part. It’s a work in progress, which explains why only part of it is in color. Bookmark the link so you can read the whole thing as it is drawn. -via Boing Boing