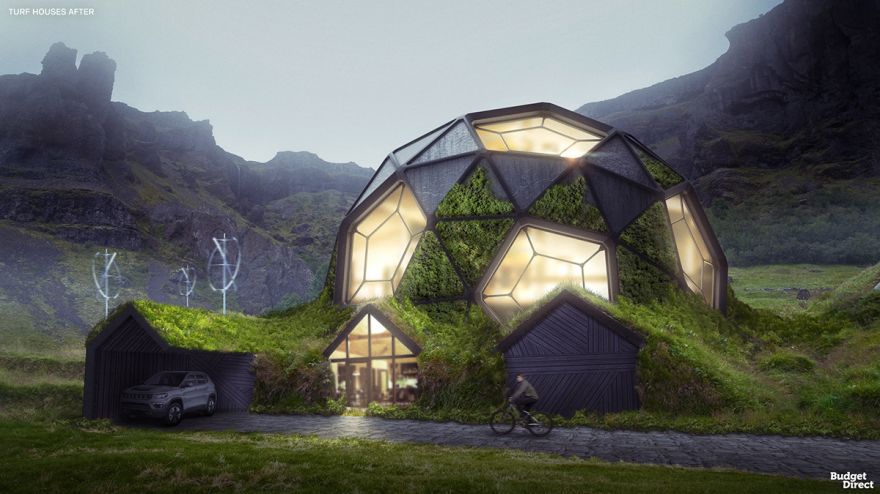 From ancient Egyptian mudbrick homes to the iconic turf houses of Iceland, humans have proven there is more than one way to build a house.

Today, those ancient homes are nothing but ruins, but what if they were built using today’s building knowledge and techniques?

We used 21st century home building and architecture trends to renovate 6 ancient houses from around the world.

An Icelandic turf house consists of a wooden frame stuffed with blocks of turf (grass still embedded in the earth) on a stone foundation. Only the front around the doorway is bared. The entrance leads to a big hall (sometimes via an antechamber) with a firepit in the middle.

Our renovated turf house complex plays with the ‘badly hidden’ appearance of traditional turf houses, which seem to sink back into the landscape. The steel-frame dome looks partly natural yet completely alien. Panels of turf and timber alternate with glass windows, using reflections to create an improbable, angular mound of grass, wood, and… clouds! In a subtler touch, the wooden planks that form the facades have been rearranged at decorative angles.

Three thousand years ago, most Egyptian people lived in houses made of mudbrick. In fact, the word for a mudbrick, ‘adobe’, comes from the ancient Egyptian word, “dbe.” There was very little wood available in ancient Egypt, but when the Nile flooded, it was practical to make bricks from the resultant mud combined with straw. Entire families would occupy a single room, although in hot weather they might sleep on the roof.

The narrow windows of the original buildings were designed to keep the mudbrick houses cool. Our updated version features prism-like extensions made of clean-cut limestone, which is ideal for blocking heat from the outside. Our architects wanted to create a visual clash by placing futuristic forms atop historic ruins – the slit windows and slanted roofs add that dynamic, modern look.

Traditional pueblo houses were constructed from adobe bricks or limestone blocks. They had as many as five stories, each set back from the floor below to create a pyramid-type shape. The walls were very thick and, with multiple families in each building, there wasn’t much space.

Our architects have created more room to live while maintaining the social feel of the pueblos. New semi-open terraces feature glazed prisms for social gatherings, offering epic ‘observatory deck’ views over the plains of America’s south-west. The prisms are augmented with photovoltaic glass panels on the facades so that these modernized homes can run on renewable energy.

Chinese Siheyuan date back to the Western Zhou Period (1045–770 BC). A typical siheyuan is symmetrical and features four buildings around a quadrangular courtyard. These home complexes were built according to strict height, design, colour, and decoration restrictions, depending on the status of the owner.

As such, our updated siheyuan boasts an overdue cosmetic makeover. New columns and facades feature angular surfaces, creating a clean-cut, stoic, yet kinetic vibe. The beautiful original roofs have been kept mostly intact, but the addition of solar panels adds a welcome touch of sustainability. Finally, the courtyard has been treated to new grass and pebble areas useful for meditation and play.

Incan architecture is renowned for precise and sophisticated use of stone blocks. However, more humble Incan homes would often be built from unworked field stones or even adobe bricks. Roofs were sloped and usually made of thatched grass or reeds on a wood or cane frame.

The settlement we chose to renovate boasts a particularly exhilarating view. We wanted to amplify the strangeness of the arrangement and create more space. We did so by designing wedge-shaped volumes of black concrete and glass that seem like prisms penetrating the roofs. The centrepiece is an infinity pool suspended from the top property, creating an unparalleled mountain view experience.

Villa architecture in ancient Rome was very diverse in design. But as a general rule an entrance door in the middle of the façade would open up into a corridor leading to a courtyard. This would be the heart of life in the Roman home. Corinthian style columns or pilasters hung with retractable doors separated the courtyard from the surrounding rooms.

How do you extend an enclosed courtyard? We’ve dug down to create a second level. An island hot tub and lawn add recreational options. They are reached by a glass bridge that allows light to reach the extra guest rooms around the new, lower courtyard. Solar brick roofs power the complex, while a greenhouse on top provides homegrown fruits and vegetables for the residents.