The Comedy Pet Photo Awards 2021, which featured some of the funniest and most amazing pet photos, have finally announced their winners of the year, and we couldn’t be more delighted to see the results.

The 2021 Overall Winner award was won by a photo titled “Whizz Pop” by Zoe Ross, who captured her puppy, Pepper, playing around. Here’s what Zoe shared in a press release interview: “We never ever thought that we would win but entered the competition because we loved the idea of helping a charity just by sending in a funny photo of Pepper. She is such a little monkey, and very proud of herself, bringing in items from the garden and parading past you until you notice her. She is the happiest puppy we’ve ever known and completely loved to pieces.”

Pepper, now 7 months old, was initially introduced as a play buddy for the family’s other dog, Dolby, to help with her separation anxiety. “She’s been a wonderful addition to the family, providing lots of extra love and entertainment for all of us, especially Dolby—they are inseparable.” said Zoe.

If you’d like to see the first part of the contest on Bored Panda featuring more pictures then we suggest you click here.

“Whizz Pop” By Zoe Ross. “Playing with bubbles in the garden. I think I may have swallowed one.” 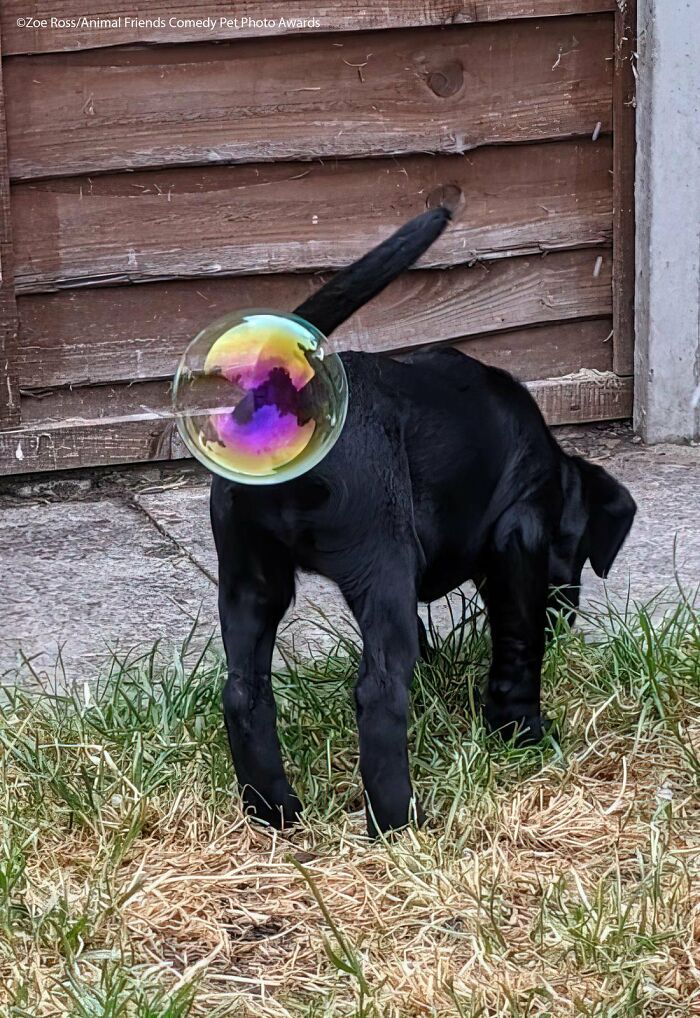 Bored Panda reached out to Tom who is one of the co-founders of the competition, with some questions. First, we asked Tom about how they chose the final winner for the photography contest.

“The images are considered by a wide variety of judges, including pet lovers, animal welfare experts, photographers and this year, for the first time, we had some keen younger judges through our partnership with Animals Friends Pet Insurance, which was brilliant and important and something we want to continue going forwards. Each judge scores the images out of 20 and then we add them up. The winner is the one with the biggest score. It is remarkably simple and unscientific – thank goodness!”

“Sit” by Suzi Lonergan. “Our granddaughter gave the command to sit. Beau is very obedient.” 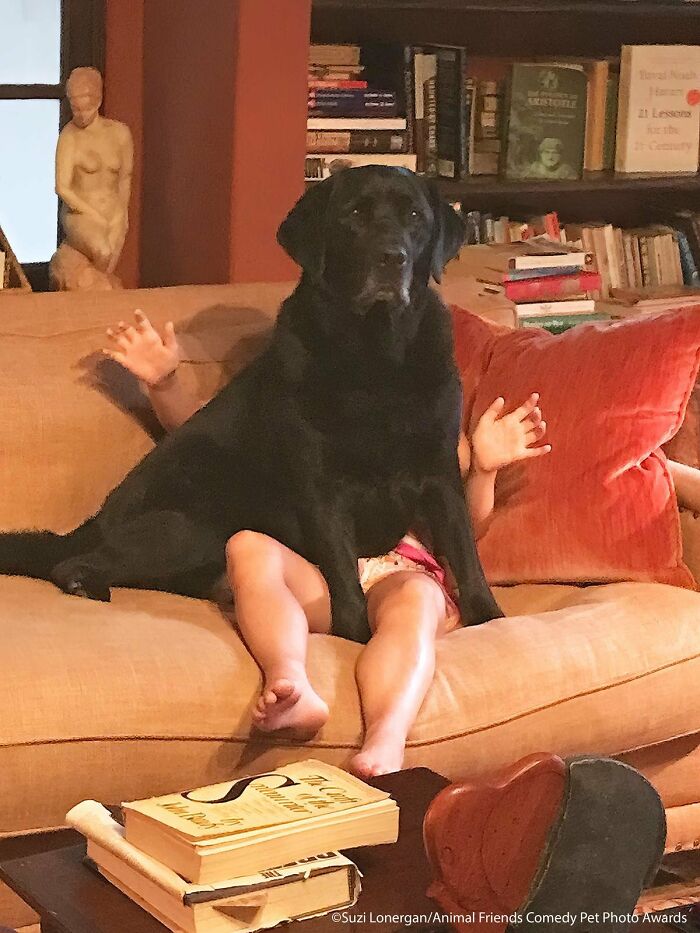 “…That was a good one!!” by Jakub Gojda. “This photo was taken by accident during the photography of my ex-girlfriend with her beloved mare. For this cheerful moment, I thank the fly that sat on the horse’s nose and he instinctively shook his head. And so it seems that the humor between a horse and a woman is definitely not missing :)).” 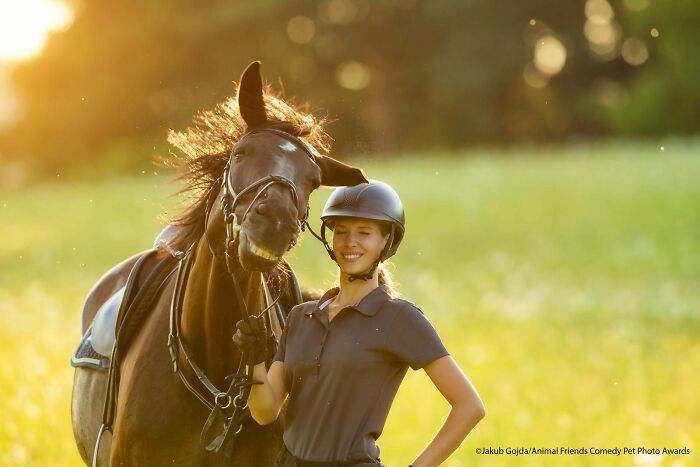 Then, we were curious to find out how the idea of the photography contest came to be.

“It was following the success of our other sister competition Comedy Wildlife Photography Awards, which had been running for a couple of years, and Paul Joynson Hicks, the other co-founder and I suddenly thought, why not do the same but for pets? And the Comedy Pet Photo Awards was born. Pets are such an important part of our lives and being more accessible perhaps than wildlife, we can get more people involved and engaged to do something for pet animal welfare and raise a smile or two in the process.”

“Ostrich style” by Manel Subirats Ferrer.“Little Nuka playing hide and seek one day at the beach” 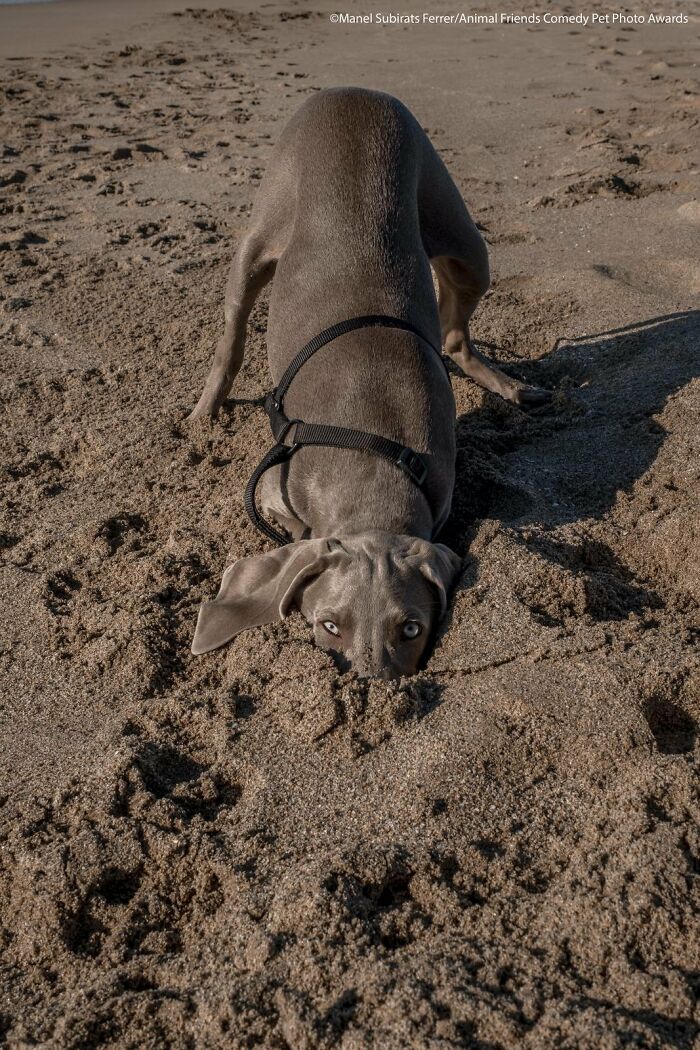 “Wine Time” by Kathryn Clark.“It’s that time of day again! Little Blue enjoys it almost as much as me :-)” 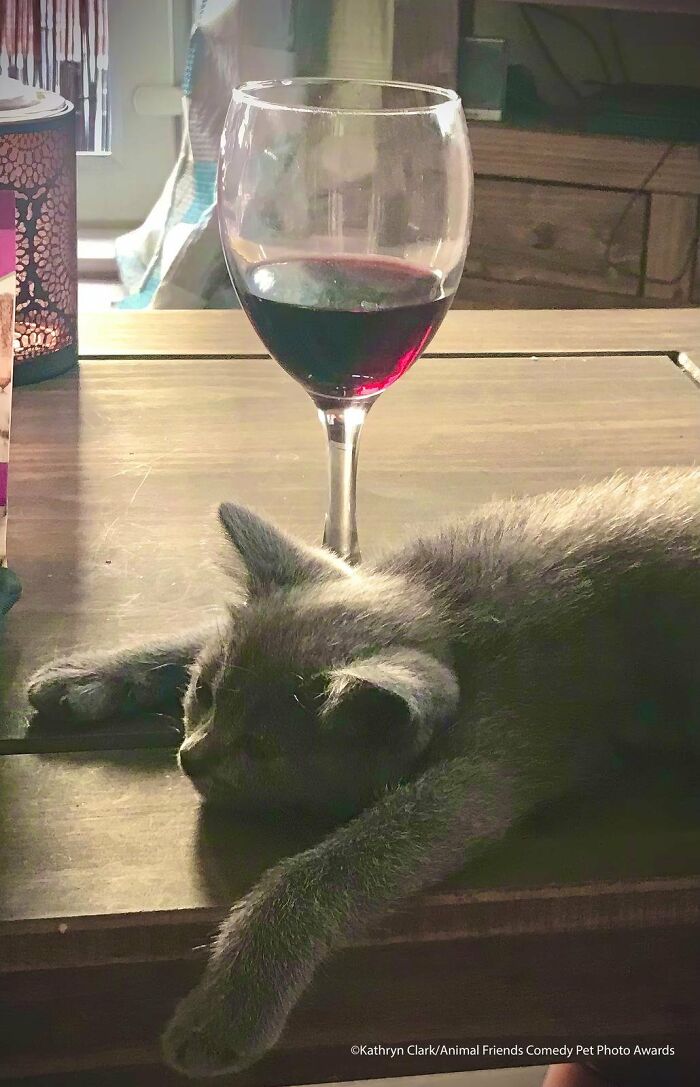 Given how new yet popular the contest is, we were wondering whether it was the first year Tom and all other co-founders were hosting it.

“No, this is actually only the second consecutive year, although we did have the very first one in 2017 as a one-off. The competition is very, very young still and we are really keen to grow it and for it to become a staple in the photographic competition calendar. Why not?!”

Given the chance, we also inquired about the number of entries the judges received.

“We received 2100 entries from 49 different countries.”

“Photobomb,” by Kathryn Trott. “Jeff stealing the limelight from his brother Jaffa.” 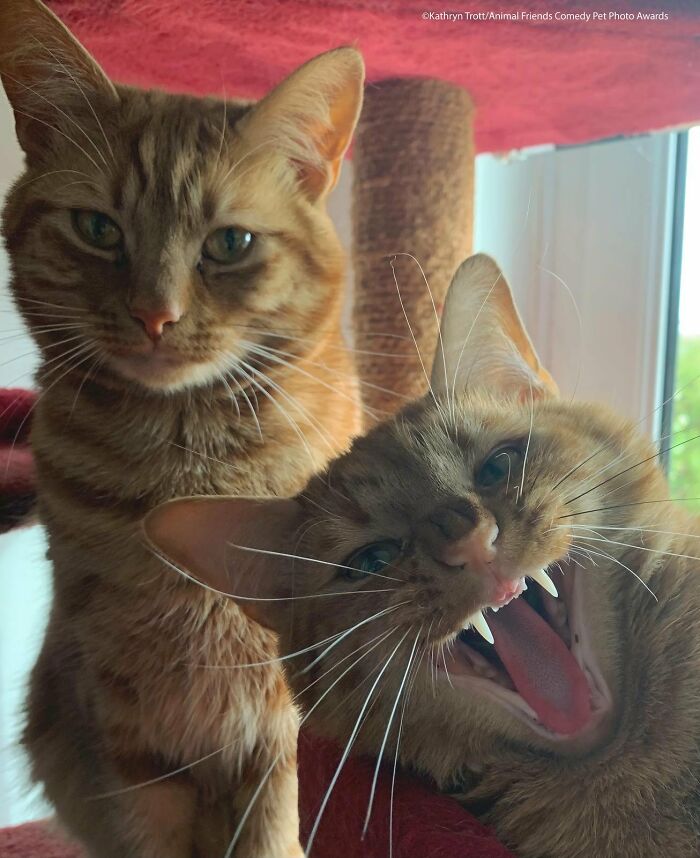 #7 All Other Creatures, Great Or Small Category Winner

“The Eureka Moment,” by Sophie Bonnefoi. “Cutie and Speedy are 2 chicks hatched from eggs placed in an incubator at home in August 2020. They spent their first few weeks indoors. On the photo they are just over 2 weeks old. They were curious about everything. This is the day they discovered their own shadow. It was hilarious to see them wondering and exploring that ‘dark thing’ that was moving with them!” 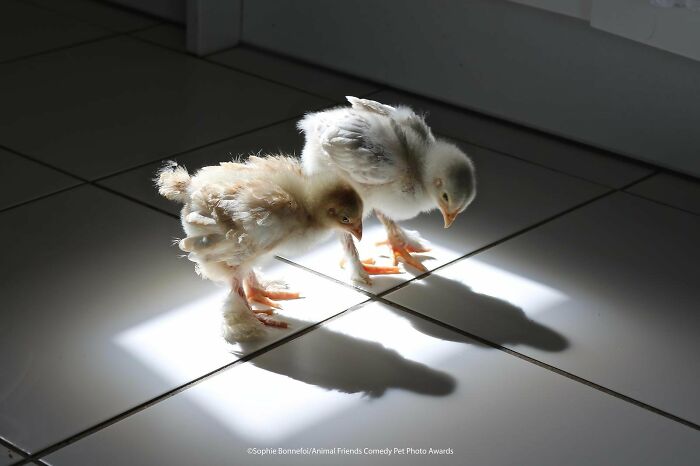 One would think that organizing a photography contest might leave the co-founders with some challenges, but Tom was quick to reassure us: “Not really. We get to see wonderful, heartwarming and often hilarious images and videos from all over the world of people appreciating and celebrating their pets – it’s a very positive thing to be involved in – we love our jobs!”

“Nosy Neighbor” by Colin Doyle.“According to Ozzy we need a new fence panel ASAP. He is fed up with Chester our nosy next door neighbour spying on him every time he has a meal.” 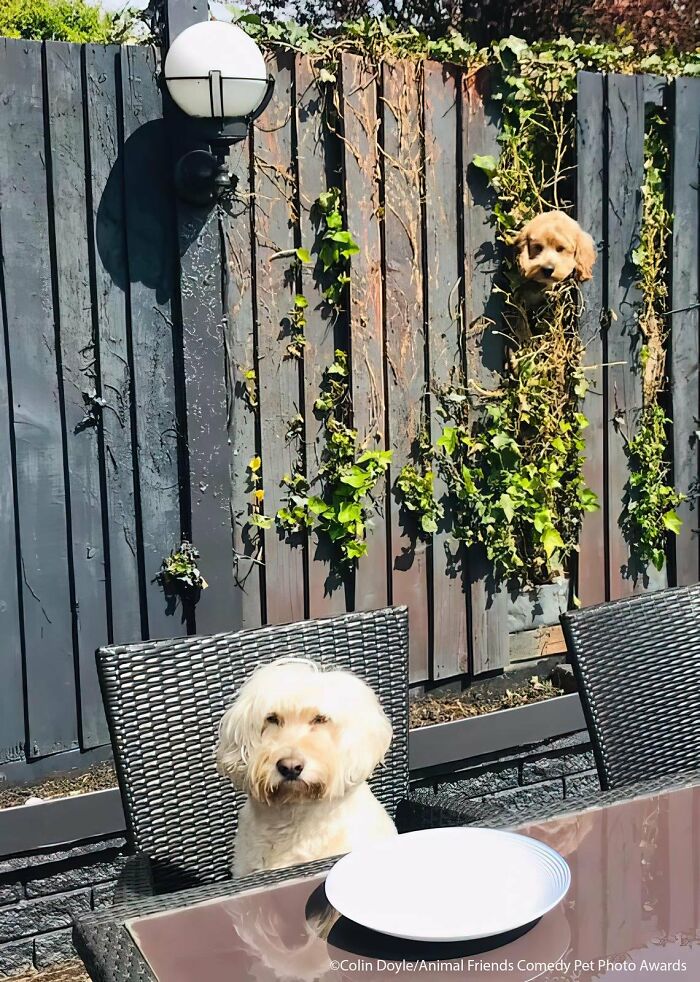 “I said ‘Good Morning,’” by Mary Ellis. “I like to visit the stable horses before I begin my hike at the State Park…this is the reply I received when I said Good Morning.” 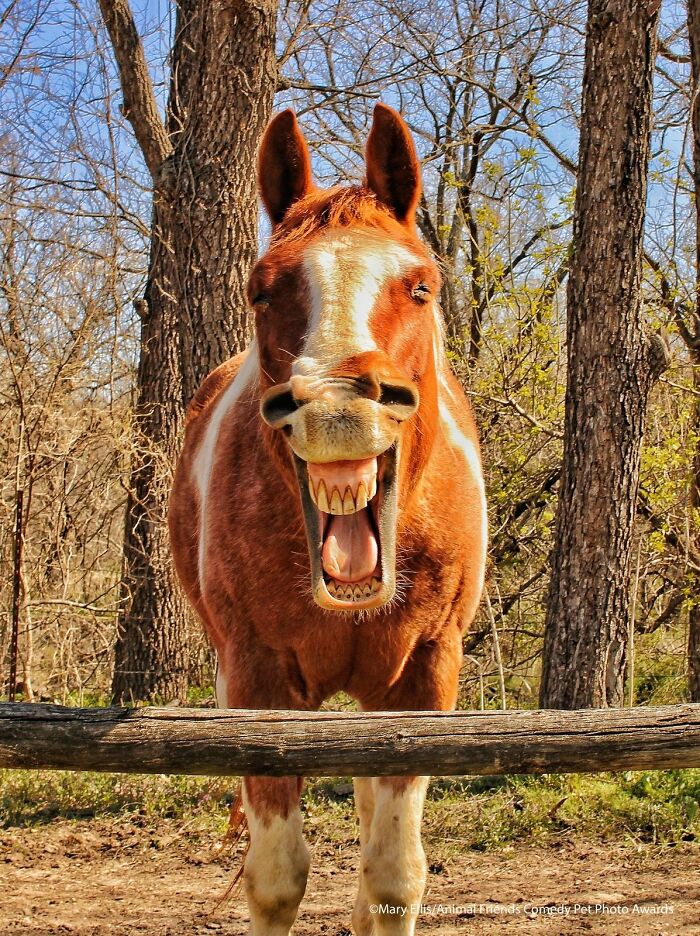 Given how the pandemic has affected so many things in life, we were curious whether it posed any positives or negatives to the photography contest.

“It has meant that we haven’t been able to plan for an Awards Night, which would be a brilliant way to cap off the year, but maybe next year. In terms of images/videos entered, we have seen a huge increase in dogs, particularly puppies entered because of people acquiring dogs while they were working from home. In a way, it is fitting that the winner is a puppy!”

Hugo The Photobomber! By Chloe Beck.“This is my best friend Faith and her husband Alex… And their cheeky Sproodle, Hugo. Faith wanted a photograph to mark a special occasion – her first outing after shielding at home for 14 months. Hugo jumped into the frame at just the right moment! He’s a lockdown pup, so he hasn’t quite gotten used to the excitement of being around other people yet hehe :-)” 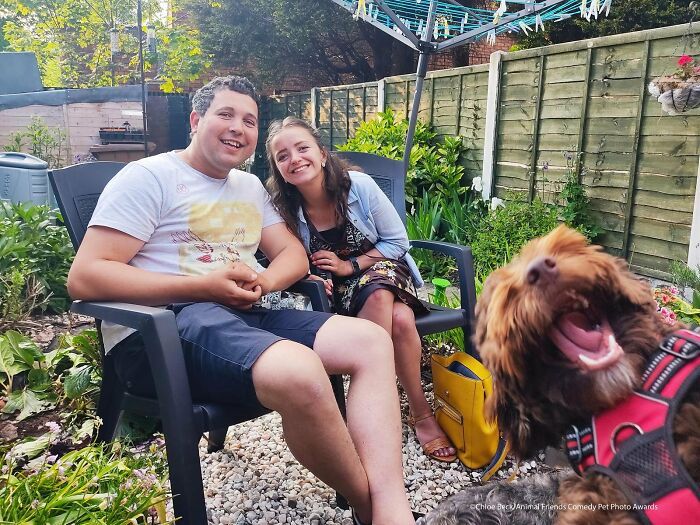 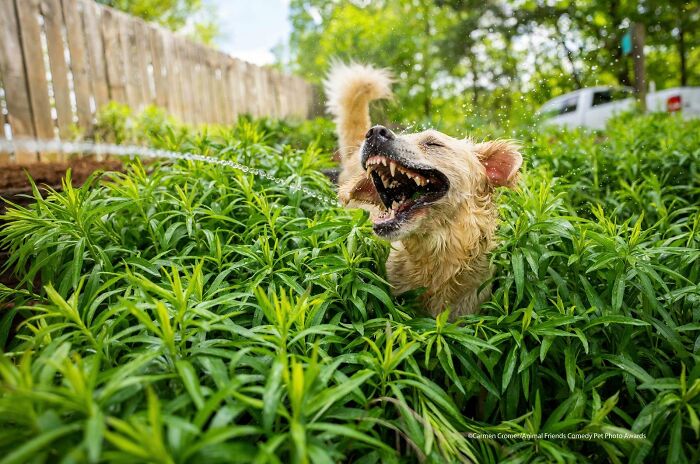 Finally, we wanted to know which of the photos was the personal favorite of Tom’s even if it didn’t make it to the final cut.

“One of my favorites that was a finalist but just missed out on the Grand Winners Titles was the Cat Model by Kenichi Morinaga (click here to see the picture). The expression is definitely that of a supermodel with attitude!”

“Photo bomb” by Mollie Cheary.“Bailey was so excited to see her friends, she couldn’t sit still for a photo!” 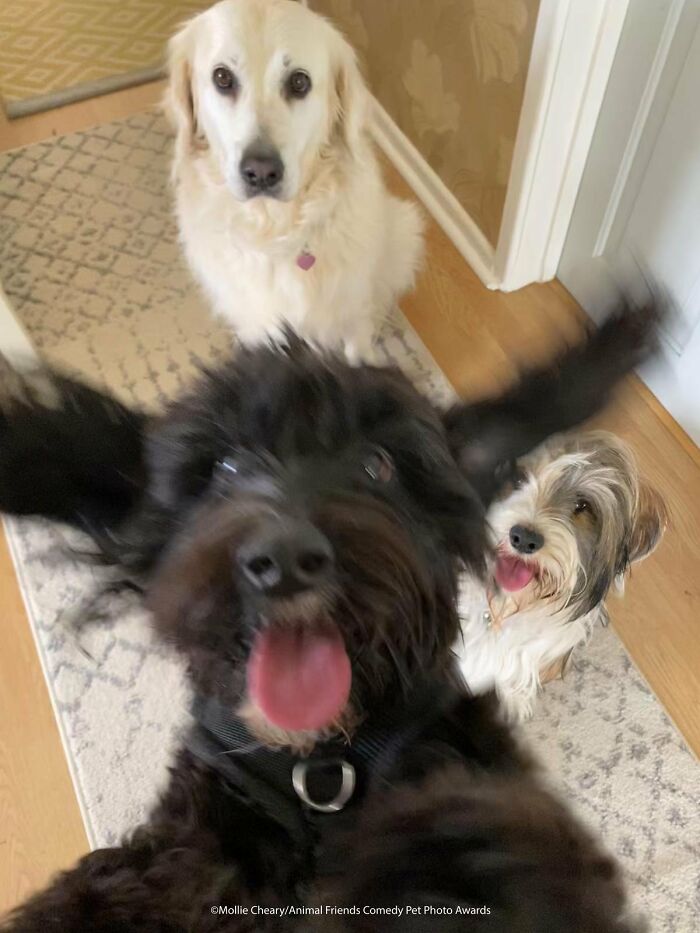 “Crazy in love with fall” by Diana Jill Mehner. “This is Leia. As you can see, she definitly love playing with all the leaves in autumn – and yes it was really tricky to take this picture because you never know where the dog will act and what it is going to do next :D” 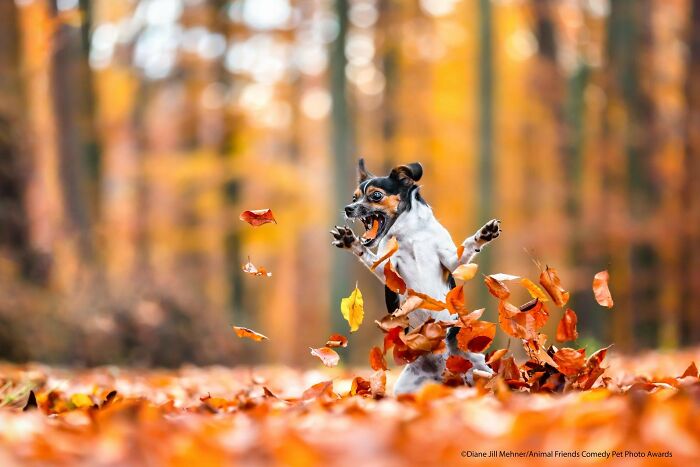 “Muttford and Chum” by Luke O’Brien.“Losing the opportunity to play with my human band mates during lockdown, Flint my rescue dog soon taught me that we didn’t just have sharp bones in common, but musical ones too. He soon became the perfect substitute for a collaborative stomp up at home, so much so that we felt we deserved our own band name (Muttford and Chum). With my camera set up remotely during this shoot, I think it’s fair to say that the image is proof that his conviction as a performer matches my own – well, we were covering ‘treats and tugs and dinner bowls’ by Ian Puli and the Boneheads.” 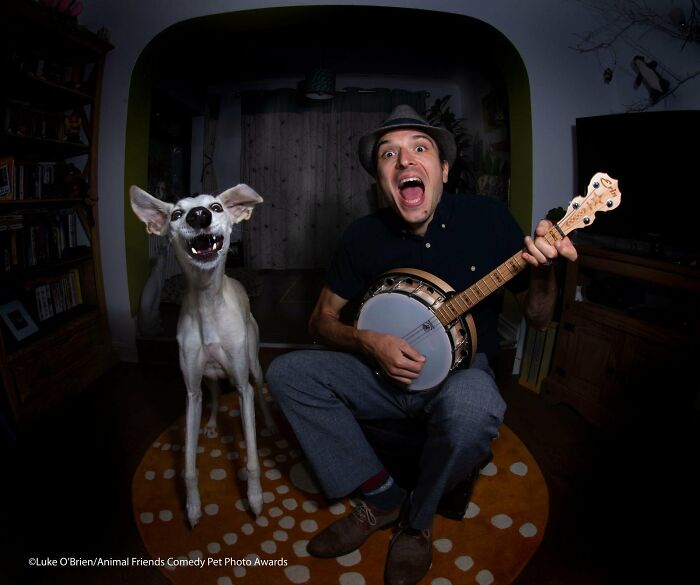 “Excuse me, Could we Have our Ball Back please?” by Christine Johnson.“Star and Will trying to get their ball back from one of the Crosby statues.” 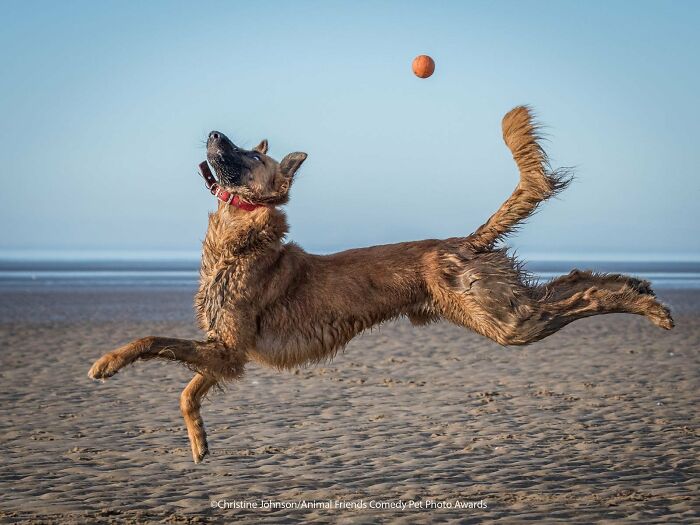 “A Warm Spot on a Cold Day” by Corey Seeman.“Two of the morning regulars at the dog park are Gary (hound mix with the jacket) and Kona – who is one of the most chill dogs ever. Got this picture of Gary finding a warm place to sit on this cold winter’s day – February 9th, 2021.” 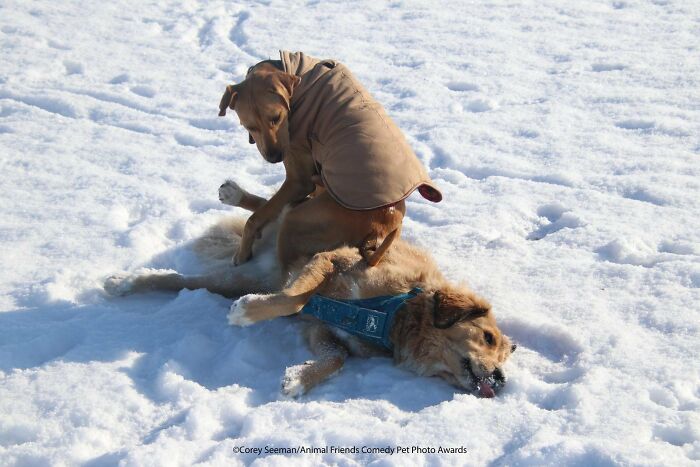 “So what?” by Lucy Slater.“Vincent the cat..This is how I like to sit!” 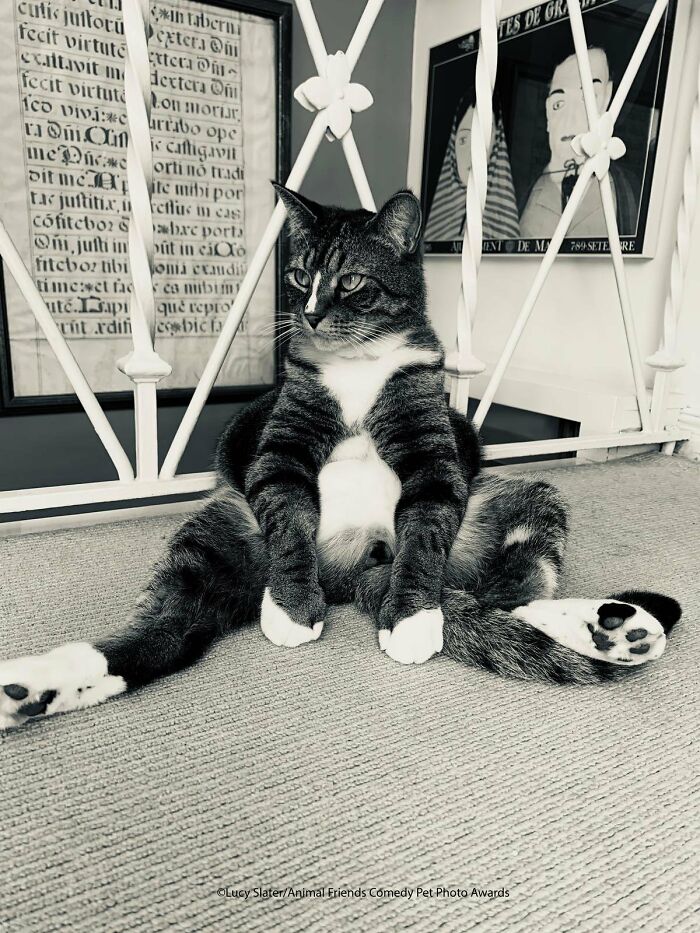