There are three things you can look at forever – how fire burns, how water flows, and how tenants in rented apartments resent their landlords. Of course, sometimes there are also bad tenants, but usually, landlords are the source of problems in such conflicts…

Perhaps you did not know that Dante was going to put picky landlords in a separate, tenth circle of hell but decided not to do this, because he also rented an apartment and did not want to quarrel with his landlord just to get his deposit back (but this is not exactly true).

But the heroine of this video on TikTok, a blogger with the nickname kay1331, was absolutely afraid that her deposit for a rented apartment would not be returned. The video shot by this woman went viral, gaining 283.9K views and almost 44K likes so far. 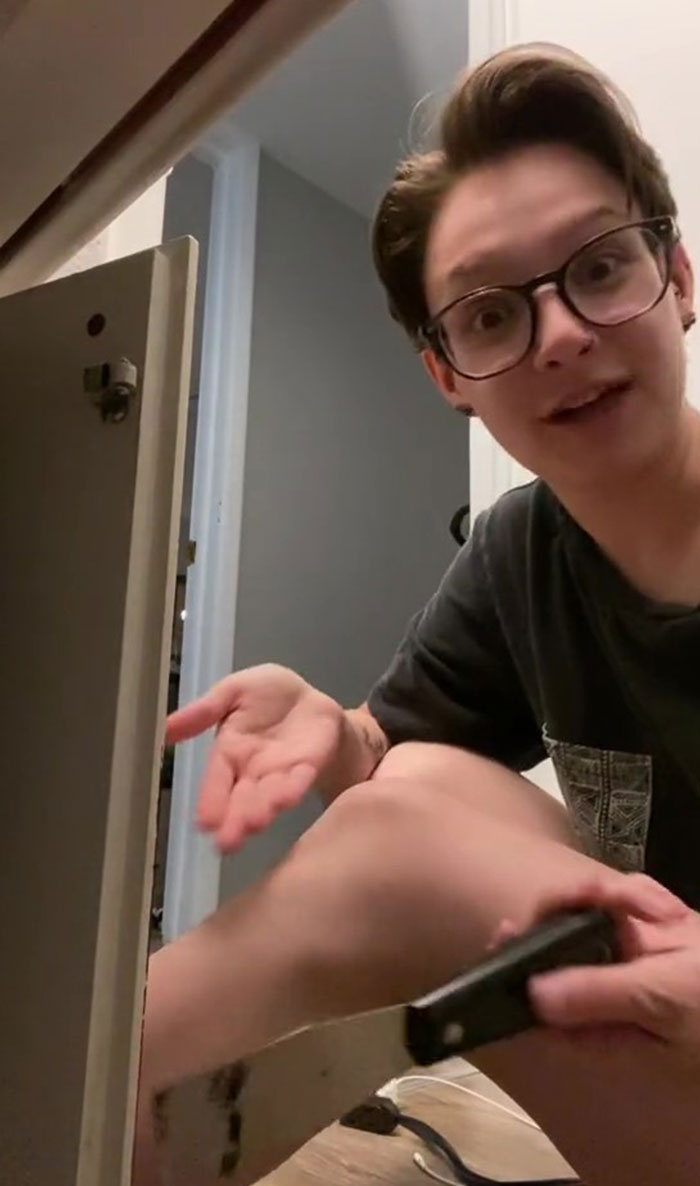 The Original Poster admitted that she used paintable wallpaper, and when she took it off, there was a little line of black paint around the edge. As a result, the woman had to literally scrape off the black layer of paint.

The thing is that the OP is afraid that if there’s even the slightest problem with the paint, her landlord will refuse to return the deposit. According to the woman’s own words, anyone who has ever rented an apartment knows that landlords are ready to take a deposit for literally anything.

According to the latest research, almost 40 percent of tenants lose their deposits annually

By the way, the OP is not far from the truth. So, for example, according to a large-scale survey conducted by the British company Hillarys, approximately 29% of all tenants surveyed lose their deposits every year, which amounts to more than $1 billion. 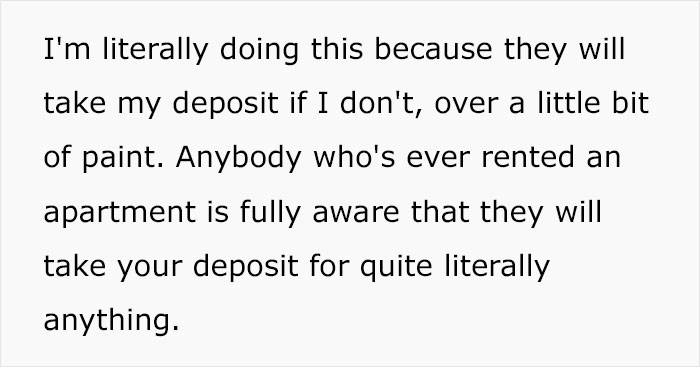 The most vulnerable category of tenants is young people and students. For example, last year, as another survey made by StudentTenant shows, four out of ten students lost part of their deposit or even the entire amount. 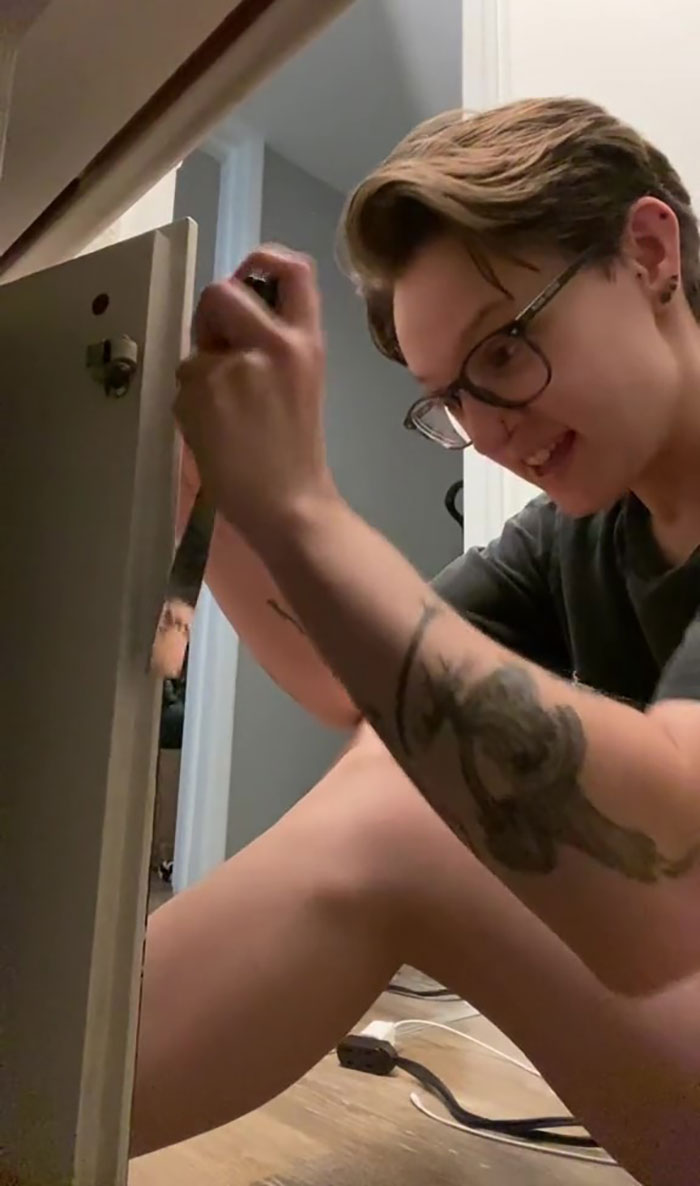 There are several reasons why a landlord could take your deposit

According to the researchers, professional cleaning, damage to fittings, excessive wear and tear and unpaid bills are most often the reasons for non-refund or withholding of a part of the deposit. But this, of course, is if the landlord behaves decently enough.

Be that as it may, in order to protect yourself from dishonest landlords, it is advised to take pictures of the condition of the apartment right after the contract signing and resolve any issues which may arise as quickly as possible. So the OP is absolutely right about scraping off the black paint – that might work well.

Actually, commenters on the OP’s video also claim that landlords are willing to withhold deposits in any case – for example, to clean carpets and drapes, even if you cleaned everything yourself beforehand. Deposits are not returned for the smallest of reasons – and a paint drip may well be one.

One of the people in the comments, by the way, wrote that she deliberately took a number of pictures and a full video immediately after moving into the apartment – just in case to prove that she was not the cause of any problem. Let’s just hope this works… 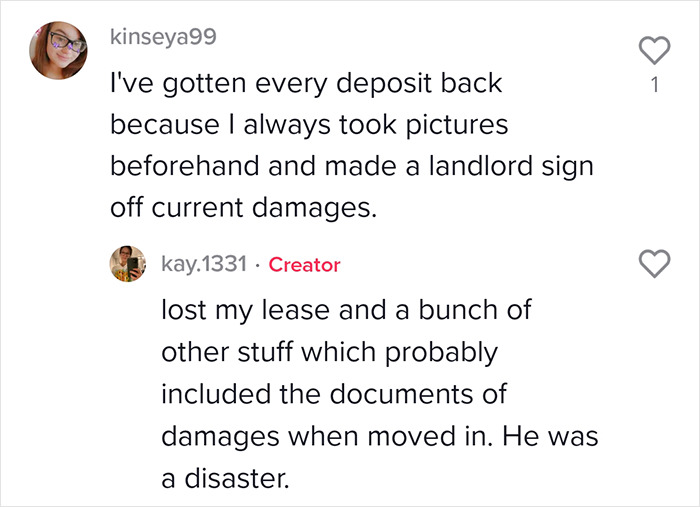 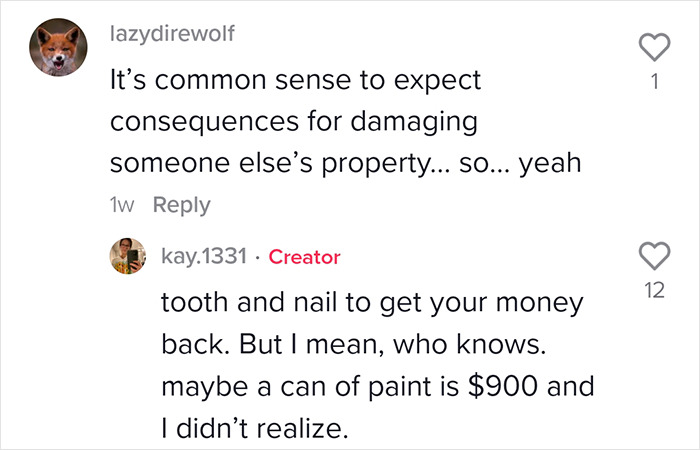 Well, if the issue of landlords and tenants looks interesting to you, you can delve further into the topic and read the post about how a management company required this tenant to sign the inspection form literally in the blind, otherwise, they would refuse to give the keys. However, owning a home is not a universal solution either – and this post of ours is the best proof of that. In any case, any comments are highly appreciated.

The post “I’m Literally Doing This Because They Will Take My Deposit”: Woman Talks About Renting An Apartment, Says Landlords Will Withhold Deposits For “Anything” first appeared on Bored Panda.