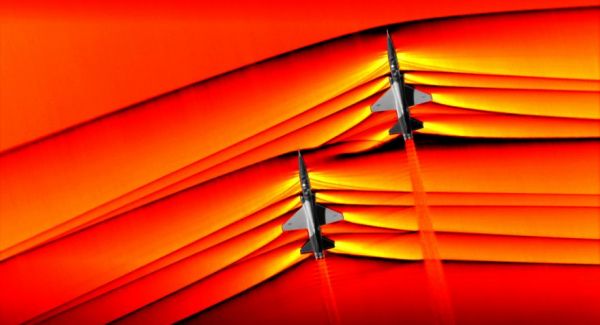 Who would imagine that you could take photographs of shockwaves? NASA, that’s who. Ten years of research and development went into the picture you see here, which is a colored composite image of pair of supersonic planes flying under strict parameters in order to achieve the pictures, taken from an accompanying plane.

The images feature a pair of T-38s from the U.S. Air Force Test Pilot School at Edwards Air Force Base, flying in formation at supersonic speeds. The T-38s are flying approximately 30 feet away from each other, with the trailing aircraft flying about 10 feet lower than the leading T-38. With exceptional clarity, the flow of the shock waves from both aircraft is seen, and for the first time, the interaction of the shocks can be seen in flight.

“We’re looking at a supersonic flow, which is why we’re getting these shockwaves,” said Neal Smith, a research engineer with AerospaceComputing Inc. at NASA Ames’ fluid mechanics laboratory.

“What’s interesting is, if you look at the rear T-38, you see these shocks kind of interact in a curve,” he said. “This is because the trailing T-38 is flying in the wake of the leading aircraft, so the shocks are going to be shaped differently. This data is really going to help us advance our understanding of how these shocks interact.”

The data will be used to develop supersonic flight that creates no sonic boom, which has restricted such flights in US airspace. There are probably plenty of other uses that they aren’t yet talking about. Read about the new technology at NASA.   -via Gizmodo