On Monday, November 8, 2021, Tuvalu’s 38-year-old foreign minister Simon Kofe, knee-deep in seawater, begged the world to save countries like his from being run over by rising sea levels caused by global warming. Three months, two weeks and one day later, Russia’s 69-year-old president Vladimir Putin responded by attempting to run over Ukraine, sporadically bombing out cities and wrecking the lives of millions of innocent people. Beyond causing Europe’s worst humanitarian crisis in recent memory, Putin’s actions—whether assessed by the C02 emissions of his military’s carnage or the fact that he has triggered a new arms race in Europe—has set the world back in the race against time to mitigate the climate crisis. How can designers help remedy this situation?

The world’s military industry is one of the earth’s chief polluters. “The world’s militaries combined, and the industries that provide their equipment, are estimated to create 6% of all global emissions,” said The Guardian in November 2021, citing Scientists for Global Responsibility (SGR). One of the most insightful pieces of information in the SGR’s report—published in 2019—was its claim that the emissions of the world’s leading militaries are grossly under-reported. It put the USA military’s total annual carbon footprint at 205m tons, 150m tons higher than the USA’s official estimates. “If the US military were a country, its fuel usage alone would make it the 47th largest emitter of greenhouse gases in the world, sitting between Peru and Portugal.”

There are no emission estimates for China and Russia. Both countries, as well as several other significant military spenders, are much less transparent. But the bottom line should worry anyone who cares about the future of our planet. “I estimate that the carbon emissions of the world’s armed forces and the industries that provide their equipment are in the region of 5% of the global total. But this does not include the carbon emissions of the impacts of war,” said Dr Stuart Parkinson, the Executive Director of the SGR. Two years since the SGR’s report and Dr Parkinson’s statement, there’s a massive all-out war in Europe and a new arms and energy race is on course; only the worst can be expected for emissions from the world’s militaries. Yet, it is possible to imagine a better scenario where we don’t compromise our security architecture and yet bring down its current unsustainable cost in carbon emissions.

Today there are two main sides to the debate between sustainability and security. The former is dominated by voices totally opposed to investments in the military so much that pro-planet exclusively equals anti-war. The latter is largely stuck in the old ways of conventional industrial militarism that, just as seen in the Paris Climate deal, seeks to entirely exempt our security architecture from any climate or sustainability conversation. The result has been that sustainability-driven design thinking, which today shapes virtually every other sector of our society, is yet to make it to the frontline of our security architecture. Many of the world’s best designers, who often are climate activists themselves, don’t want anything to do with weapons. And the world’s leading military industries are not the most eager to embrace sustainability design-thinking. That needs to change. Collaboration is the best path for the future of our planet. 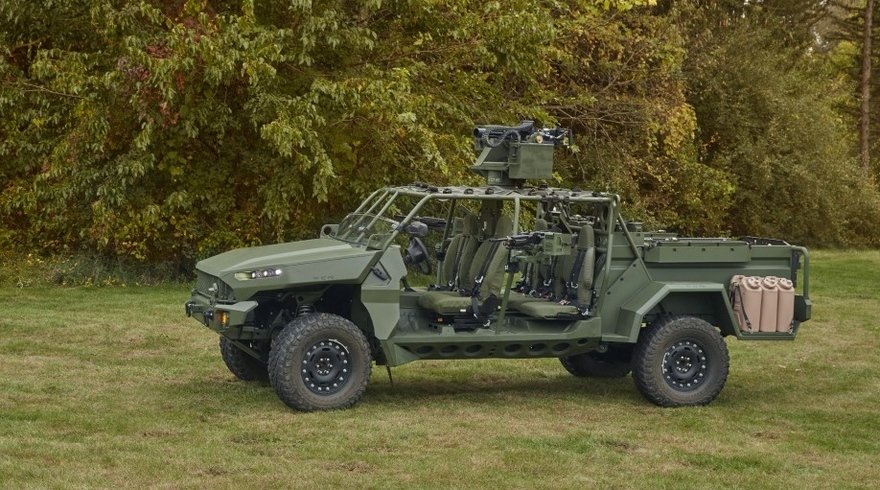 Since Russia invaded Ukraine, its European neighbors have announced new defense shopping sprees. The EU has adopted a new security strategy that will create a joint response force by 2025. The plans seem like a revisiting of the Cold War, not only because of the familiarity of the foe. There is no real structural innovation; we are only seeing an incremental upgrade of military infrastructure and an expansive purchase of existing equipment. In the short term, these measures may assuage public worries about security, but they will be disastrous for sustainability efforts in the long term. President Biden is pushing for electrification of non-tactical vehicles. This opens the door for sustainability-driven design and a radical reimagining of our security architecture.

The great thing about design is that it is never shy of questions with seemingly impossible answers. Sustainability-focused designers can crack the code on creating military systems with little to no need for combustibles and green machinery that serve military and socio-economic purposes. There are low hanging fruits just by being inspired by nations with less resources: Iran’s fuel efficient ground-effect vehicles could be one such source of inspiration; and although bicycle regiments have been disbanded at large, with the advent of electric bikes their flexibility and green credentials should be revisited. Within mobility at large a host of new machines and modalities are being invented and explored. The eVTOLs are already playing a massive role in armed combat and a bunch of other solar powered off-grid innovations are just waiting to be properly designed. Design’s inherent ability to integrate systems can also lead to a holistic approach to integrating hybrid conflict abilities directly under one UX interface that could be designed to help us reduce the physical size of armies without hampering their deterrence capabilities. And ideally behavioral and systems design can help us reduce armed conflict at large. In essence, design-thinking can help transition militaries and the industries they depend on from earth’s chief polluters to its frontline defenders. There will be no greater security achievement than that.

Interestingly, the U.S. Army released its first-ever climate strategy barely 14 days before the Russian invasion of Ukraine began. It, among other things, plans to slash the Army’s emissions in half by 2030, electrify all noncombat vehicles by 2035 and develop electric combat vehicles by 2050. That’s a start, but more needs to be done fundamentally. As leaders and military industries hash out how to spend the renewed splurge on defense, we need the biodiversity-loving, emissions-loathing and future-focused designers in the room.