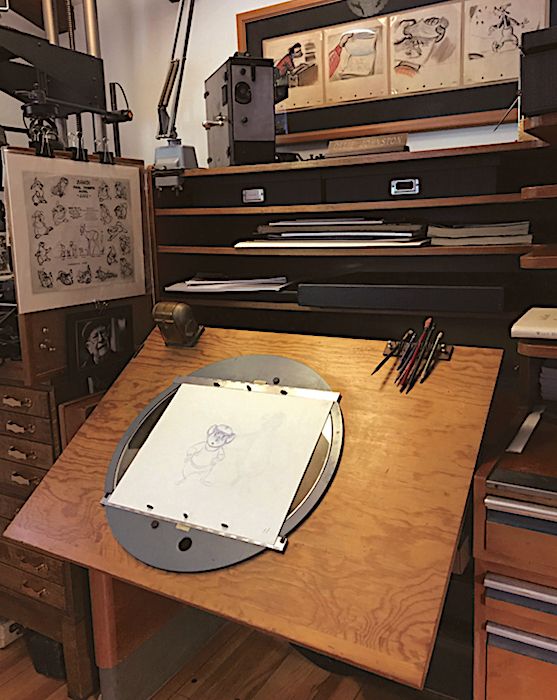 After the success of Snow White and Seven Dwarfs, Walt Disney opened a new animation studio with all the modern work amenities that 1938 had to offer. The architect was Kem Weber, who designed everything from the building’s orientation to the furniture with animators in mind. Dave Bossert was a Disney animator during this time, and now the author of the book Kem Weber: Mid-Century Furniture Designs for the Disney Studios. He talked about the Kem Weber Compact Animator’s Desk, which he used for 30 of his 32 years with Disney.

Some of the coolest features of the Animator’s Desks, though, had nothing to do with the artistry and craftsmanship of animation, at least not directly. Consider the stainless-steel “cigarette guard” that protected the edges of certain shelves from burn marks, caused when animators would lay down a cigarette and then forget about it while they got lost in the details of a particular drawing. According to Bossert’s book, cigarette burns had been a big problem on desks in Disney’s Hyperion Studios, so much so that Weber included a stainless-steel cigarette guard in his design for the desks at the new studio in Burbank. (In 1939, the radical idea of going outside to smoke apparently did not cross anyone’s mind.)

Other design touches performed dual roles. While the desk’s recessed drawer pulls represented a handsome touch of Streamline Moderne for which Weber was so well known, they also made handy bottle openers for a late-afternoon beer. “I opened many a bottle on my drawer pulls,” the author confesses. Similarly, it was also apparently no accident that one of the desk’s cabinets was just the right height for a bottle of Scotch.

Read about the studio project and the various types of desks specially built for Disney animators at Collectors Weekly.